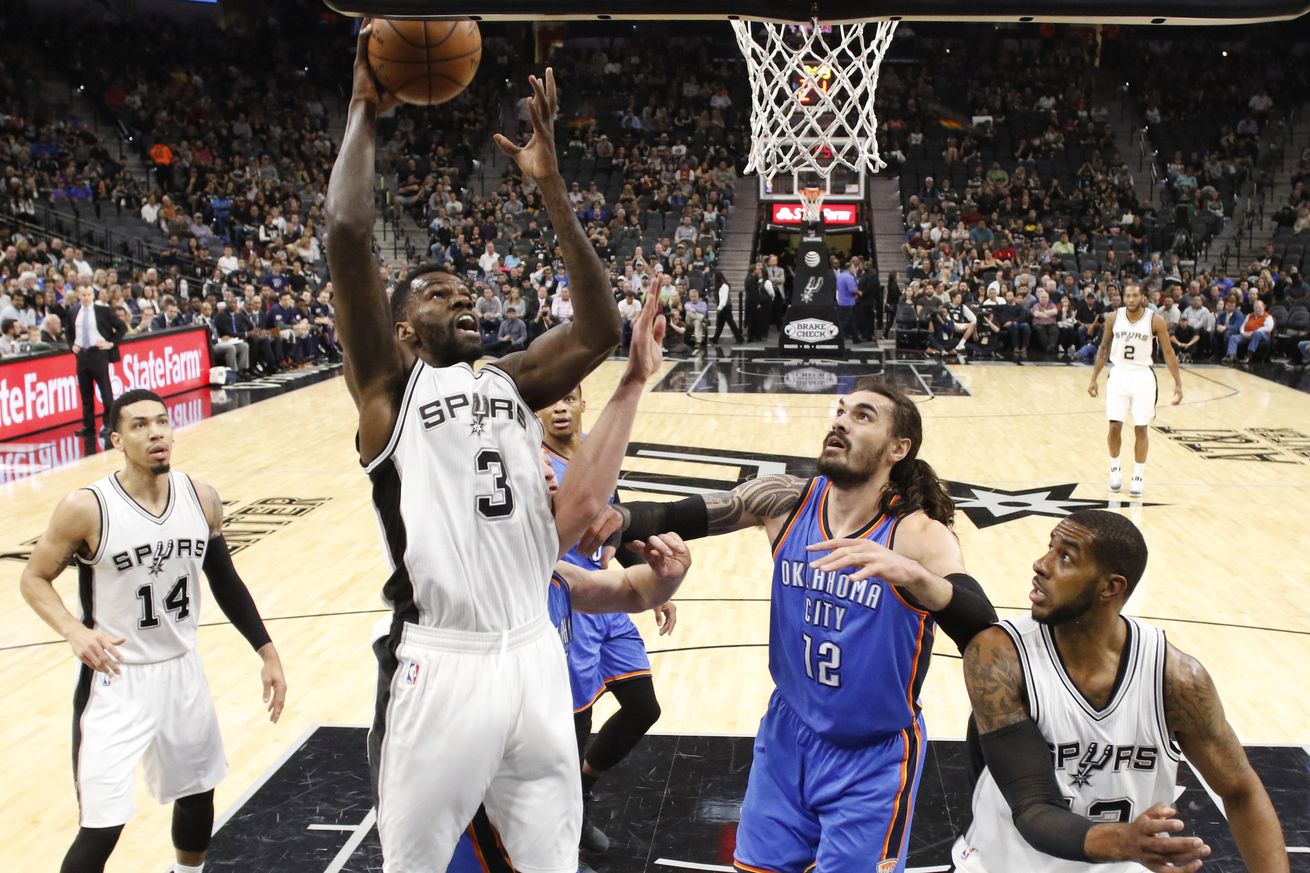 It’s no surprise this unit plays well together, but how much will we see of it once Pau Gasol is back to full strength? And who should the fifth guy be?

Over the first 41 games of the season, the foursome of Kawhi Leonard, LaMarcus Aldridge, Danny Green and Dewayne Dedmon played a total of 60 minutes together. That shouldn’t really be a surprise considering the last component, Dedmon, was (rightly) sitting behind Pau Gasol and David Lee in the depth chart and getting most of his run with the second unit.

Still, it became clear early on that Dedmon’s defensive upside merited more play with the starters, to see precisely what the Spurs had in the 27-year-old journeyman who was making plays like this and this a common occurrence.

That Gregg Popovich wasn’t immediately replacing Pau Gasol for the raw Dedmon makes sense, even if you move beyond the politics of benching a future Hall of Famer who the team had just signed to a $31 million deal in the offseason. Even while still getting acclimated to the Spurs system, Gasol makes San Antonio a potent offensive team and is (IMHO) only part of the problem defensively. In his absence, the team’s offensive rating drops from top five to 24th in the league, and that’s a problem.

Gasol’s finger injury before the Nuggets game last month has given Pop more room to experiment with his frontcourt. David Lee got the first six starts and, while he’s been fine, the shift to starting Dedmon is especially exciting, not only for how good he’s been but how he fits with the starters.

Since Pau’s been out, the quartet has shared the floor for 69 minutes, all of that over the last five games in which all four guys have suited up (Kawhi missed the Memphis game and Aldridge sat out one against Philly). And while the sample size is small, and in spite of a terrible outing against New York, that unit still boasts a +18.3 net rating.

Having four plus-defenders on the floor is beneficial no matter what, but the Spurs’ defensive scheme of overplaying at the three-point line really benefits. When breakdowns occur, guys are ready to rotate and can make plays both below and above the rim.

The Leonard-Green-Dedmon-Aldridge foursome has been getting a lot more run with Gasol out. That’s exciting. pic.twitter.com/3WQ0gw1eaI

Leonard’s defensive reputation precedes him; Green is probably the best 3-and-D player in the league; Aldridge is still underrated for what he does—-Dedmon is the X factor here. Putting him alongside Aldridge makes life easier for everyone, and he’s proved to be a tremendous on-ball and help defender while staying out of foul trouble (one of the biggest knocks on him throughout his career). At the moment, Dedmon leads all rotation players in the league in defensive field-goal percentage plus-minus, with opponents shooting 8.3% worse when he’s in the vicinity. He’s averaging under a block per game but has come in with a number of plays like this, altering shots around the basket.

Dedmon got credit for 2 blocks tonight, but he altered a number of other shots all game long pic.twitter.com/38rNeqR2RD

He’s also proven his value at the other end, as a capable finisher on pick and rolls. I’ve been especially encouraged by plays like this, where he doesn’t rely on the lob to score.

One pleasant surprise with Dedmon: seeing that he doesn’t need to rely on the lob to finish a PnR pic.twitter.com/ozVmquVkRE

He can make teams that overplay the lob pay in multiple ways. His skills as a rim-runner attract their own kind of gravity, and that in itself is starting to open up things for the offense.

This is how a big man with limited range has ‘gravity’, by being a great roll man. Lee’s man gets sucked in here. pic.twitter.com/G0WZSsAP2x

The idea of Gasol coming off the bench (or at least going to the bench in late-game situations) is starting to make sense. The venerable Jesus Gomez floated that idea to us before the season started, and it’s hard to ignore the idea of throwing Dedmon out there with the team’s three best all-around players.

Who would that ideal fifth man be? The conversation has to start with Tony Parker, who’s spent most of the 69 minutes we’ve seen of Leonard-Aldridge-Dedmon-Green. Parker’s penetration and intuitive feel for the offense open things up for Aldridge, and the Wee Frenchman has shown he can still get into the paint and finish. Playing him more with these four also means less minutes of him and Pau sharing the floor together, which will matter defensively against the elite teams the Spurs will face in the playoffs.

If we’re talking about optimizing that lineup to finish games, however, there could be better options. Patty Mills brings the spacing and more off-the-ball movement, but lacks Tony’s playmaking ability, especially in the pick and roll. Manu Ginobili brings more on the defensive end than both, as well as the spacing. The defensive supernova option (which will be resoundingly unpopular with a number of Spurs fans) might be Kyle Anderson, who leads all shooting guards in Defensive RPM but lacks the primary playmaking abilities that unit would need, unless they want to put the ball in Kawhi’s hands more. The point is: the Spurs have options, which speaks to the depth and versatility of a roster that was incredibly put together, given the foundation-rattling shakeup of Tim Duncan’s retirement and a seven-player turnover over the summer.

Dewayne Dedmon recently had his best game as a Spur (17 points, 17 boards, 2 blocks on 8-of-10 shooting in a win over the Pistons), so it’s easy to get ahead of ourselves. The Spurs are a very good team, even if they intend to bring Pau back into his normal role once he comes back, and the offense would get better if he does. In the meantime, though, we’re getting a glimpse of another iteration this Spurs team can roll out in the postseason, and it’s one that should have fans excited of the understated potential they’re yet to realize.