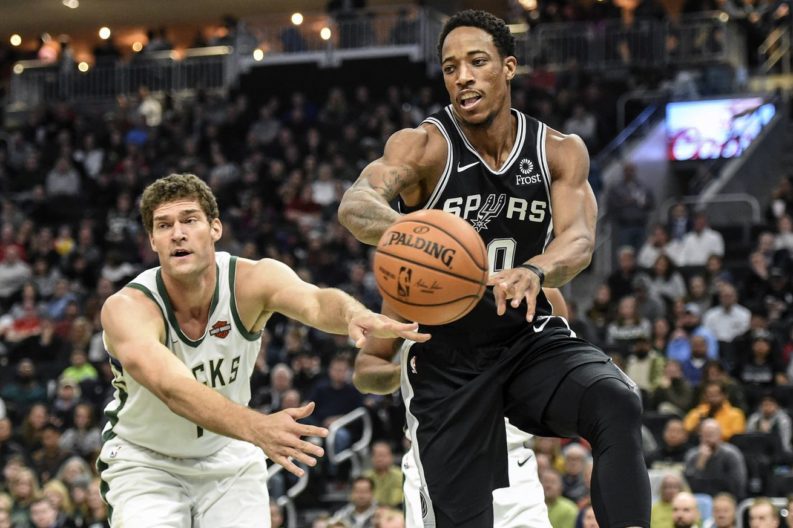 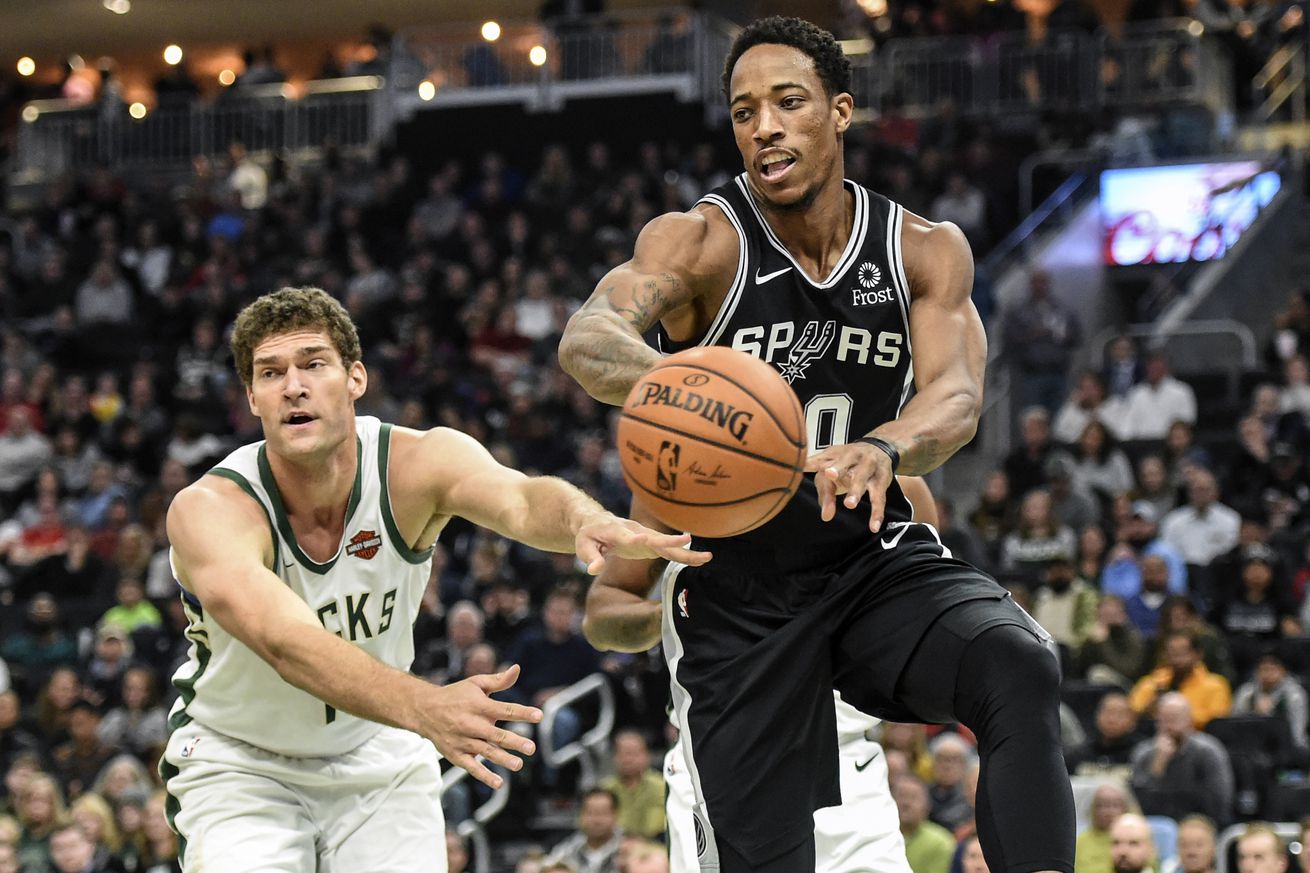 The first of the post-Big 3 era.

As covered at the end of our last playbook, the Spurs, in line with what appears to be a league-wide trend, have been running more pick and rolls with the strong side corner empty. On Saturday night against the Bucks, that setup led to one of the most spectacular plays of this young season: DeMar DeRozan’s cold-blooded baptism of Giannis Antetokounmpo.

THROW IT DOWN DEMAR pic.twitter.com/NZpTA7jnz5

DeMar has the ball on the right wing and LaMarcus sets up for a screen back towards the center of the floor. Malcolm Brogdon stays up on DeMar like he’s expecting help baseline, even though Brook Lopez remains on the other side of the screen to contain DeMar if he comes towards the middle of the court. Once DeMar takes off for the rim, Lopez motions to Giannis to rotate, and this is likely what Brogdon expected. Giannis is a hair late though and by the time he arrives, DeMar is airborne. DeMar cocks the ball back to avoid Giannis’ outstretched hands, then slams it home. Here’s another angle.

That wasn’t the only time the Spurs used that setup, though. With under 5 minutes to go in the 1st quarter, Jakob Poeltl set a screen for Patty Mills in a similar location, though in the other direction.

With this setup, Jakob’s roll is into the middle of the floor, making it easier for the Bucks to help. Still, Patty has a window for the pocket pass, and if Jakob can make the catch, he’ll have 6’7” Tony Snell between him and the basket, and 2 shooters on the left side of the floor with only 1 defender. Instead, Patty swings the ball to Davis Bertans up top, who pivots into a dribble hand off with Marco Belinelli. Marco pauses for a moment to size up the defense, and for a brief second, it looks like he and Davis are going to run their own pick and roll with the strong side corner empty.

But then Davis clears out to the left corner and Jakob flashes into the paint. Marco gets Jakob the ball at the free throw line and Patty instantly cuts over top of him while Davis and Marco flip on the weak side. As Sean Elliott pointed out on the Spurs broadcast, their movement causes Kris Middleton and Snell to run into each other, leaving Davis open at the top of the key. Patty gets him the ball and he knocks down the long three.

Midway through the 3rd quarter, DeMar and Dante Cunningham set up for it again in the exact same spot.

Like on his dunk one quarter later, DeMar rejects the screen and drives baseline. LaMarcus has been hanging out on the opposite block, though, so Thon Maker is in excellent position to help on DeMar’s drive. This is intentional. LaMarcus sneaks out to set a screen for Davis, likely intended to be a back pick designed to get Davis open in the corner on a Hammer action.

Middleton feels it coming and shifts towards the corner to deny the screen, so LaMarcus adjusts his angle. Davis makes the exact same read and dives for the basket. Nobody else on the court realizes what has happened until DeMar slips the one-handed bounce pass just past Maker’s reach and Davis makes the easy layup.

A few minutes later, DeMar and Jakob ran it back, this time with DeMar coming to the middle of the floor.

As DeMar comes over the screen, Maker does a good job of covering as much space as possible, and cuts off DeMar’s initial progress. But he has to recover to Jakob, and that leaves DeMar an open look from 14 feet. He misses, but when you don’t box out Jakob on the offensive glass, you don’t get the rebound. Jakob goes back up with the ball and draws the foul, and since Bledsoe very clearly didn’t like the call, the Spurs got to shoot an extra free throw after this play as well. Though DeMar missed the technical, Jakob tied the game up by hitting both of his.

The Spurs got a little creative with this concept, too. At the end of the 1st quarter, Derrick White and Jakob ran what looked like a normal pick and roll on the left side of the floor with Marco Belinelli filling the strong side corner.

Just as Derrick initiates, Marco cuts up from the corner to the wing. Snell has to follow, producing essentially the same effect as running the set with an empty corner without giving the defense a chance to prepare for the action.

If Snell helps off Marco to tag Jakob, Derrick will kick it out to Marco on the wing for an open three. He doesn’t, so Derrick throws a perfect pocket pass, and with no help, Lopez is unable to recover to Jakob in time. Jakob makes the layup while drawing the foul then knocks down the free throw for a three point play.

It will be interesting to see how the Spurs usage of this play evolves, and when and how teams begin to counter it more consistently. For now, though, it’s been one of their most successful actions.