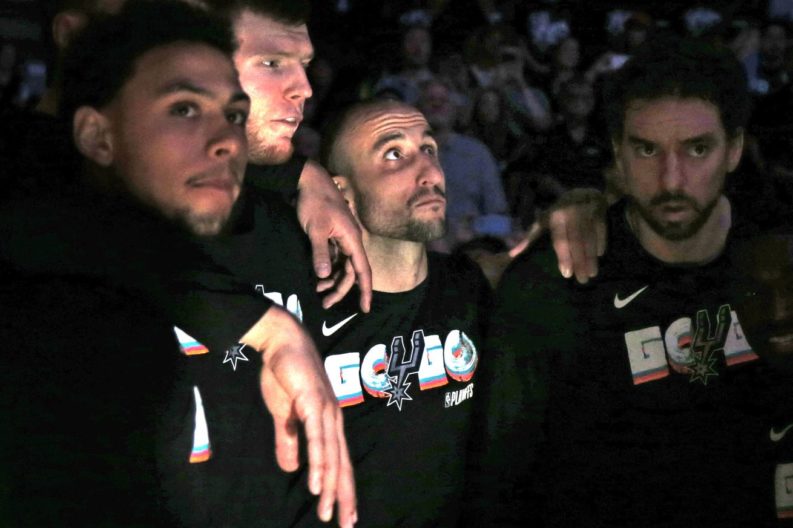 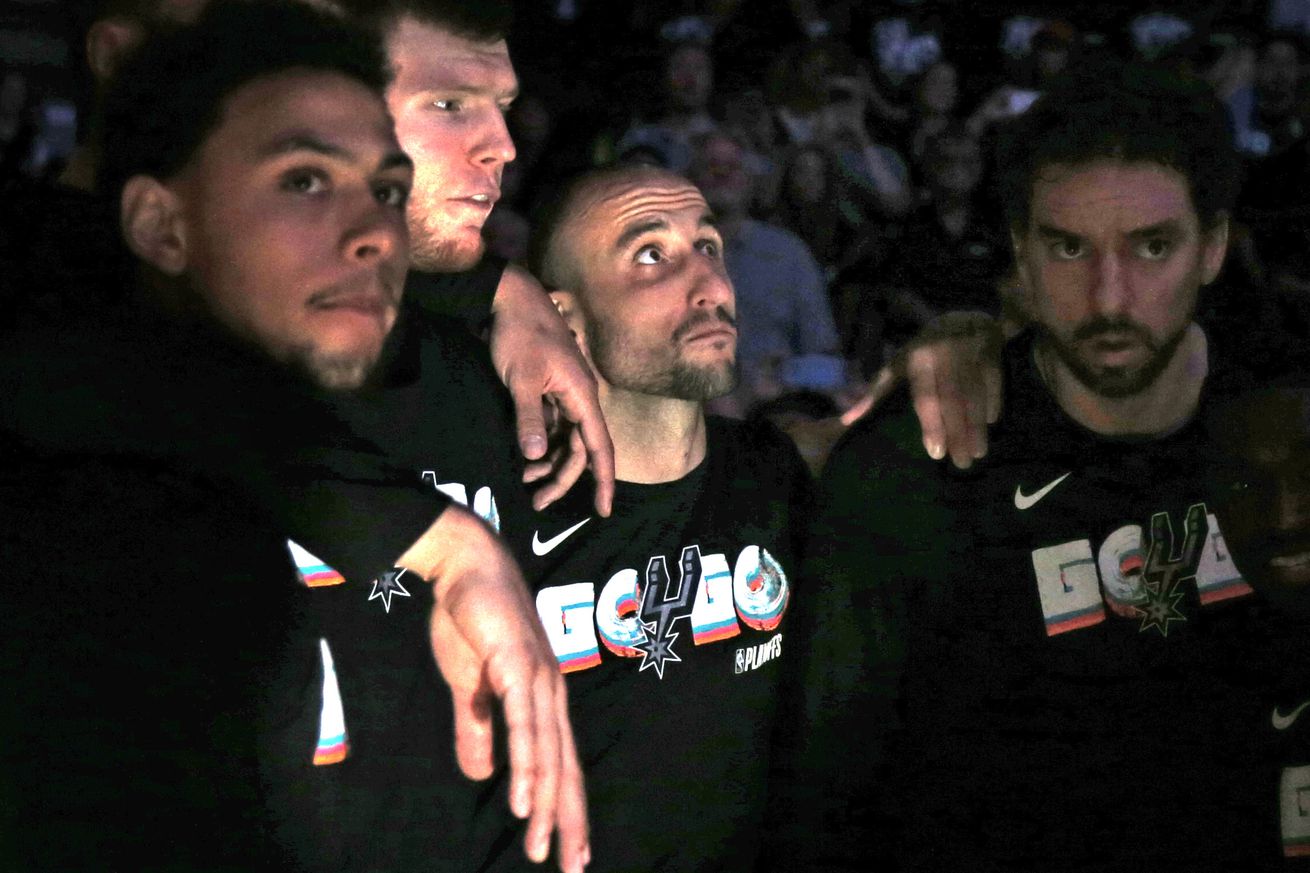 The summer of our discontent has officially come to end in South Texas. KL tied up his loose ends with a THANK YOU to the Spurs and their fans. Immediately thereafter, the NBA schedule was released and fans knew just when Toronto would be visiting the Alamo City.

This week on In The Bonus, PtR contributors Bruno Passos, Marilyn Dubinski, Mark Barrington, Jesus Gomez, and Jeph Duarte discuss what to think of Kawhi’s “goodbye”, the idea that the Spurs were overlooked when the season was being booked, and just exactly how this lineup might erupt as the season unfolds.

Kawhi Leonard published a letter in the Express News saying thank you to the Spurs and San Antonio. -What did you think of the gesture?

Bruno Passos: FUNNY YOU SHOULD ASK.

Marilyn Dubinski: I thought it was too little, too late to have a positive impact of any kind. Maybe it would been mildly accepted had it come out within 48 hours of the trade, or even better, if it actually answered some questions and gave us Leonard’s side of the story. Instead, what we got was something that frankly could have been copy/pasted from a “how to write a thank you note” tutorial, no guarantee that those are even Leonard’s words (signed with his brand logo — good touch, Uncle Dennis), and we’re left wondering how it took him three weeks to figure out how to say “THANK YOU” six times. He seriously needs a new PR team.

Mark Barrington: I thought it was rather weak, myself. I want to chalk it up to inadequate communication skills, but it doesn’t even read like he wrote it himself. It’s so generic and perfunctory it frankly felt like a poke in the eye more than gratitude. I feel petty for being so salty about someone saying THANK YOU (six times, in ALL CAPS), but the letter just didn’t seem sincere. I hope I get over this eventually, but I’m still mad at the guy.

Jesus Gomez: It was fine, I guess. I don’t mind that it wasn’t an elaborate letter, necessarily, but if it was going to be a simple “thank you” it would have had a bigger impact had it been released soon after the trade. Also, it would have been nice for Kawhi to take some responsibility for how things unfolded, but I’ll guess we’ll have to wait for that. It wasn’t a good letter, but I wasn’t expecting Leonard to open up on The Player’s Tribune like Tony Parker did.

Jeph Duarte: I honestly didn’t care by the time he chose to release his letter. Tony Parker’s letter was so eloquent and honest — showing how he really went through a lot making the decision to sign with another team. After that, it’s hard to put any stock in what he says when he clearly wanted out of town.

The schedule for next season has been released. Which are the three Spurs games you are most excited to watch?

Passos: It’s impossible to not say the Raptors’ visit in early January. Beyond that, probably the first game against LeBron’s Lakers and the last game of the season versus the Warriors, by which point DeMarcus Cousins should be healthy again, giving them five potential All-Stars to throw on the court at one time.

Dubinski: It’s hard to pick any particular game because they all ultimately count as one point towards one goal regardless of the opponent, but if I had to pick three I’d say the season opener against the T-Wolves (for obvious reasons), Dec. 13 vs. the Clippers because Boban! (corny, I know, but Spurs fans have yet to actually see him on the AT&T Center floor since he left), and DeMar DeRozan’s trip back to Toronto (the shoulder chip is real, y’all).

Barrington: I watch all of the games, and I really don’t get too excited about any of them, but if I had to pick, I’d go with both matchups against the Raptors and the finale against the Mavericks, where Manu and Dirk face off for one last time.

Gomez: I’m excited for the third game of the season against the Lakers. I want to see if they are on the same tier as the Spurs, as many claim. Kawhi’s return should be fun. Will fans boo him? Will the Spurs have a tribute video prepared for him? If DeRozan outplays him, the crowd will go crazy. Then I’ll take Feb. 9 game against the Jazz. It’s the first game after the trade deadline, and I have a feeling the Spurs might make a move in-season this year.

Duarte: I have to go start with at least one Houston game. My wife and I took my daughter last Easter and the Spurs won by 17, so I feel that is meant to be. I’m also excited to see Parker’s return to San Antonio. For a third, I’ll go with Utah. The Jazz seemed to pick apart the Spurs last season and I think a little redemption would be nice.

The Spurs won’t be featured on opening day or on Christmas and they have just 25 nationally (counting NBA TV) televised games. Is that fair, considering how last season went, or should they be getting more love, since they added DeMar DeRozan?

Passos: From an entertainment and novelty point of view, I don’t think next season’s Spurs register with the casual viewer as much as many of the other teams chosen, and that’s fine. A Raptors-Spurs game would’ve certainly been worthy of Christmas Day billing, though.

Dubinski: I think they’re getting overlooked, but I don’t mind in the slightest since it means the Spurs can only exceed expectations, they’ll be under the radar where they like to be, and I’ll take our good ol’ local broadcasters over ESPN, TNT and ABC every day of the week.

Barrington: Fair. Nothing much is expected of them, and from those who little is expected will come great things.

Gomez: It’s fair, because last season they were boring to watch and they’ll likely continue to be boring to watch for the casual fan. Hopefully they’ll be boring but good, in which case they might get flexed into another nationally-televised game or two during the regular seasons and will get a bunch more in the playoffs.

Duarte: Boring or not, the names on this line-up don’t scream nationally televised game. The Spurs lost Kawhi Leonard, Danny Green, and Tony Parker —arguably three of the most popular and visible players (outside of Manu, of course). Even our stars don’t move the celebrity meter; LaMarcus Rudy, and Demar are soft-spoken guys. Dejounte, Derrick, and Lonnie have yet to show the league their full force. And then you’ve got new guys like Poeltl and Cunningham who many fans barely know. Doesn’t really make you think exciting basketball. Oh, but just wait until these guys unleash. The rest of the basketball world will be upset when they’re catching highlights on missed games.

The Spurs still have an open roster space and the biannual exception worth $3.4 million to fill it. Should they sign someone now or save the spot and money for the buyout market?

Passos: Unless they absolutely love what they see in someone like Chimezie Metu and want to lock him in for the long term at an affordable deal, it makes sense to move forward with flexibility.

Dubinski: I’d save it at this point and either see if someone shocks in training camp (personally, I’m rooting for Jaron Blossomgame), or leave it open in case a position of need or a surprising waiver that the Spurs could use comes about.

Barrington: I don’t know of anyone available that could make a difference, so I guess save it. It’s unlikely that the 15th player is going to see much court time, but they might need to sign someone if a rotation player misses time to injury.

Gomez: I’d say save the money. I don’t care much about the roster spot if it’s filled with a veteran (I like Metu and Blossomgame more on two-way deals) on a minimum contract that could easily be waived. The money is more important. Maybe by February the Nets waive DeMarre Carroll or the Suns waive Trevor Ariza. If the Spurs are in the playoff path, they could offer minutes and more than the minimum, making them players in the buyout market.

Duarte: Definitely hold the spot and see who might help the Spurs in a playoff run come nearer to the post-season.

What’s more likely to you at this point: Lonnie Walker getting an All-Rookie first team spot, Derrick White or Jakob Poeltl finishing top five in Most Improved Player, or both DeMar DeRozan and LaMarcus Aldridge getting All-Star nods?

Passos: It’s Option C, by a considerable margin for me. Walker plays at a loaded position and on a team that typically doesn’t feature rookies enough to get national attention. I like him in the long term, though. White and Poeltl should both get rotation minutes, but not likely enough to make waves.

Dubinski: For some reason the Spurs never get attention in the Most Improved category (even when it’s well deserved), so I’ll eliminate that. Now the challenge is deciding between if Lonnie will get enough minutes for All-Rookie consideration or if DeMar can crack the stacked West. While the latter seems more likely, I’m going to throw caution to the wind and say Lonnie proves to be too good for Austin, becomes the first rookie to crack Pop’s rotation early since Leonard, and does well enough to garner enough Rookie votes. Imagine the hype that will build…

Barrington: I’ll go with two of those: Lonnie Walker IV will be on the All-Rookie team and both LaMarcus and DeMar in the All Star Game.

Gomez: I don’t think Lonnie will get the minutes to make an All-Rookie team, unless something goes wrong. Poeltl and White are both young guys that are expected to get better, so I doubt they get the narrative push they’d need to win Most Improved. So I’m going with but DeMar and LaMarcus being All-Stars. It will be hard, though. The West is loaded with stars. But if the Spurs surprise as a team, maybe they’ll both get in.

Duarte: I don’t think any of the three is likely. I truly think the Spurs will fly completely under the radar this season. And for what it’s worth, if the post-season is all about the Warriors or LeBron or a dark horse making waves in the West, the Spurs will end the season under the radar. The point is, the Spurs always play the long game and I think this exact roster can wreak havoc in the near future. The accolades are meaningless.

If you have a question to pose to the round table, post it in the comments below.