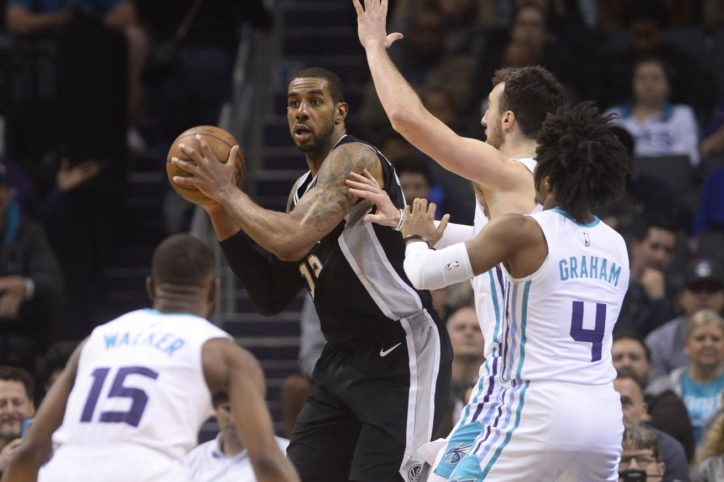 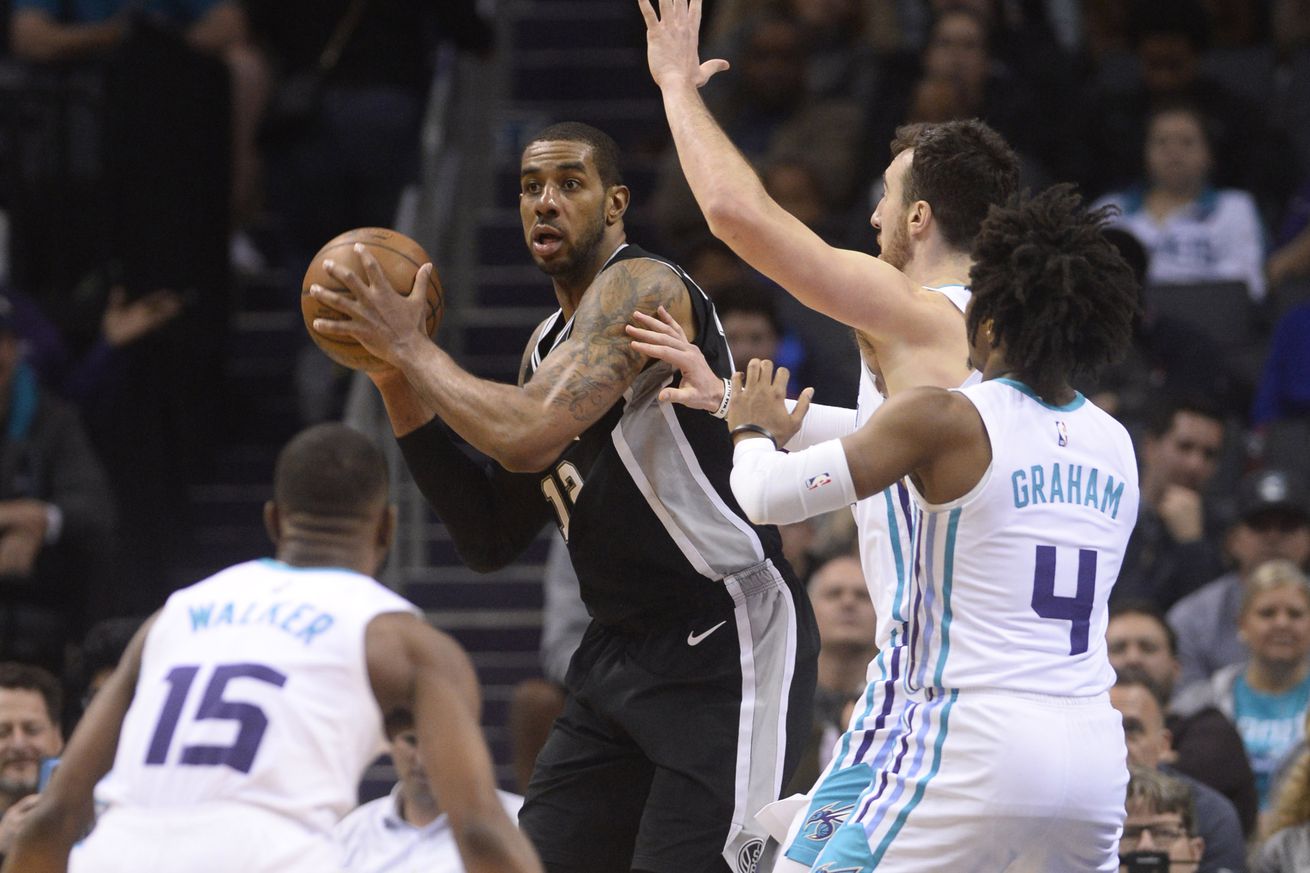 It doesn’t matter what defense the Spurs face if they can’t do one simple thing.

The Spurs’ greatest nemesis this season appeared to rare its ugly head again in their Tuesday night loss to the Hornets in Charlotte. Not score-first point guards, though Kemba Walker did notch 38 points, nor poor outside shooting, though the Spurs’ 8/28 on above-the-break threes was a problem. No, it was a zone defense that helped to lead to the Spurs’ 3rd loss in the last 4 games.

The Spurs’ apparent inadequacy when facing a defense that can rarely survive any sustained exposure to NBA-level players has been a frustrating footnote to an otherwise surprisingly successful season. What makes it all the more frustrating is that their opponents almost never experience the same rhythm shattering frustrations when the Spurs slip into their version of the zone.

Here are the Hornets quickly and easily scoring against the Spurs’ zone on the three possessions they ran it in the first half.

The Hornets got right into the heart of the Spurs’ zone with little effort, putting up 7 points on those 3 possessions.

For their part, the Spurs did just fine when the Hornets went away from man-to-man defense initially.

Derrick White drives and kicks it out to Marco Belinelli on the right wing. Marco swings it to Rudy Gay as he backs into the corner for the wide open three. This is obviously broken coverage, and while its unclear who Kemba Walker is talking to when he’s pointing to the corner, it’s clear someone was supposed to rotate over when Dwayne Bacon had to step up to pick up Marco.

Unfortunately, the Spurs would score just 2 more points against the zone the rest of the game, though they generated several good looks.

It’s important to differentiate between the Hornets’ zone press and their half-court zone defense. They used a recognizable zone in the half court just 7 times, holding the Spurs to 5 points on those possessions, while they employed the zone press much more frequently, before usually dropping into a man-to-man scheme once the Spurs crossed half court.

Looking through the Spurs’ offensive possessions against that zone in the 2nd half, it’s easy to see how uncomfortable they appear.

On the first play, which resulted in a turnover and a run-out dunk, once Rudy gets in the paint, he should shoot, make the easy pass over the top to LaMarcus Aldridge, or lead Marco to the corner with a slightly more difficult bounce pass. Instead, he tries to toss it back out to DeMar DeRozan and the ball is picked off.

On the second play, the Spurs generated a good look, with Marco taking a three from the right wing. Though the possession ended in a shot clock violation, that was after the Spurs got an offensive rebound and the Hornets, like most teams, switched back to man-to-man for the rest of the play.

Rudy knocked down a pull up jumper from the right baseline on the third play, then took turns with Patty Mills missing good looks from three on their last 3 possessions against the zone.

Although they didn’t score well against the zone, this at least is encouraging. The Spurs’ previous struggles against zone defenses have been marked by possession after possession of purposeless passing around the perimeter, contested threes and countless turnovers. Aside from 1 bad pass from Rudy, that wasn’t the case in this game.

Instead, they missed makeable shots. While that’s one of the ways good zones can be effective — forcing good shooters out of their comfort zones — in this case, it appears to have less to do with the Hornets’ defense and more to do with a larger issue plaguing the Spurs. The Spurs’ continuous inability to score from deep makes them especially vulnerable. Bryn Forbes and Marco made 9 of their 18 three point attempts, while the rest of the team combined to shoot just 4 of 21.

The Spurs’ offense has excelled this year by using high value scoring opportunities like a scalpel, converting at the rim and beyond the arc as well as any team in the league. But that hasn’t been the case over the last month of basketball. While they continue to shoot well close to the basket, the Spurs are 18th in the league in three point accuracy since the All-Star break.

If that doesn’t change soon, it won’t matter what kind of defense they face.