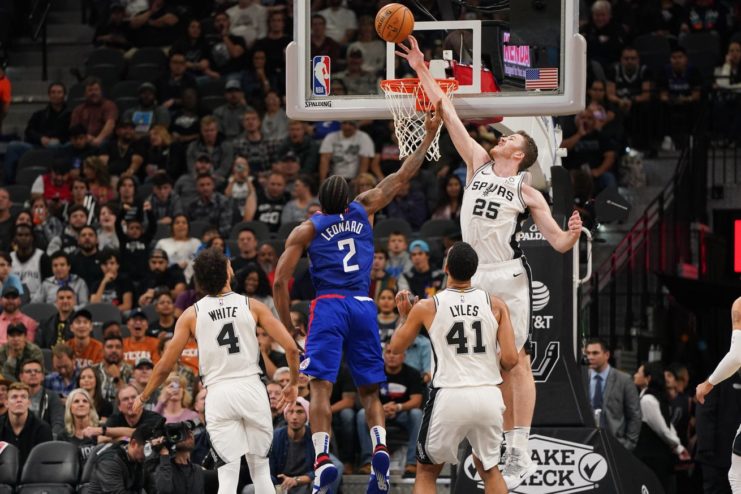 Though there has been plenty of ‘O’ for San Antonio this year, the defense showed up just in time for the holidays.

On a night where San Antonio transported us to the mid-2000s with peak defensive effort and timely shooting, their effort and execution netted them their most important and complete win of the year so far. Let’s be grateful for these positives from tonight’s win:

The most impactful players with the letter ‘K’ in their names were Jakob Poeltl and Derrick White (and not Kawhi Leonard). Poeltl in particular asserted himself in the paint in a manner that kept Ivica Zubac off the court and rendered Montrezl Harrell’s usual contributions moot. The “walking rejection” blocked four shots, including this momentum shifter in the fourth:

Jakob Poeltl going to work in the paint. pic.twitter.com/BHa8czpIJI

So this is his new career path, right?

His counterpart, White, went 5-for-7 from distance and looked confident in doing so despite seemingly tweaking his ankle in the early second half.

DeMar DeRozan with the strip starts the fast break as Derrick White finishes with the three! pic.twitter.com/e5obUYFYoO

DeMar DeRozan hit his first 3-pointer of the season and how beautiful it looked:

DeMar DeRozan knocks down his first 3 of the season
Spurs are ROLLING pic.twitter.com/1O7i7ieri0

It was also encouraging to see LaMarcus Aldridge chip in four blocks of his own to counter an off-night shooting:

That’s an @aldridge_12 BLOCK on @MONSTATREZZ!

Trey Lyles seems to be getting more used to coming off the bench, especially on catch-and-shoots:

Lyles also ran the floor well and played one of his better two-way games this season:

San Antonio also held its first opponent in this young season to under 100 points. Lastly, for those of us who have forgotten what it’s like to win consistently at home, Jordan Howenstine reminded us just how successful the franchise has been in the barn:

In fact, let’s just see the whole game’s worth of highlights:

Despite 13 losses in their 15 games, the Spurs still sit less than a handful of games out of the eighth spot with three quarters of the season left to play. Let’s see if they can take this momentum into Detroit on Sunday.