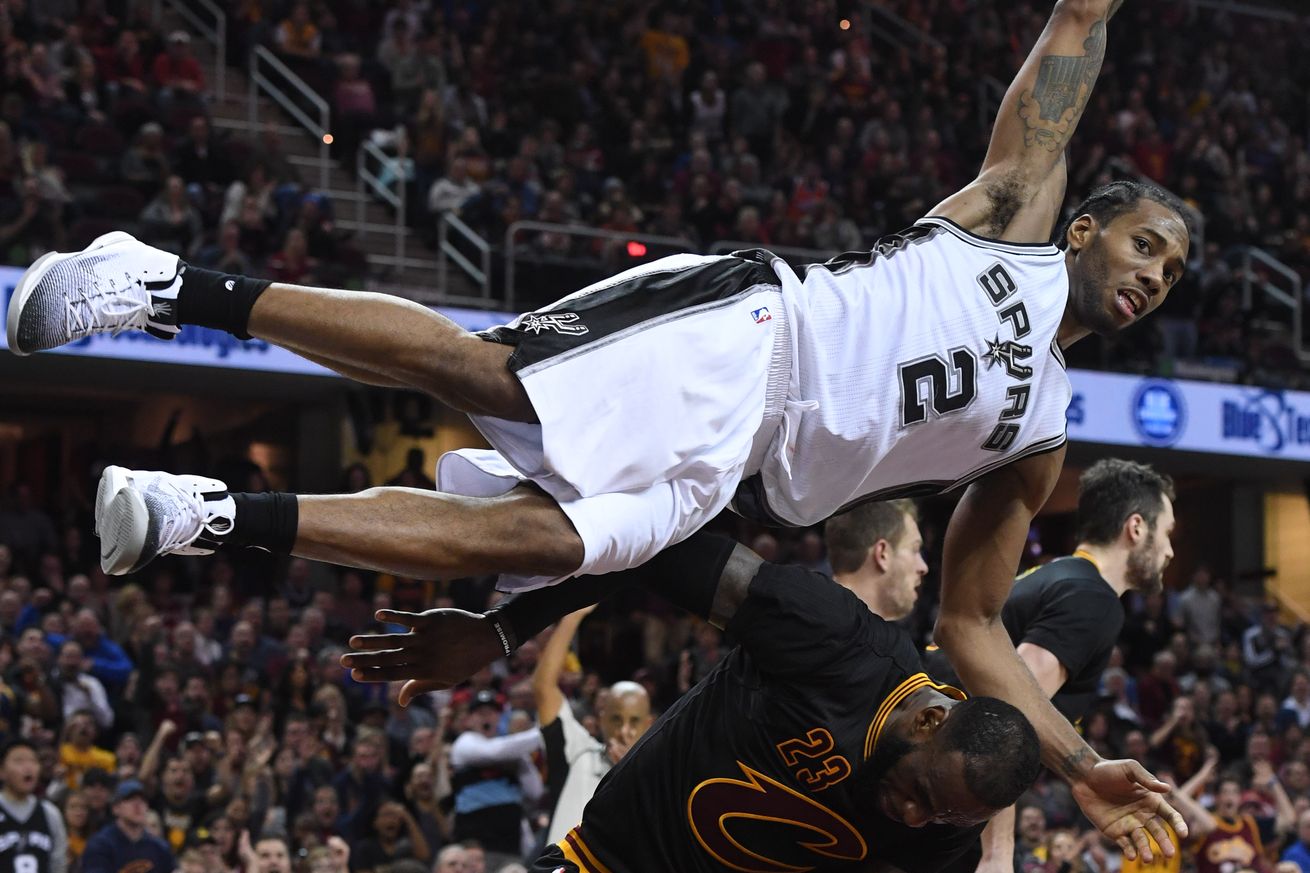 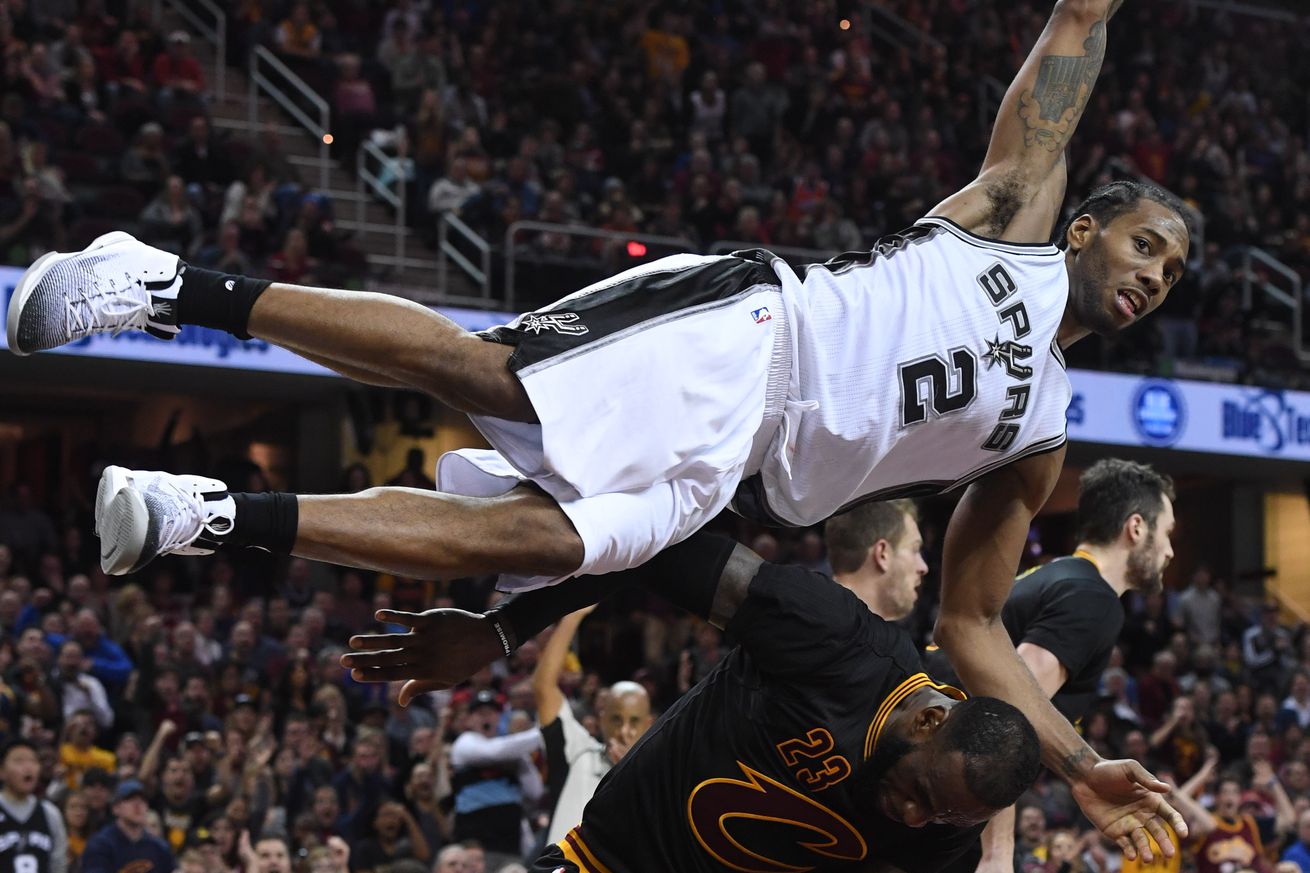 After their win in Cleveland, it’s time to take a look at the Spurs’ place in today’s NBA landscape.

Cleveland Cavaliers forward LeBron James may or may not be King of the NBA, but after six consecutive trips to the NBA Finals, he is certainly the King of the Eastern Conference. Whether this is seen as a function of his greatness alone or a consequence of the East’s prolonged mediocrity offering him little resistance is sure to be a fascinating argument for decades to come. What if he were in the Western Conference? Or what if today’s West, like in the 80s, consisted of a single power standing atop lesser challengers? What if that single power was the team which beat LeBron’s Cavaliers on their home floor Saturday night, the team that has proven to be his greatest Finals adversary throughout his career?

In an alternate Man in the High Castle-style reality, where the Spurs are waiting for LeBron in each of the last six Finals, it’s easy to imagine their 118-115 overtime win at the Q serving as a Game 1-7 tilt in any one of those series. In fact, were it not for a certain Game 6, Saturday night’s game (the Spurs 34th win of this season) could probably serve as a sample game or Exhibit A for a future Hall of Fame display celebrating the greatest Championship Rivalry in Sports. It’s easy to imagine the all-time series of Finals wins knotted at 3-all, which in our reality reflects the number of titles LeBron actually has. The Spurs’ 2007 Finals victory might be seen as an outlier, representative of the rivalry’s nascent stage, when the Spurs were more concerned about surviving the crucible of the West than they were about their Finals opponent from the East, and the second best Cavalier was a bald guy named Zydrunas.

In our alternate reality, each of the past six NBA seasons has served as a warm-up to the inevitable Spurs vs. LeBron Showdown. Conversations about Championship contenders would begin and end in San Antonio or Miami/Cleveland. The other 28 teams would be presumed non-viable upstarts by the national media, with injuries to key players on the two elite teams being the only narrow window through which an interloper might penetrate.

All of this dovetails nicely with present circumstances, since this year’s NBA season is being promoted as a two-horse race towards an inevitable Finals trilogy between Cleveland and Golden State. The Spurs, while respected by the league and its writers, are largely seen as a team whose time in the sun has passed with the retirement of Tim Duncan. As Matt Moore of CBS writes, while the Spurs have the league’s best coach in Gregg Popovich and a bonafide superstar in Kawhi Leonard, the team’s failure to get past very beatable opponents in the last two postseasons makes it unlikely that they’ll be able to get past a presumed-to-be-unbeatable opponent in Golden State.

From the Spurs’ perspective, this is somewhat reminiscent of the state of things when they first beat LeBron in 2007. Ten years ago, when the Big 3 were all in their primes, the NBA was never seen as a two-horse race between the Spurs and an Eastern Conference opponent. In fact, in a West which included the 67 win Dallas Mavericks and the 7 Seconds or Less Phoenix Suns, the Spurs were lucky to not be written off as the third best team in the Conference. Back then, it was said SA couldn’t get by Dallas because the Mavs had too many versatile athletes like Josh Howard and Devin Harris, and that San Antonio had only defeated the Suns two years prior because Joe Johnson broke his face (of course, the Spurs then “bodychecked” their way through Steve Nash and the Suns in the Western Semifinals, which inspired a fresh round of second guessing. I’ll be forever grateful Tim Duncan’s last title was not 2007, for while many objective measures show it to be the best of the Spurs’ title teams to that point, to many in the NBA world it was purchased with blood and therefore tainted.) In other words, even at the height of the Spurs ‘00 run, they were never viewed a sure thing the way Golden State is now.

So we’ve ventured through the past and through an alternate present. What’s the takeaway for today? Will the Spurs overcome their detractors to win another unexpected title like they did in ‘07, or will it be another 60+ win season and a second round playoff exit? Maybe you’re like me and you’ve been avoiding the sacrilegious thought that the Spurs aren’t actually good enough to win a championship this year. Or maybe you’ve embraced it, as I’ve tried to do since training camp opened with so many new faces. The Tim Duncan Spurs won five championships, but there were also fourteen years when they had championship aspirations and fell short. There was never a time in Timmy’s career when the Spurs weren’t at least one of a handful of title contenders. Now that we’ve officially left the Big 3 Era for the Kawhi-nasty, the championship expectations have abated somewhat, thanks to the Warriors’ ascension and the lingering doubts about Leonard’s ability to put a team over the top as its unquestioned leader. But the questions are there in part because expectations remain.

In this context, the overtime win in Cleveland was simultaneously illuminating and irrelevant. Sure the Spurs gutted out a nice win in a hostile environment while being without veteran starters Tony Parker and Pau Gasol, but with so many young players like Dejounte Murray, Davis Bertans, and Kyle Anderson thrust into rotation roles, the Cavs had plenty of open corner threes which simply didn’t go down. Leonard had a career high 41 points, but his five misses late in the fourth quarter also helped the Cavs overcome a 9 point deficit to send the game to overtime. The Spurs’ other signature road wins this season against Oakland, Houston, Milwaukee and Boston can be viewed with similar pinches of salt. A 30 point drubbing of the Dubs on opening night is cathartic, but what relevance does it have to a Game 7 in May?

Besides, even if the Spurs got a spark in Cleveland in part because Pop had the guts to start Murray (who had 14 points on 7-9 shooting with 6 assists) over veteran Patty Mills (who played in crunchtime and hit a Ray Allen-esque three pointer late in OT), won’t he just go right back to the well with defensive sieves Parker and Gasol come playoff time? (Moore predicts Pop will have “too much respect” for Tony and Pau to reduce their minutes or bump them from the starting lineup in the playoffs – which I guess means Pop didn’t respect Manu when he asked him to come off the bench in the 2005 playoffs.)

If it’s their fate to lose in the playoffs this year, the Spurs have at least shown us that they possess the weapons to fight until the end. This is not a team that’s going to be overwhelmed athletically, as last year’s Spurs were. With Timmy gone, my hope – if not expectation – was that Pop would find a way to shore up the defense while crafting a pretty good offense out of Leonard isos and PnR with Tony and Gasol and LaMarcus Aldridge’s 1000-thread-count-smooth jumpers. The biggest concerns would then be the bench rebuilding project, rebounding, and whether Kawhi could make that final leap into the stratosphere. Well, it’s January and the Spurs are Top 5 in both offense and defense (an informal metric for gauging a team’s title-readiness), they just turned 10 offensive boards into 15 points against Cleveland (though they still rank in the league’s bottom third in overall rebounding), and their bench is arguably the best in the league with Patty, Jonathon Simmons, Bertans and Dewayne Dedmon all playing their roles beautifully (even the forgotten Anderson had a great game Saturday.) In Murray, the Spurs have a fearless backup to Parker who replicates almost all of Tony’s floater game, and he’s three inches taller which significantly raises his defensive ceiling above those of Parker and Mills.

All that remains is that tricky question about Kawhi in the clutch. If the Spurs do finally meet the Warriors in the playoffs, I’m perfectly willing to be honest about what I expect to happen. After all, two superstars versus one isn’t much of a fair fight, and while Curry and Durant carry their own late-game baggage, they’re also backed up by two other borderline superstars. We’ve seen the kind of superhuman effort it takes to beat this team, and while Kawhi certainly has it in him to replicate LeBron’s takeover of last season’s Finals, nothing he’s done in the Spurs past two playoff defeats indicates he’s up to the challenge yet.

So we’ve got a Spurs team that’s on pace for 64 wins with an outside shot to reach the Finals. Welcome to today’s NBA. But I also think back to a time in 2013 when the Warriors were a fledgling group of youngsters. Back then, Steph Curry and Klay Thompson were almost as famous for being the sons of great NBA players as they were for their own accomplishments. Draymond Green was just a hothead from Michigan State instead of a hothead from Michigan State with a championship ring. That 2013 team lost a six game Semifinals series to a Finals-bound Spurs team. Though the Spurs certainly weren’t unbeatable that season, they were looked at as a major roadblock to a Golden State team trying to get into the Championship conversation.

If the Warriors finally return the favor this year, it won’t be a case of unfulfilled expectations for the Spurs. The reality is that this core is just forming; they’re too young to carry those expectations. Sure they’re good enough to beat Cleveland in OT on the road during the regular season without two veterans, because they play as a team and have a two-way superstar forward who can get a shot off from anywhere. But the Next Great Spurs Team, whatever form it ultimately winds up taking, hasn’t gotten all of its big game reps in yet. It’s okay to say “wait til next year,” because with Murray, Bertans, and Dedmon as 20-somethings in the fold with the 25-year old Leonard, the Spurs have a chance to own the future just as they once owned the past. It will take some luck, just as it did for the Warriors and the Cavs.

And if the Spurs do somehow make it to the Finals this season? Then Saturday night’s game at the Q might just be a sneak preview of the latest installment of LeBron vs. the Spurs.