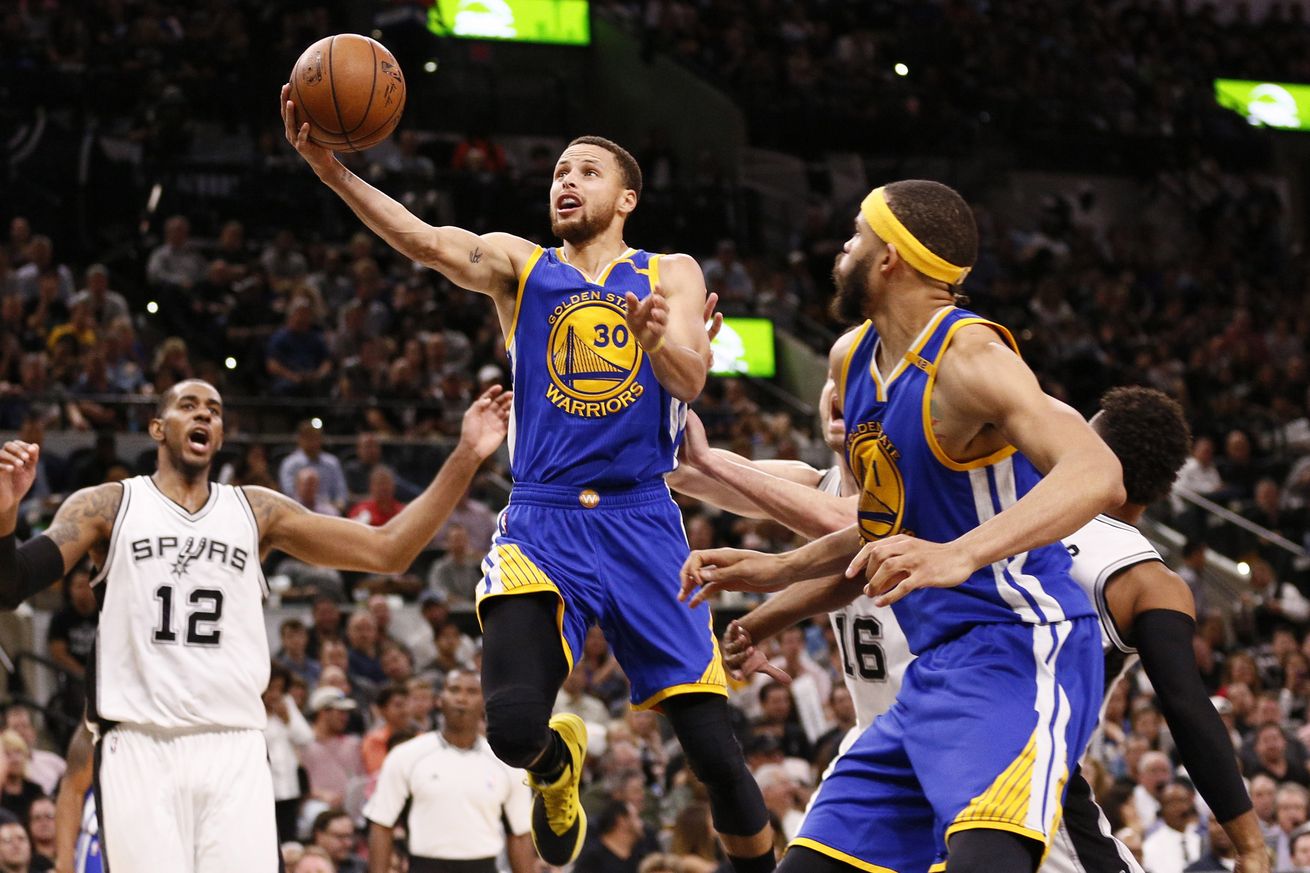 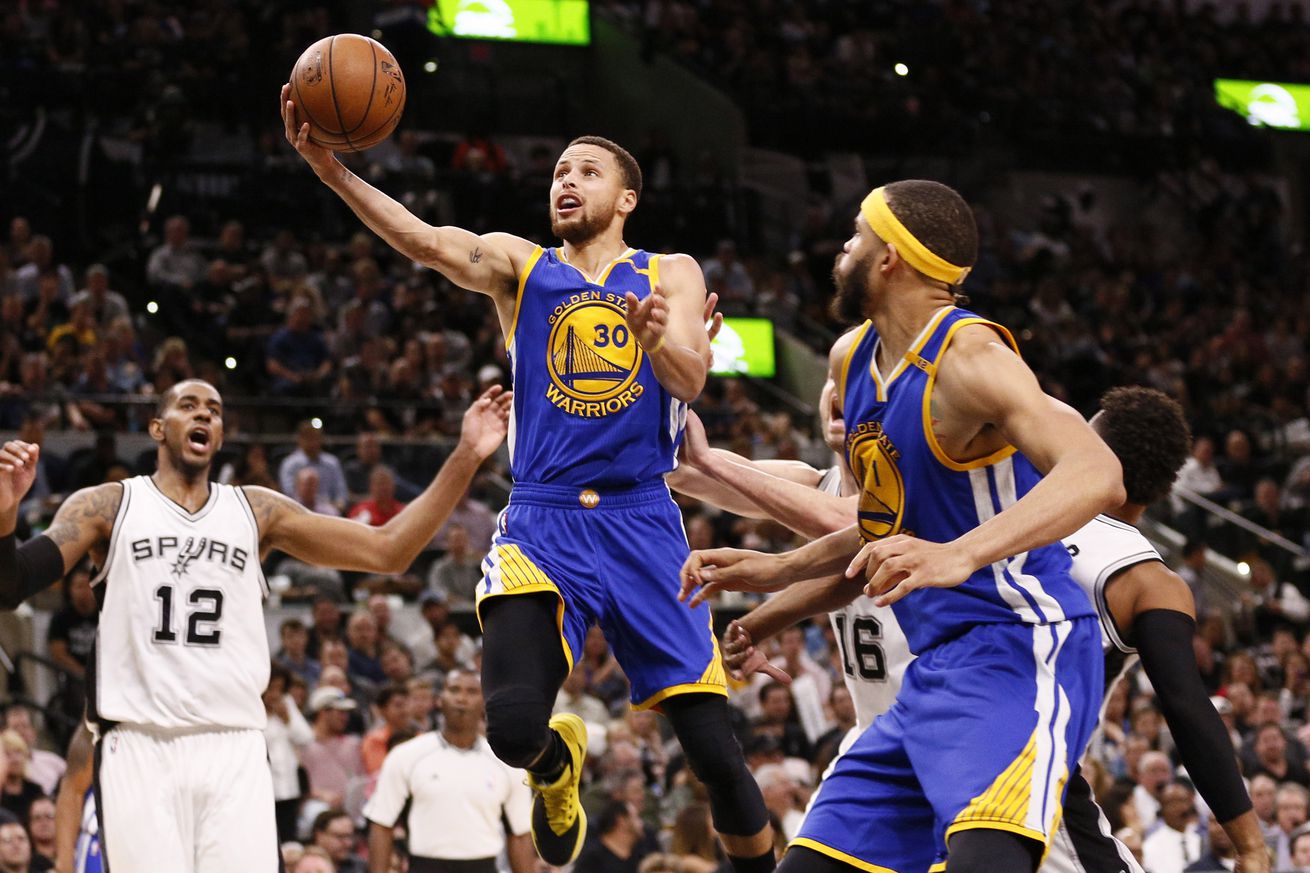 The most prominent difference between the Spurs blowout win early in the season, and the W’s win this past week, is how big San Antonio played.

The Spurs got off to a 25-3 start against the Warriors Wednesday night and then things went sub-optimally from there. It’s tough to know what to make of the match-up. The teams have played three times on the season and not once have either had their full rotations available. The Dubs were missing Kevin Durant in this last game of course, and they sat nearly everyone of consequence in the meeting before that (while the Spurs were without Kawhi Leonard, LaMarcus Aldridge and Tony Parker), but even in the season-opening blowout win at Oracle Arena, the Spurs were without Danny Green. And how much can you take away from the first game, which was before Durant got used to playing with his new teammates and vice versa?

Green’s absence was one of several differences between the season-opener and this loss. Gasol and Dewayne Dedmon have flipped roles, where now the former comes off the bench and the latter starts. Also, Jonathon Simmons, who had a career-high 20 in that first game is currently in the dog house and didn’t play until garbage time on Wednesday.

There was one other subtle change that I think has been largely overlooked. The Spurs played small-ball for all of 40 seconds on Wednesday, but played 11 minutes worth of it in that blowout win —including the last nine competitive minutes of the game— and that’s just in the 44 minutes I counted before both coaches emptied their benches.

If you’ve been paying attention, you’ve noticed that the Spurs have played very little small-ball this season, especially if you consider Davis Bertans a “big” and thus exempt from the conversation. Mainly I’m talking about Leonard at the four, which you may recall most assumed would be his position in the pros since he didn’t have much of a handle or a jumper at San Diego State. Gregg Popovich hasn’t done much of it over the years, and the results have been mixed when he has.

But this season, on the occasions when Pop has gone to it, small-ball has been tremendously successful.

Using NBAWowy!, I looked at all the Spurs lineups featuring Leonard and LaMarcus Aldridge but without Gasol, Dedmon, Bertans, David Lee and Joel Anthony.

There was some debris in those numbers, to be sure. The five minutes worth of lineups featuring Nicolas Laprovittola are no longer useful for our purposes, and I had the hunch that Parker was dragging the numbers down a bit, too. So I put them in the “off” pile, along with all those bigs.

Now we get 62 minutes of Leonard/Aldridge goodness at the four and the five, respectively, and it was good for a 128.9 offensive rating and a 96.3 defensive rating, a 32.6 net.

Oh my. /fans self

Let’s replace Aldridge with Lee, who had the next most minutes as the sole big working alongside Leonard, with 34. Having a 6’8 guy as the biggest dude on the floor doesn’t seem like the best idea, conceptually, and even worse when he’s got the defensive reputation that Lee’s got. But in lineups with Leonard and without Aldridge, Gasol, Dedmon, Bertans, Anthony and Laprovittola, the Spurs have had a 131.9 offensive rating and a 88.4 defensive rating, a 43.5 net.

You didn’t see that coming, right?

(Of note, Parker was on the floor for just two of those 34 minutes.)

Next on the list is Gasol, who had 21 minutes with Leonard but not Aldridge, Dedmon, Bertans, Anthony and Laprovittola. They managed to scrape together a 130.8 offensive rating and a 100.0 defensive rating, for a 30.8 net.

Ironically the one small-ball lineup that didn’t work (though Popovich barely experimented with it) was the one with Dedmon, with a 90.5 offensive rating and a 104.8 defensive rating in all of 12 minutes, a -14.3 net. Maybe it makes sense, because Dedmon is the least offensively skilled of the bigs. Maybe it had something to do with Manu Ginobili only playing three of those minutes. Or maybe it’s just 12 freakin’ minutes out of 3,572 and it means absolutely nothing.

If you’re interested, the full tinfoil hat C.I.A. Pop conspiracy theory goes something like this: Pop knows what kind of powderkeg he has at his disposal with the small-ball lineups but has purposefully not played them much so that opponents —especially the Warriors— can’t scout it or prepare for it. He saw Golden State beat Houston on Tuesday night, looked at the rest of their schedule and saw that they were unlikely to lose the rest of the way and that the Spurs wouldn’t be able to catch them even if they won the rest of their games, and quickly decided to hide the small-ball lineups and not go all-out until the playoffs. It’s also why he kept Simmons glued to the bench.

I don’t really believe Pop’s that convoluted. Simmons is not some secret weapon; he’s a highly inconsistent 10th-man who’s in the doghouse. And I could more easily imagine Pop practicing his answers to interview questions in the mirror, than I can picture him poring over the Warriors’ schedule. I don’t think he’s purposefully hidden the small-ball lineups and had those guys practicing in secret. He’s playing the guys and the combinations he believes are best. Occam’s razor is probably the correct play here: The simplest answer is usually the correct one.

But I do think the Spurs will have to tinker with their lineups quite a bit to have a puncher’s chance against the Warriors. Parker is simply unplayable against them, and has been increasingly against most quality opponents. It’s like playing 4-on-5. He doesn’t space the floor adequately in small-ball because he doesn’t have Mills’ shooting range or quick trigger. The Dubs dare him to beat them to the basket and he can’t, even after switches. They rotate and recover too quickly. There’s also no one for him to guard on the other end, now that Durant has replaced Harrison Barnes.

Gasol’s a trickier one. He can space the floor, shoot threes and gobble up offensive boards. But the Warriors either force switches to isolate him in space or Stephen Curry simply scoots past him on the pick-and-roll. Maybe Gasol can survive for a few spot minutes while Curry is on the bench, but I wouldn’t count on him having a heavy workload in that series if you want the Spurs to advance.

Finally, Simmons has to get back in Popovich’s good graces. Anderson can give solid minutes in certain match-ups against sluggish opponents, but the Warriors are too quick and too long for him and he can’t get to the rim against them or punish them on the break the way Simmons can. He’s also in that Gasol category where he might be able to play spot minutes in the match-up, if anything.

I’d like to see the rotation against Golden State should roughly go something like this: 42 minutes for Leonard, 38 for Aldridge, 34 for Mills, 32 for Green, 24 for Ginobili, 20 for Simmons, and then Gasol, Dedmon, Lee, Anderson, Bertans and Parker can split the other 50.

Will Pop see it this way? Almost assuredly not. Would it work if he did? Probably not anyway. GSW added Durant to a 73-win team, man. But I have little confidence in the Spurs hanging with the Warriors if they continue to stay big, and even less if Parker is prominently involved. Sometimes the numbers match the eyeball test and things are as obvious as they seem. Occam’s razor, again.