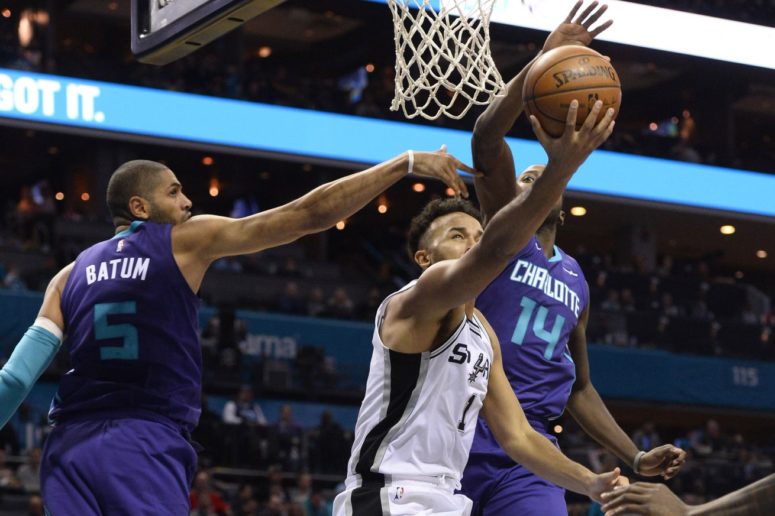 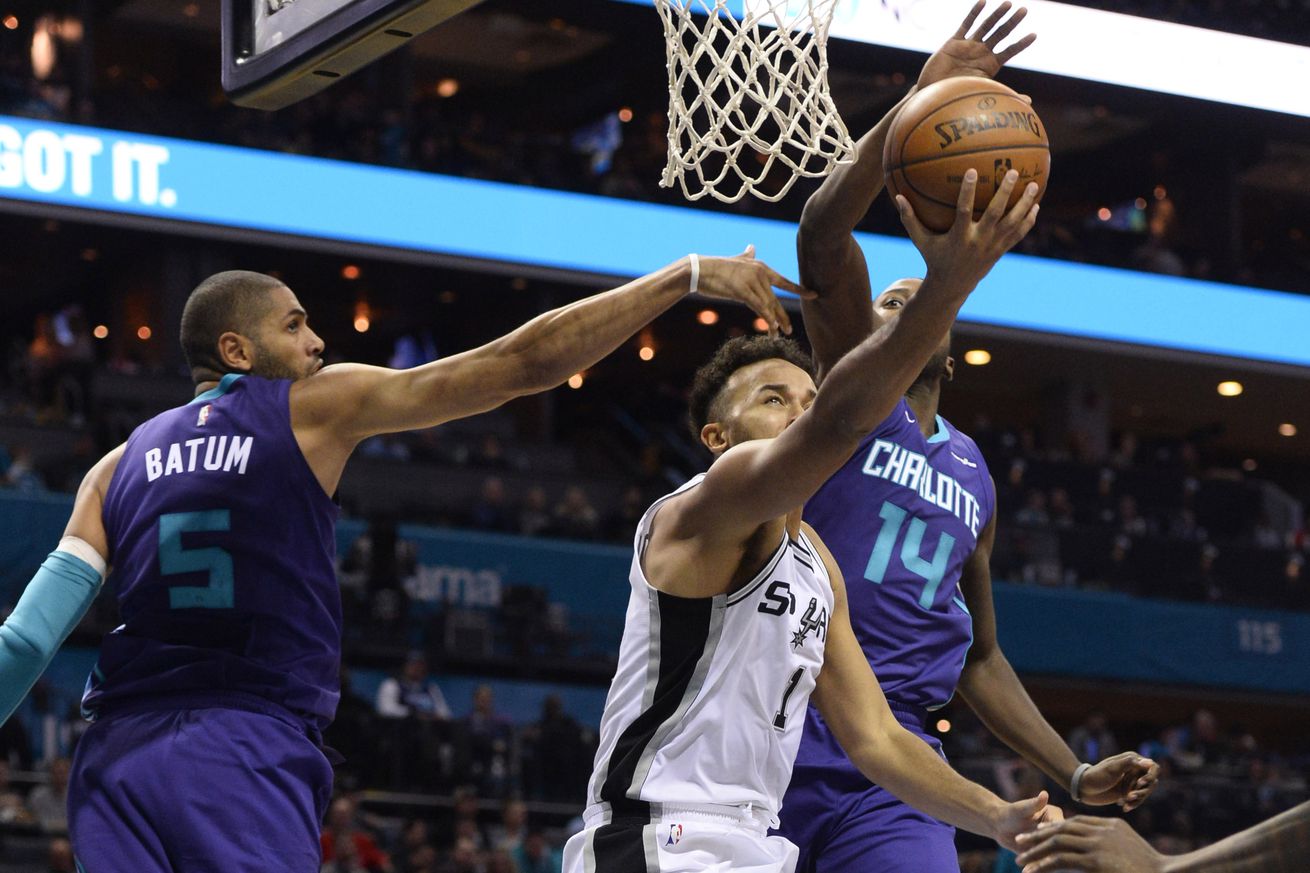 The least empty-calorie team in the league settled in after Thanksgiving.

With six minutes left to go in the second quarter, the Spurs were down two to the Hornets and appeared to have been soaked in tryptophan. Even worse, they had only scored 24 points in 18 minutes. But then, Dwight Howard shot two free throws.

Tim Duncan’s old friend had a chance to put the Hornets up four, but the career 56% free throw shooter missed the pair and the Spurs took the lead shortly after and never looked back. Ben Wiese has already provided a great recap of this game, so I am going to take this in the direction of Matt Bonner postgame evaluation: it took the Spurs getting through the first quarter to “get the Thanksgiving meal out of their system.”

In the summer of 2012 it looked like the Spurs had just blown their last chance at a title when they were backdoor swept in the Western Conference Finals by the Oklahoma City Thunder. The Miami Heat had seemed vulnerable, but to make matters worse, the Los Angeles Lakers had acquired Dwight Howard and paired him with Kobe Bryant, Steve Nash and Pau Gasol. Sports Illustrated had predicted “This is gonna be fun” (for LA) and miserable for everyone else as the Heat and Lakers would dominate the league for years. OKC’s dump of James Harden to Houston by seemed to roll out the carpet for the Lakers to stroll to The Finals. Sure, you can say you knew all along it wouldn’t work, but back then it was terrifying.

Fast forward to now, and the Dwight to LA move left the Lakers a smoldering pile of ash. Kobe Bryant and Steve Nash’s bodies broke down and SuperMan-Dwight has worn four costumes in five years. Howard’s mercurial nature has made him like a bizzaro-Midas to each franchise he touches. Every team to take a chance on him is left holding a basketball made of fool’s gold. Meanwhile, Pau Gasol is the only one from the Lakers (supposed) dynasty still flourishing.

Against his former teammate Saturday night, Pau outscored Dwight 17-10 and beat him to the rebound on several occasions. While the rest of the NBA tends to build teams around empty calorie guys, the Spurs take the veggies of the league. People who don’t look sexy on the court, or even appealing on paper at teims, but play their part and contribute value to a system. They’re the veggies — not necessairly what you want, but definitely what you need.

Nobody would have thought that Kyle Anderson, 40 year old Manu Ginobili or Pau Gasol would be vital contributors on a team that’s third in the Western Conference in 2017 and that’s because nobody thinks like the Spurs do. Where most teams and especially fans want the team that would best function on NBA2K by having the most players with the highest ratings, the Spurs are focused on the overall rating. The Spurs put together a Thanksgiving meal where the dishes complement one another, where teams like Charlotte (by adding someone like Howard) are bringing spaghetti to a party serving fajitas.

I will admit, I was pretty upset after the Pelicans game, especially after Pop’s admission that he’d never seen an “injury like Kawhi’s.” For the first time since the dark hours after Ray Allen’s shot, I logged onto the darkest corner of the Spurs-web, a Silver and Black centric message board that functions like a cross between Westworld and a Nuremberg rally. As you can imagine, it’s a pretty bleak place.

Theories were tossed about concerning Kawhi Leonard wanting to leave the Spurs and intentionally holding out because of our offseason. But most of all the commenters were lambasting PATFO’s building of the current team, their offseason, and the way they have wasted Kawhi Leonard’s prime. The heat of their rage was centered around the contracts given to Pau Gasol, Patty Mills, Aldridge and an offense that’s currently relying on Kyle Anderson.

This anti-PATFO line of the thinking from the dark corner of Spursweb shows how far removed R.C. Buford and Coach Pop are from the mindset of some basketball fans. If most fans ran teams, then an awful lot of teams would end up looking like the Kevin Garnett/Paul Pierce Brooklyn Nets. Empty calorie teams would reign. Shoot, the Warriors pre-Kevin Durant wouldn’t have ever seen the light of day if Warriors dark-webbers could’ve had their way and kept David Lee over Draymond Green, and traded Klay Thompson for Kevin Love.

The Spurs wanted to hit a grand slam in the off-season, they tried to land a number of guys and they didn’t get them. Instead of striking out, they went for the base hit. They ran back the core of the team that had a huge lead over the Warriors before their best player was Nancy Kerrigan’ed. Dark web thinking says blow it up. Thank God the Spurs didn’t.

In a single pep talk with LaMarcus Aldridge, they’ve delivered the top flight running mate Kawhi Leonard needs. They recognized the value Kyle Anderson possesses in just being himself, and that Pau Gasol’s IQ and skills as a post defender/stretch 5 threat warranted keeping him around. There are absolutely questions surrounding the team. Anyone who saw the lack of offensive output in the first quarter against Charlotte would have to concede that. But watch the rest of the game and it’s evident that what looks like the Spurs’ consistent defiance of what the average fan wants is, in fact, the best thing for this team.

If we were in charge, instead of Kyle Anderson filling in for an injured Kawhi Leonard, it’d be Allen Crabbe. Well, on Saturday night, Anderson ran the offense, shot 6-8 for 14 points, 5 steals and even threw in a Kawhi special.

Even if it isn’t always sexy, it’s what’s best for the fans too, because it wins. I always tell my boss that I will quit if the Spurs ever call me and ask me to be GM. Lucky for all of you, they haven’t called. Otherwise we’d have a big three of Derrick Rose, Joe Johnson and Dwight Howard right now and someone else would be benefiting from Anderson and Gasol’s nutritional value.

And so I leave you with a few great plays from the Veggie Crew:

This was a rad layup from Kyle Anderson in the 3Q vs Charlotte Saturday: pic.twitter.com/40SBVJcILJ

It’s plays like these that make me certain that JoLa is quality. pic.twitter.com/fTU32kHaIM

Forbes uncorks a world class fake pass to help clear the lane for this drive. pic.twitter.com/6YbsO2POSg

I ask you: does this look like the work of a 40-year-old man? #StillManu pic.twitter.com/zbsrAaHMTV

This is some pretty motion offense that ends in a sweet turnaround from Pau. pic.twitter.com/0JdPgsuRQ7