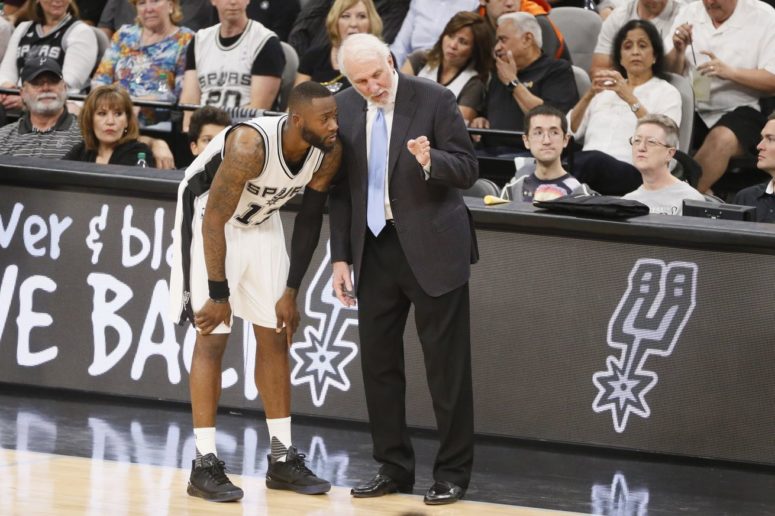 Other than re-signing Patty Mills, which has been deemed an important move by the Spurs on multiple fronts due to uncertainty and an otherwise lack of continuity at the PG position heading into next season, things have been pretty quiet in San Antonio during an otherwise frenetic free agency period for much of the NBA. Still that doesn’t mean the Spurs are done:

Checking in on the rookies

With the Utah Summer League in action, Spurs draft picks Derrick White and Jaron Blossomgame are working to earn some regular season minutes (or at least a roster spot for the latter).

A chat with JJ Reddick

Project Spurs’ Jeff Garcia caught up with former Clipper J.J. Reddick, now with the Philadelphia 76ers, at Steve Nash’s annual Soccer Showdown for a quick chat that included the Spurs’ postseason run, injuries, and more. I don’t know about you, but with all the talent joining the Western Conference this summer (not that it was low on it to begin with), I’m just glad at least one Spurs killer has moved east.

How about some real Grandpa Juice

Never let age define you. That is what the Spurs’ 1980 fourth-round draft pick, Calvin Roberts, believes. The 61-year-old grandfather who played his entire professional career overseas still aspires to fulfill his dream of playing in the NBA, and what better team to play for than the one that drafted you and a coach you can personally relate to? He looks pretty fit to me, and if Manu does retire, who’s a better to provide the Grandpa Juice?

Tell us how you really feel

This has been an odd summer so far for Spurs fans. Glory has rarely felt so close, yet so far away. Back-to-back 60 win seasons, the second without Tim Duncan for the first time in 20 years, making the Western Conference Finals, and being up 25 against Golden State in the second half of Game 1? Glory! Lose two key starters, including your MVP, to injury in the postseason and get swept by the Warriors? Not so glorious.

One thing is for certain: there is a wide variety of opinions of how successful last season really was and where the Spurs stand going forward as they appear to be standing pat while other teams in the west continue to shuffle in hopes matching talent with the Warriors. Some fans are okay with this (the so called “homers” who believe PATFO actually knows what it’s doing), while others aren’t so sure. Thanks to SAEN’s Jeff McDonald and Twitter, here are some of those grievances from the latter group:

Literally back-to-back in my replies. Spurs fans: Get together on your list of grievances and get back to me. pic.twitter.com/dgPmuS2Ag2

#1 on the List of Grievances is that Tim Duncan was allowed to retire last year.
#2 is that Boris Diaw is in the NBA and isn’t a Spur.

Both our bigs and guards are average so I see why this happens https://t.co/KSurnbQFR8

I definitely didn’t watch that team and go “Wow Kawhi has a lot of help from ___ consistently” https://t.co/SMHskDDVFW

Kawhi and Pop were great, the bench was great as a unit and the rest of the starters were great on defense and inconsistent on offense imo https://t.co/SMHskDDVFW

just scared the kawhi years will be barren

We won several championships with studs at the guard position in Manu and Parker. Our biggest flaw is not having a stud at guard now.

Especially when you’re currently in a time when the bar is as high as its ever been in NBA history.

I think displaced anger about Kawhi’s prime coinciding with the Warriors era of dominance leads fans to blame players and not the situation.

They’re frustrated as hell, can’t articulate the global why, and, boy howdy, it’s all LMAGREENPARKER’S FAULT.

We are in an era with the fear of one team dominating in ways not seen since Jordan’s Bulls is alive and well, and there are no signs that any of the Warriors’ stars are going to randomly retire or a take a year or two off to give the rest of the league a fighting chance. Still, #spurspoblems remains a thing, where issues that plague the minds of Spurs fans pale in comparison to the vast majority of other teams in the league.

Personally, I will still feel confident in the Spurs abilities nest season even if they roll back mostly the same team (which is looking more and more likely), and some better luck with health in postseason and a “contract year” performance from LaMarcus Aldrdige being enough to still seriously contend. Next summer when cap space opens up for the Spurs is when things will really matter, and until then a repeat of last season wouldn’t be the worst thing in the world considering the circumstances.