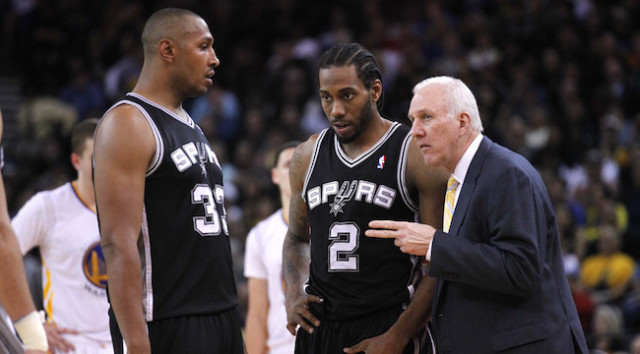 In their first 11 games after pulling off one of the most celebrated offseasons in recent NBA history, the San Antonio Spurs’ starting lineup looks like a gooey work in progress. In many ways, Tony Parker, Danny Green, Kawhi Leonard, LaMarcus Aldridge and Tim Duncan are a microcosm for the entire team: slow, antiquated, annoyingly patient and undeserving of a pinch of criticism until President’s Day, at the very least. In 166 minutes, they’ve operated at the slowest pace in the league and chosen the mid-range jumper over the three-point shot. They’re still swinging the ball around, cutting and screening like they always have, but, as Haralabos Voulgaris pointed out earlier this week on The Bill Simmons Podcast, the Spurs are zigging while the rest of the league zags—toiling away with conventional lineups and refusing to show their hand until games actually matter………Read More

Source: The Spurs Are Growing While The Rest Of The NBA Shrinks – RealGM Articles