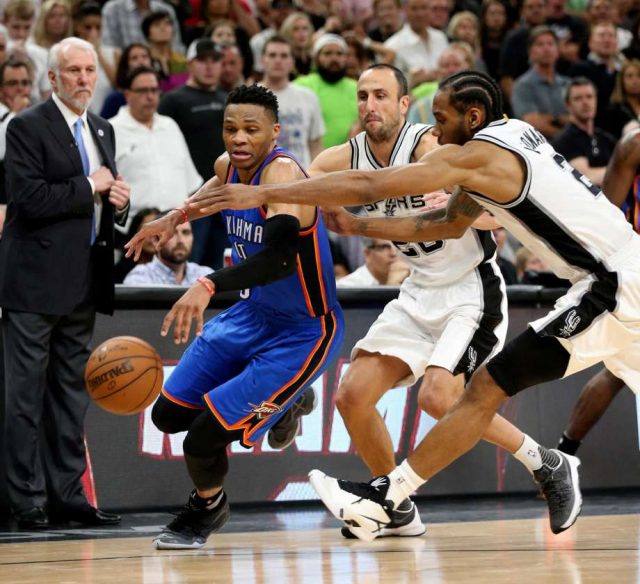 “Your pretty stunned when Jason (Phillips, the ref) doesn’t call that when Kawhi (Leonard) tries to foul (Russell Westbrook)?”

That’s what was asked of Gregg Popovich on the post-game podium, and his answer goes a long way towards explaining why we’re not going to pin too much of Game 5’s outcome on the refs, despite how obvious some missed calls looked on the television screen. (And, most especially, how they looked when slowed down in multiple angles and replays.)

“He fouled him,” Popovich answered. “It’s pretty obvious he fouled him. But, every call isn’t called. That’s the way the game is.”

He’s talking about the foul Kawhi Leonard tried to take on Russ with under 10 seconds to play and the Thunder up by three. And he’s right.

It was obvious Kawhi intentionally fouled Russ well before his shot, but Westbrook was still awarded the bucket and a foul on LaMarcus Aldridge and the Spurs got beat at home, 95-91. They now trail the Thunder, 3-2, in a series heading back to Oklahoma City for a Game 6 on Thursday that could be their last in a season cut excruciatingly short….Read More

Source: The Officiating Was Fishy As The Thunder Stunned The Spurs In Game 5