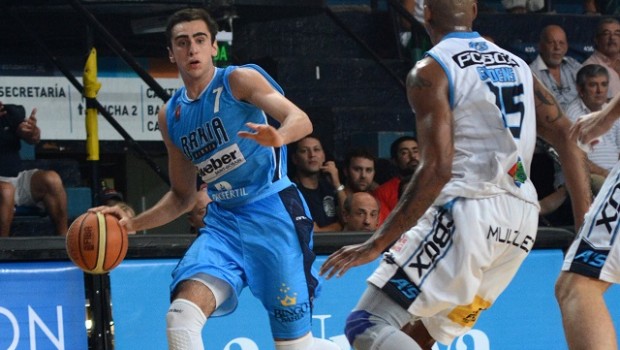 This years NBA draft hides a 19-year-old Argentine prospect by the name of Juan Pablo Vaulet not many people know about. Who is Juan Pablo Vaulet? He is a 6′ 6″ small froward from Bahia Basket of the Argentinian team, who is the youngest international player at just 19 years of age. Despite being a relatively unknown player, Juan Pablo Vaulet has kept his name in this years NBA draft. Why would an unknown International player keep his name in the NBA draft? The reason some NBA scouts are speculating is the 19-year-old Argentinian may have a promise from a NBA team to select him.  Why is Juan Pablo Vaulet so special? It just happens that he coached by none other than Sebastian Ginobili who is Manu Ginobili’s brother. Bahia Basket is also the Argentina team Manu Ginobili played on before he made his jump to Europe. Manu Ginobili knows who Juan Pablo Vaulet is as a player by proof of this Vine video he Tweeted earlier this year.

Juan Pablo Vaulet has promise but still needs alot of work as he is not a great shooter and lacks 3 point range. He is however an excellent rebounder and defender who likes to slash his way to the basket by using his athleticism. This 19-year-old Argentinian prospect is still a work in progress but the Spurs have been known to take chances on European players before, example Manu Ginobili. The rumor mill surrounding Juan Pablo Vaulet and the Spurs is just that speculation at this point. But with all the similarities to Manu Ginobili and the Spurs scouting the Argentine league instead of the European league is just too coincidental to ignore. The NBA draft is only two days away and we will know at that time if this is all just rumor or if this was the Spurs plan all along.