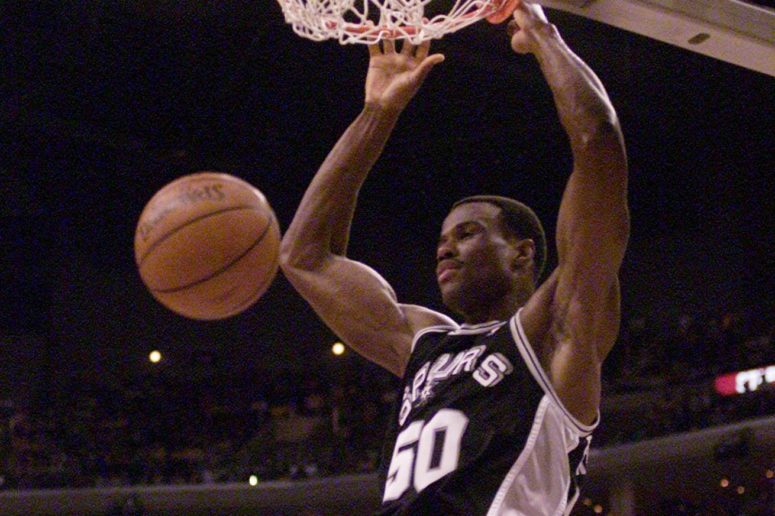 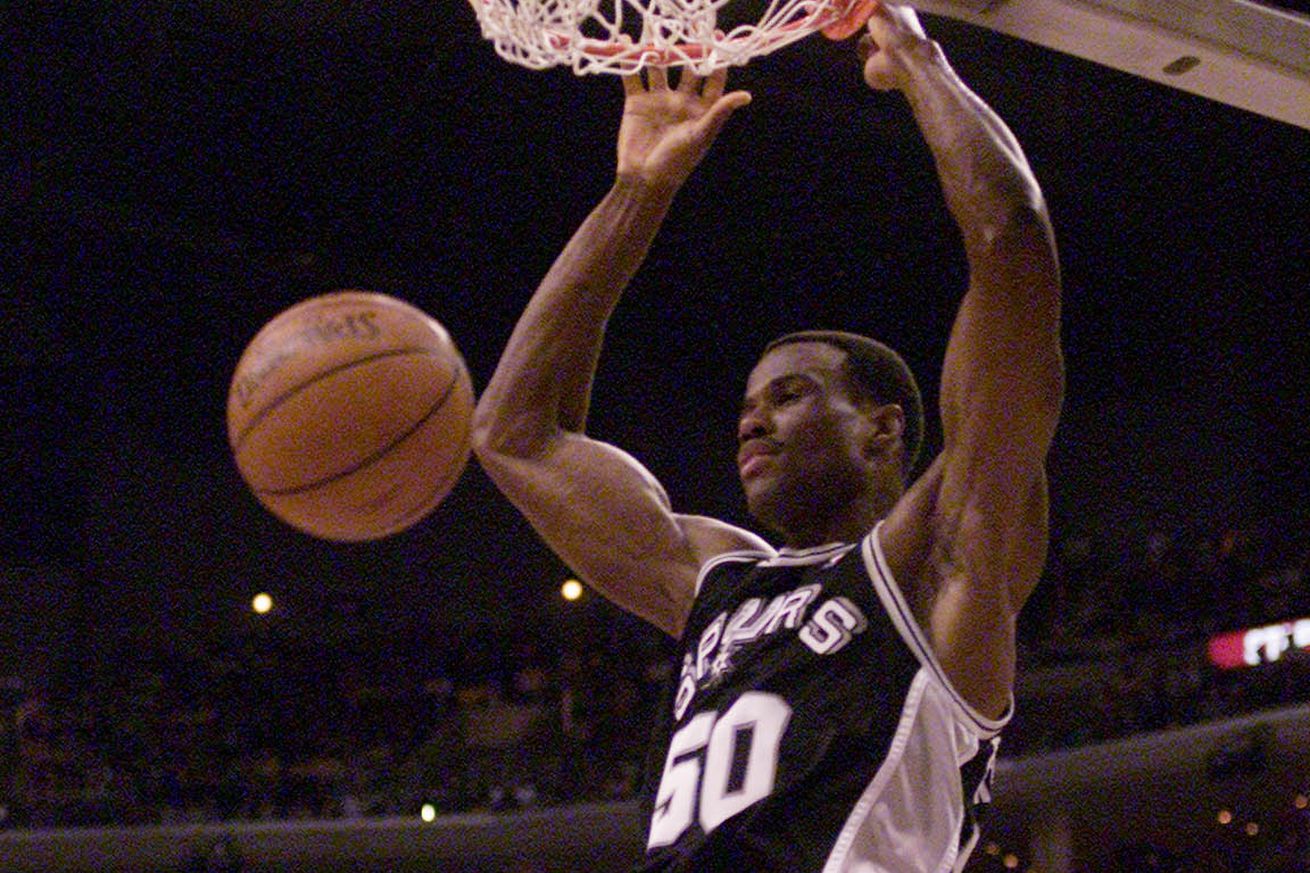 Selecting the top physical specimens San Antonio has had the pleasure of watching.

The Spurs haven’t been known for their electrifying athleticism very often throughout their storied history, but that doesn’t mean every player has been a complete stiff. In fact, one might argue that a top-10 list of Spurs athletes would actually be decorated with some impressive names.

There are a couple of rules to a list like this. The first is that athleticism consists of strength, speed, vertical, lateral quickness, explosiveness, and the flexibility to hang in the air and change plays on the fly. There might be other things to athleticism, but let’s focus on those qualities.

The second rule is that longevity matters kind of a lot. It is very athletic of someone to be athletic for years. Should someone argue that Jay Z is the greatest rapper of all-time, they might first point out that the Notorious B.I.G. is not the greatest because of longevity. Is this a legitimate argument? Maybe, but for this specific list, let’s say it is very legitimate.

The third rule is that a guy needs to play at least half a season for the Spurs to be considered. James “Flight” is a living dunking legend, only he got about six games of run in 2007, so he is ineligible for this list. Same goes for Shannon Brown, who could absolutely slice through the air like some kind of jet.

The Admiral is quite possibly the most athletic big men in NBA history. He could run the floor like a guard, protect the rim like Hakeem, body Shaq in the post, and finish around the rim like Ewing. He was big, long, unafraid to dunk on people, and had the ability to anchor a defense with a block as much as a steal. At 7-1 and 250lbs, he was about as athletic as a 7-footer can get.

Hopefully this one doesn’t rub salt in the wound for Spurs fans. No player to sport the silver and black has ever been as explosive as Simmons. His true on-court effectiveness was probably a little overstated during the playoffs, but that is largely due to his ability to make something special happen out of seemingly nothing. Putback slams, chasedown blocks, twirling layups while slipping on the court—Simmons is an elite athlete and has the tools to theoretically be an effective player for years to come.

Kawhi doesn’t possess the leaping ability that some of the most explosive players in the league have, but vertical leap is only part of the recipe. The new face of the franchise has an unreal combination of length, strength, quickness, leaping ability, and pure speed that is nearly impossible to find in a player of his skill level. It’s also worth noting his hands are larger than many people’s faces. He’s one of a kind, and seems to become a better athlete with every season.

Manu has never properly been given his due for his athleticism, and that’s most likely because his greatest attribute as an athlete is not his vertical jump or his strength, but his one-of-a-kind ability to contort his body into ridiculous shapes to make a play. It’s unlike anything else in the league, even at age 40.

He has obviously lost most of the pep in his step due to age, but he always seems to have just enough in the tank to unleash a ferocious dunk in traffic when it’s least expected. Over the years, Manu has shown his ups, lateral quickness, flexibility, and the strength to absorb contact and still finish above the rim.

Some might be shocked by Timmy’s place on this list, and to those people I say: being wrong every now and then builds character. Before his knee injuries, Timmy absolutely glided down the court. During the ’99 championship run, TD filled lanes on the fast break and at times, frankly, looked quite different than the guy that won four more titles over the course of another 17 years. He’s always had the long arms and strength, but his gracefulness, explosiveness in traffic, and agility upon first entering the league were impressive. To his credit, he was able to change much of his game to fit that dogged knee, but man, a young Timmy was a sight to see.

Without getting into how Spurs fans might feel about Derek Anderson, know this: The short-lived DA experience in San Antonio was quite explosive. His peak came in his lone Spurs season, so it’s difficult to rank him any higher, despite the poster dunks and feathery hanging-in-midair reverse layups. He wasn’t Kobe Bryant, but he was the unusual Spur that attempted highlight plays whenever possible.

Even in old age, RJ still has ups. He has always been a dynamic leaper, capable of throwing down a big jam or alley-oop on defenders. In fact, he is among the greatest alley-oop finishers the Spurs have ever had. He never truly had the lateral quickness or brute strength to be at the tippy-top of the league’s elite athletes, but he has consistently been a guy that can dunk on people in traffic.

The Memorial Day Miracle worker was once a swingman that was big, long, strong, had some bounce, and wasn’t afraid to dunk on people. Some of his finishes in the paint were downright shocking at times. He wasn’t at the top of the athlete food chain in the 90s, but like Kawhi, he had a little bit of everything.

Antonio Daniels was quick, fast, long, fearless, and big enough to play both guard positions. He was something like a more explosive George Hill and had a knack for sniffing out fastbreak dunk opportunities. His best production came after departing San Antonio, but while he was with the team, he was a key member of an electric bench crew that could swing games.

Alvin Robertson was more physically imposing than a 6-3 guard would normally be. His long arms, wiry-strong frame, and great footspeed made up for the fact that he was often undersized at the two-guard spot. Robertson’s bread and butter was playing passing lanes and swiping lazy passes and flying in for cat-quick dunks. The six-time all-defensive team guard and 1986 defensive player of the year averaged over three steals per game five different times.

Honorable mentions: George Gervin with his very long arms and otherworldly agility, George Hill and his all-around athleticism, Dewayne Dedmon and his long arms and leaping ability, Stephen Jackson and his mixture of quickness and strength, and Malik Rose for his energy and low center of gravity that made him one of the toughest post defenders in the league.

So this is my list. If you feel like someone needs to be moved up, down or onto this list, let me know in the comments.