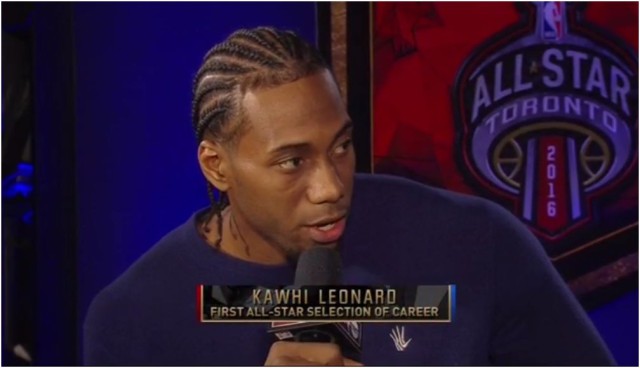 Charles Barkley named the San Antonio Spurs Kawhi Leonard the best basketball player in the world. While that statement is quite a mouthful considering the talents of Stephen Curry and Lebron James. The round mound of rebound stood by his comment, proclaiming Kawhi the best player in the world.  Kawhi Leonard the “Kawhi-It- Assassin” in not a man of many words but he did open up in an exclusive interview on TNT’s NBA Tip Off.  Kawhi Leonard was named a NBA All Star for the first time in his NBA career. This is a well deserved honor as Kawhi is one of the hardest working players in the game. Kawhi opened up on his TNT interview and credited his success to the San Antonio Spurs big three of Timmy, Tony and Manu Ginobili.  To see what the Kawhi-It-Assassin had to say about his nickname, check out the full interview in the video below. Be sure to watch the NBA All Star Game this Sunday on TNT as both Kawhi Leonard and LaMarcus Aldrige will be in the game.