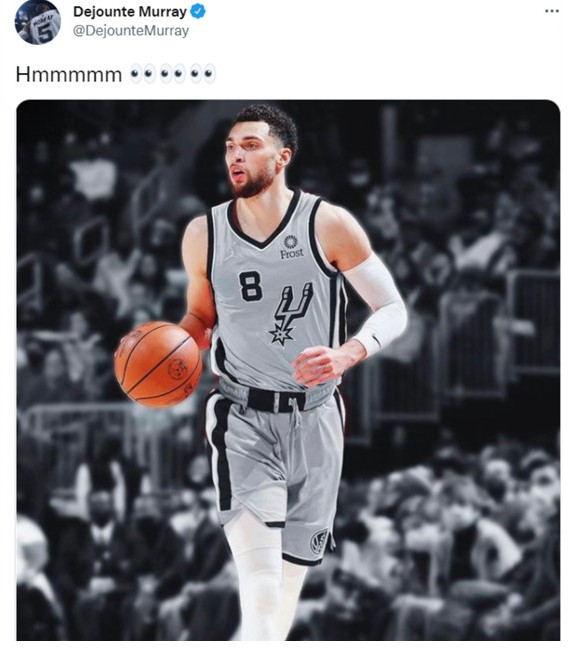 The Spurs’ season has been over for nearly a month now, but that doesn’t stop Spurs Twitter from flaring up every now and then, which is exactly what happened recently when a since-deleted tweet from Dejounte Murray and a quote from a certain projected top-three draft pick all came out at once.

First, the Spurs’ star guard tweeted a photoshop of his fellow Seattleite, All-Star swingman, and soon-to-be free agent Zach LaVine in a Spurs uniform while simply saying “Hmmmmm,” with some eye emojis.

While the tweet was soon deleted because it quite possibly goes against the NBA’s tampering rules — which prohibits players, coaches, or other team employees from talking to or trying to influence other teams’ free agents before the negotiating period — the message was clear that Murray would love to see the Bulls swingman, who has said he plans to “enjoy” free agency and take his time with his decision making, in San Antonio. (For what it’s worth, LaVine later responded, saying Murray was just messing with people.)

At the same time as all this was going down, a quote came out from another face of Seattle basketball that stirred things up even more. Duke star and projected top-three pick in the 2022 NBA Draft, Paolo Banchero, responded to a tweet asking if there was one player he could be drafted to play with, who would it be? His answer: Dejounte Murray (or the Rockets’ Kevin Porter Jr, another Seattle native). With these two events going down within 24 hours of each other, Spurs Twitter was in a frenzy, with some wondering if the Big Three of the future was forming before their eyes, and others lamenting that the Spurs didn’t tank to a top three draft pick (more on that later).

However, while the idea of a Spurs Seattle Three featuring an established star guard, high-scoring wing, and a power forward with serious star potential is admittedly pretty exciting (and nostalgic), it’s unrealistic. While it would be challenging enough for the Spurs to get one of LaVine or Banchero, getting both would be nearly impossible without some serious luck, and here’s why.

Let’s start with LaVine, who will be an unrestricted free agent this summer. He will likely command at or near the max, which for him would be at about $36.6 million. While the Spurs are one of only five teams who are projected to have that much cap space this summer (along with Detroit, Indiana, Orlando and Portland), it would require dropping their non-guaranteed contracts to make up the cap room, which would include Zach Collins, Tre Jones, Keita Bates-Diop, and Jock Landale. They would also have to completely denounce their rights to Lonnie Walker, making him an unrestricted free agent.

On top of all that, such a large financial commitment to one player at a position where the Spurs are already pretty deep would put the futures of players like Keldon Johnson and Devin Vassell in question, depending on what level of contract extensions they will require to keep around. It’s also worth noting that LaVine is set to have knee surgery this summer, so all this begs the question: is he really the “missing piece” that the Spurs need to return to the upper tiers of the league? And even if he is, is he worth a max contract and all it would cost the Spurs to get him, be it via free agency or a sign-and-trade? That is something the Spurs will have to carefully consider when looking at him or any other potential max player.

As for Banchero, who again is projected as a top-three pick, there is certainly no doubt he is exactly what the Spurs should be looking for this summer: a strong, lengthy, power forward with scoring ability and the physical — if unrealized — gifts to be a good defender. The problem is as the Spurs currently stand with the 9th worst record in the league, they only have a 4.5% chance at winning the top overall pick, 4.8% at the second pick, and 5.2% at third according to TankAThon.

While it would not be impossible for the Spurs to snatch him, it remains improbable. Barring some extreme lottery ball luck or an unprecedented fall down the boards for Banchero, they would most likely have to hope someone — likely either Houston, Orlando or Detroit — would be willing conduct a trade and give them their pick in a year when there’s some serious star potential at the top of the draft. Again, it wouldn’t be impossible considering the Spurs have three 2022 first round picks (their lottery pick plus 20th via the Raptors and 25th via the Celtics) and some young, promising players to offer, but how likely is it one of those teams would actually agree to a trade? (Or at least one that doesn’t include Murray, which defeats the purpose of this entire exercise.)

(And before anyone starts lamenting that the Spurs should have outright tanked or at least started tanking after Gregg Popovich got his record after their 26th win, take into account that they were just too good to be a bottom three — or even five — team. To that end, five teams still finished the season with fewer than 26 wins, so even if the Spurs didn’t win again after no. 26, they would only be in the 6th slot, and the odds of them getting a top three pick would still only be about 9 percent. Would it have been worth it?)

All of this is to say the idea of a Spurs Seattle Three is little more than a pipedream. While signing LaVine can certainly by done (whether it’s the right decision is the topic for another day), and trading up for a top pick like Banchero is not impossible on its own, making both happen at once is where the fairytale likely ends. Barring some extreme lottery ball luck or a very willing trade partner from the top of the draft, the Spurs just don’t have the assets to go after both. It’s always fun to dream while waiting June to roll around, but not every dream can come true.

However, there is still time to keep the dream alive, as the NBA Draft Lottery is set for May 17 at 7:00 PM CT on ESPN, the draft itself is on June 23, the Moratorium Period (when teams can begin negotiating with free agents) returns to July 1, and finally free agents can begin being signed on July 6. Anything can happen between now and then, so stick around!