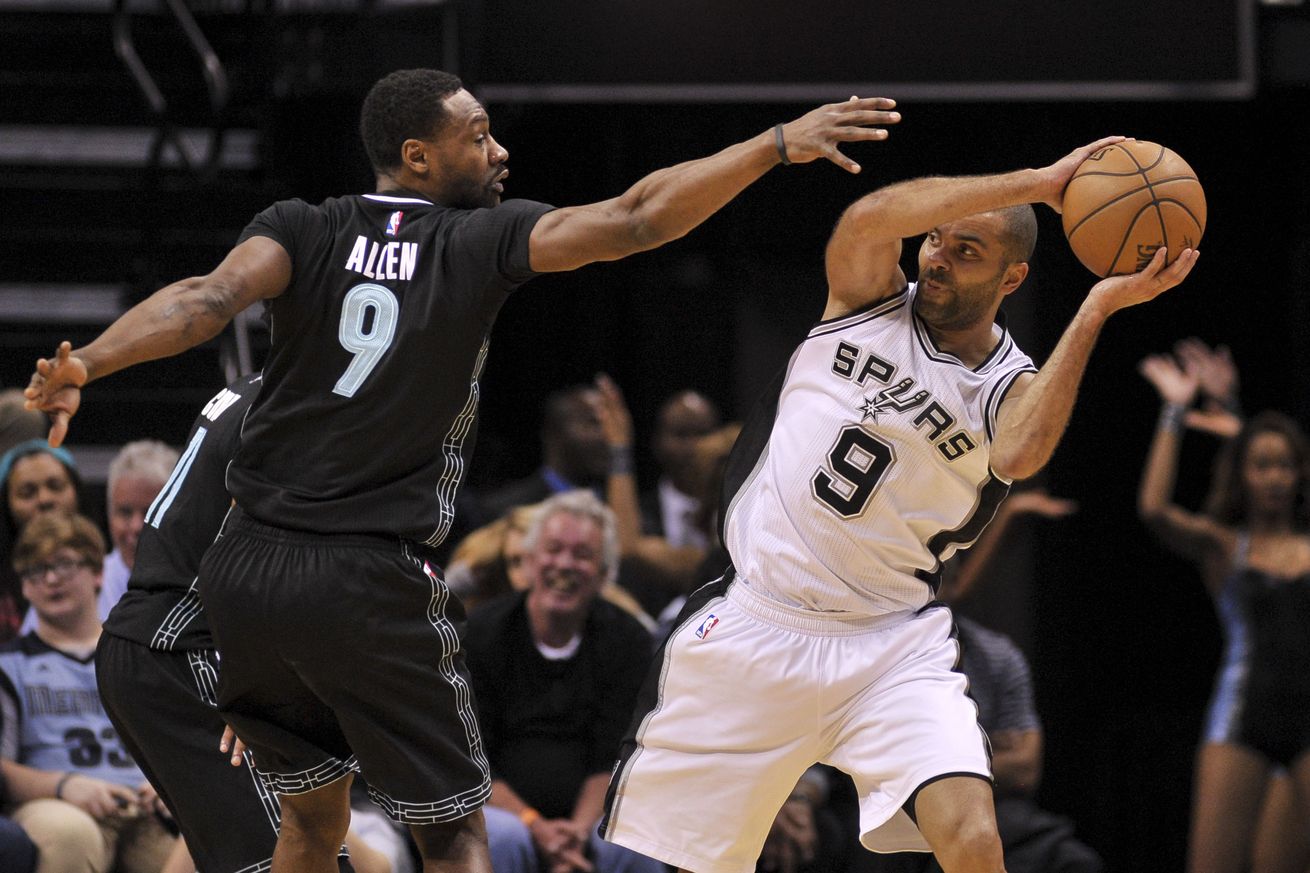 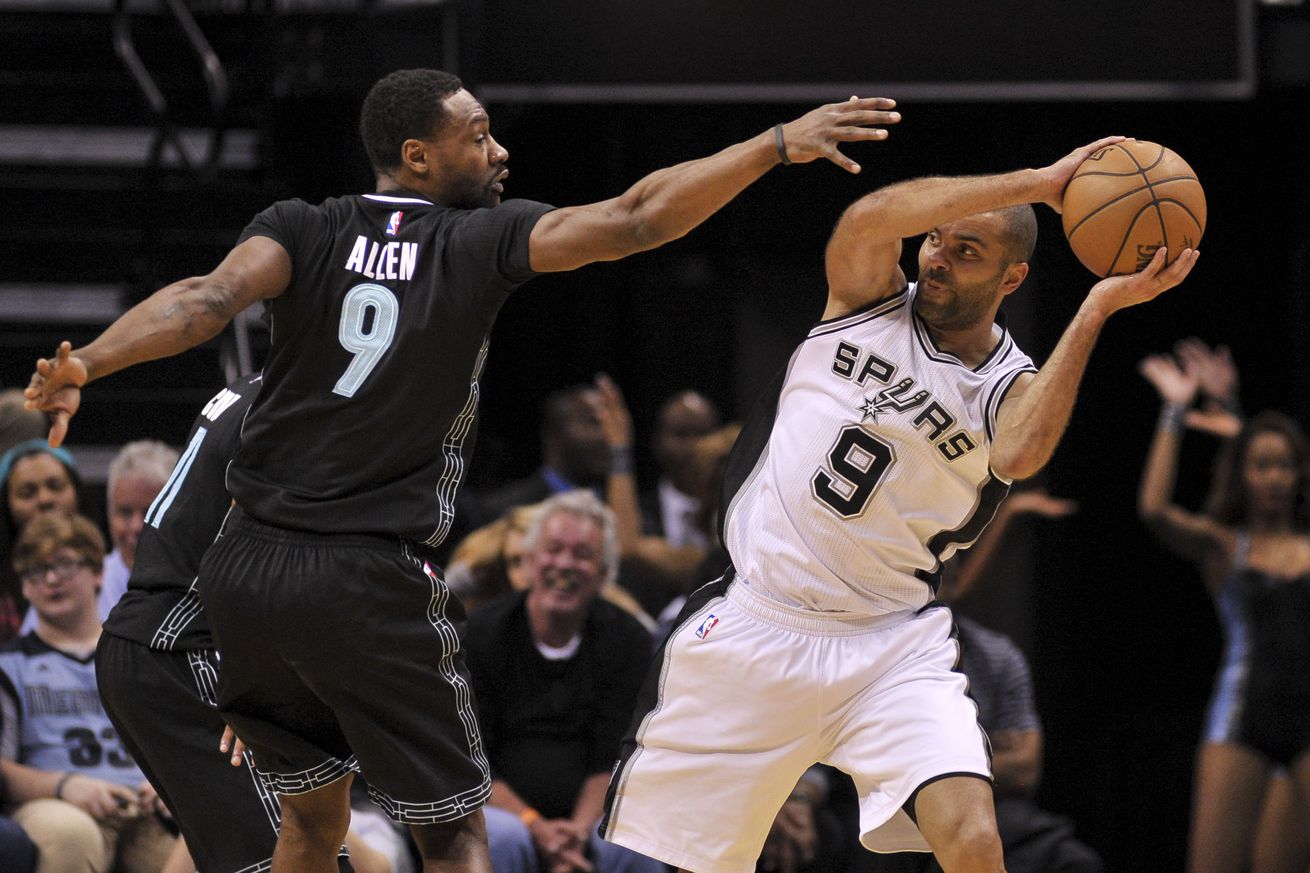 The Memphis Grizzlies defense stymied the Spurs, who couldn’t find anyone to score without Kawhi Leonard.

Kawhi Leonard was a late scratch for the Spurs as Coach Pop decided to not risk aggravating the thigh contusion he had suffered against the Thunder by challenging the Grizzlies’ physical defense. Pau Gasol was also missing, out with a broken finger and not expected to return until after the all star break.

Jonathon Simmons and Dewayne Dedmon started in their places tonight, but neither of them were able to have much of an impact on the game. But you really can’t blame them for the loss, because just about everyone wearing Silver and Black had a dismal performance, and the awful night was capped by the Spurs scoring just nine points in the final quarter, as the Grizzlies won easily.

LaMarcus Aldridge struggled with poor shooting and turnovers, as Memphis defenders got their hands on the ball and slapped it away. For some reason, he seemed out of sorts for most of the game, and he virtually disappeared late after he got into foul trouble. I’m beginning to think that LaMarcus is a good complementary piece, but he’s not the kind of player who can take over a game when he’s the center of attention. As Kawhi’s sidekick, he’s fine. He’s more of a Robin than a Batman.

Patty Mills also had an awful game, missing open shots and even making bad passes that turned fast breaks into turnovers. But he did have this one really good looking pass that led to a wide open shot for Danny Green.

“one heck of a shot!” pic.twitter.com/ticDtcZlPt

The Grizzlies didn’t exactly burn up the scoreboard with their offense, but they played the best defense that the Spurs have seen all year—the paint was like a minefield for the good guys. They couldn’t hit any outside shots, and when they went into the paint, the Grizzlies always had someone there to deny them, and force them into a blocked shot or a bad pass. It was a masterful defensive performance, and the Grizzlies will be a very difficult matchup for the Spurs should they meet in the playoffs.

I usually write a lot more words in these articles, but it’s hard to write anything when everyone on the Spurs played badly. Well, almost. Kyle Anderson played well and provided some spark when he came in for much of the third quarter. Although he couldn’t hit his free throws, along with everyone else on the Spurs. David Lee played really hard and was one of the better performers on the offensive end for the Spurs, but he wasn’t big or quick enough to defend the Memphis bigs. Danny Green played reasonably well, and his handle looks better than it ever has, but he’s not and never will be a player that can create his own shot.

Well, it’s only one loss, and the Spurs are firmly ensconced in second place in the Western Conference playoff race. It’s on to Philadelphia on Wednesday for a meeting with the young 76ers, headed up by former Spurs assistant Brett Brown. Joel Embiid is still injured but he might play on Wednesday, as the Spurs seek to even up their record on the Rodeo Road Trip at 1-1.

For Spurs vets like Tony & Manu, the Rodeo Road Trip is nothing new … but seven members of the squad have never experienced it before: pic.twitter.com/jq56y1Idtd

I thought I’d leave you with something a little different. Zoe Keating is playing at the Parish in Austin on February 17, it’s a show I’d recommend checking out (I’ll be there):