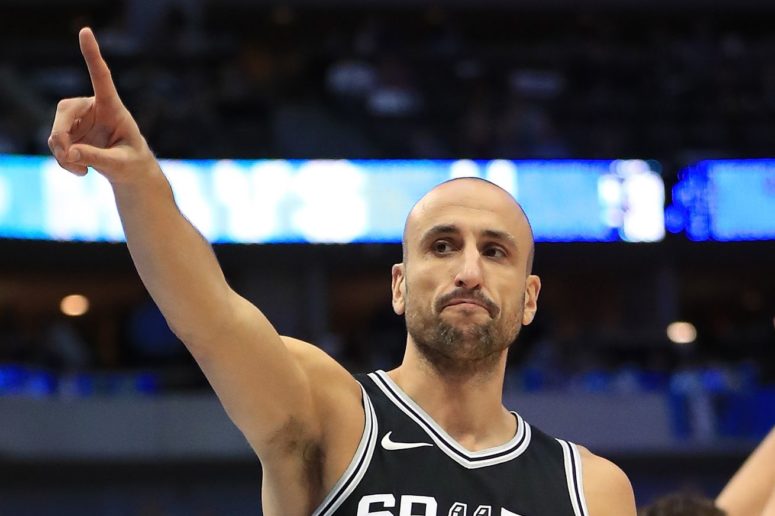 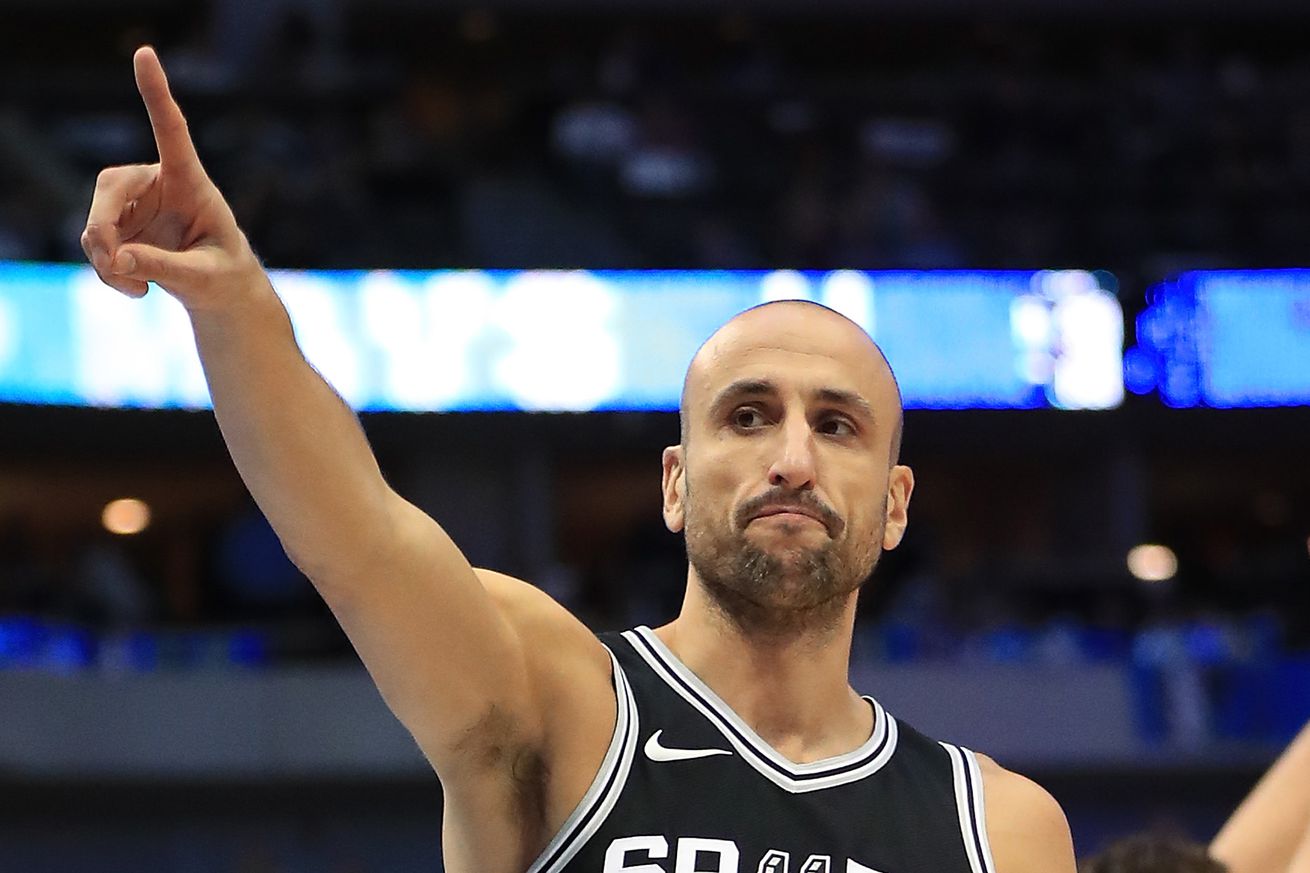 The soul of the Spurs is still beating.

The 40-year-old Argentinian wonder closed out both halves for the San Antonio Spurs in dramatic fashion, like he’s so often done over the past 16 seasons. A buzzer beater at the end of the first half gave the Spurs their first lead against the league leading Boston Celtics.

Ginobili!! Ending quarters with a flourish for 16 years and counting. #StillManu pic.twitter.com/qh7ha4CXJ7

Then a high arcing rainbow three over Al Horford sealed the win in a game where the Spurs lacked Kawhi Leonard, Kyle Anderson and, for the second half, Danny Green. The block on James Harden in last year’s playoffs seemed like it could be the final miracle in Manu’s gospel, but he’s still turning water into wine — losses into wins.

The value of the end of quarters has never been lost on Manu. He rarely misses an opportunity to set up 2-for-1 possessions. He will always throw his body into making a play at the end of a quarter or a game. Sometimes, he comes up short with a gaffe so quintessentially Manu that they’ve become just as big of a part of his narrative as his brilliance. The extremity of his blunders and heroics make it hard to believe they come from the same player. How can someone be capable of such simultaneous goof and wonder? Only Manu.

See the last minute of Game 1 in the 2013 series against Golden State where Manu forced an ill-timed three with the Spurs up five, allowing the Warriors to crawl back into the game and the Spurs to fumble the game away. Pop said he wanted to “trade Manu on the spot.” Like he was conscious of his own paradoxical nature, he then nailed a game winner on the Spurs final possession, leading Pop to say he “wanted to cook him breakfast.” He is perfect in his imperfection.

He’ll probably save a kitten on the way home.

Basketball has experienced many revivals and provided platforms to many prophets over the last two decades. Passionate masses have donned the colors to sing the praises of many teams and figures. Some of these awakenings have been feverish, but short, ala the Miami Heat. The Spurs, even in their dominance, have never had the following that other franchises have had.

Players like LeBron James, Kevin Durant and Kobe Bryant and teams like the Warriors and Lakers have crowded arenas with onlookers desperately trying to worship at the altar even for a brief second. The Spurs have never swept the country or the basketball globe with the fervor that other dynasties or superstars ignite. They’ve been the old church…ever present, faithful and constant, but sometimes out of sight. Other teams have been like a new age religious trend hat sweeps and takes hold, but is unable to take root in the hearts of their followers forever.

The Spurs are like national monuments to the hoops populous. They are interesting to see and to tour, to nod at and appreciate aesthetically While many of the Spurs opponents are sources of instant gratification, even if the satisfaction is only momentary.

The pillars of the Spurs dynasty are like those monuments. David Robinson was a prophet paving the way for the institution that was to come, but he was overshadowed by the titans of his era. Tim Duncan was so consistent and so unchanging that he was like a mountain whose presence was accepted and appreciated, but sometimes ignored.

Manu Ginobili is the exception to this line of thinking. He’s the fire of the Spurs. His flair and unpredictably are the Silver and Black’s spice. Manu has always been my answer to the assertion that the Spurs are “boring.” He draws in dozens or hundreds of blue-and-white adorned fans nightly. Manu pilgrimages are made by loyal Argentinians and other Ginobili-faithful regardless of which city the Spurs visit. It’s because of games like Friday night’s that he has such a following. Manu is a basketball sanctuary.

His followers are thankful that his shrine remains open. He’s still providing memories at an age when new great moments from favorite athletes aren’t usually plentiful. On a day when he was tired from an early morning play-date with his children on a snow day, he still managed to drill a three-pointer against the league’s best team on a defender who about half his age.

Manu’s reaction to the three in the first half was a coolness that said he’s “been there before.” After Kyrie Irving’s buzzer beater rimmed out, Manu stood on the court for a second and collected himself as if to take in the moment. Through it all, he still doesn’t know how many more nights like these there will be. He had a scary near knee injury against Miami on Wednesday and was keenly aware of his age after the game. He knows that his story is wrapping up, but he’s concluding it like only he can.

1) Rudy Gay was aggressive all night on both ends.

However, he was an animal on offense in the fourth quarter. He had seven points and led the Spurs in scoring in the final period. Sean Elliot refers to Gay as a “point shark,” who can smell buckets in the water. Gay consistently got timely baskets when the Spurs desperately needed them. He also provided a huge offensive rebound and tip-in late in the game.

Clutch rebound and tip by Rudy Gay in the 4th tonight. His effort and fourth quarter scoring was huge. Not to mention the closeout of Kyrie pic.twitter.com/4aeBYtvM2Q

2) Last year against the Rockets, Kawhi Leonard put on a superhuman display with a game-winning three and block on Harden, you know the story. The reaction of Manu to his younger teammate was one of sheer amazement. Danny Chau wrote in The Ringer, “Manu Ginobili, one of the five greatest Spurs of all time, in shambles, shaking his head and propping his arms in surrender-cobra position, befuddled by what Kawhi had just done.” Manu Ginobili at that moment was like all of us…just a fan who was awestruck at Leonard’s abilities. At 39, and not on the court for those critical possessions, you could have assumed that was the beginning of Ginobili’s time in the congregation and not in the pulpit. Almost a year later, the roles were reversed and Manu’s game winning three produced a rare smile from the sidelined Leonard.

3) Not to be lost in Manu’s heroics was another brilliant game from Aldridge. The Spurs started this game down 11-0 and finished the first quarter down only five, thanks to LMA’s 12 in the quarter. He consistently abused smaller defenders in the post all game. Aldridge worked for each bucket against a talented defensive team, but his skills in the post against smaller ball lineups are incredibly valuable.

He’s now led the team in scoring in 21 of 26 games this season. #GoSpursGo pic.twitter.com/9fwNDutDkw

4) The Spurs tossed soft passes and lobs around the court all night. If the Celtics had taken advantage of the Spurs lazy feeds, this game may have never came down to Grandpa Juice. Nonetheless, this decisive dart from Brandon Paul to Pau was so refreshing after what seemed a game of limp, half-hearted throws around the court.

Tony Parker gets the ball up quickly and pressures the defense which creates all kinds of problems for Boston’s defense. pic.twitter.com/y80yRQZWcg

5) The Spurs rarely have an answer against Kyrie Irving. I saw him put up his 57 point performance live in 2015 and it felt like I was being beaten with socks full of bars of soap. Irving’s 36 points tonight were the most an offensive player has put up against the Spurs this season. The Spurs were lucky to get out of there with a win, especially with Irving’s final attempt deciding to turn back halfway into its journey down the bucket. It was definitely the best win of the (hopefully almost over) Kawhi-less era.

A Wish: For Danny Green to be okay. He didn’t play in the second half because of a “tight groin.” He’s been special this year and will take such a defensive load off of Kawhi when he returns. This stat is unreal. “Danny Green now has 500 steals and 401 blocks in his career. Only three players with 500 steals, 400 blocks and 800 three-pointers since Green entered the NBA in 2009: LeBron James, Kevin Durant, Danny Green” via Jordan Howenstine. Everyone should send Danny a Christmas Card.

On Fridays we wear flannel.

Brad Stevens: “[Manu] is one of the best players at the end of quarters that I have ever seen.”

Manu on the game winner: “It’s just a shot, it went in. I think I got a little lucky.”

Manu said Horford contested the shot very well, so Manu had to put more arc on it than usual.

Pop on Manu excelling at age 40: “Like he told me many years ago, this is what I do.”