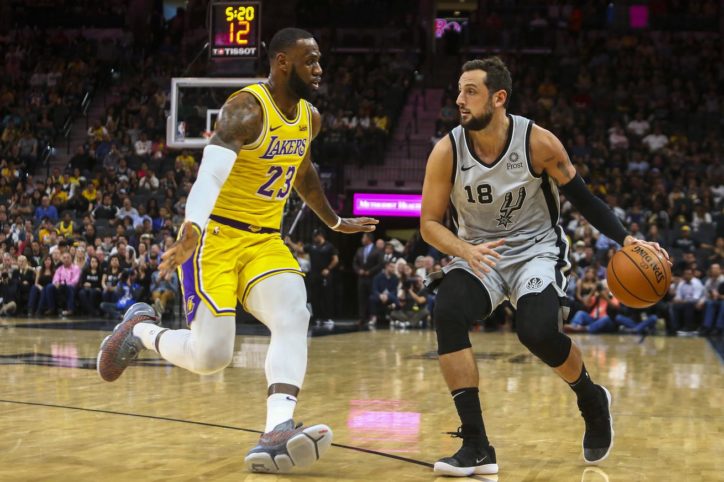 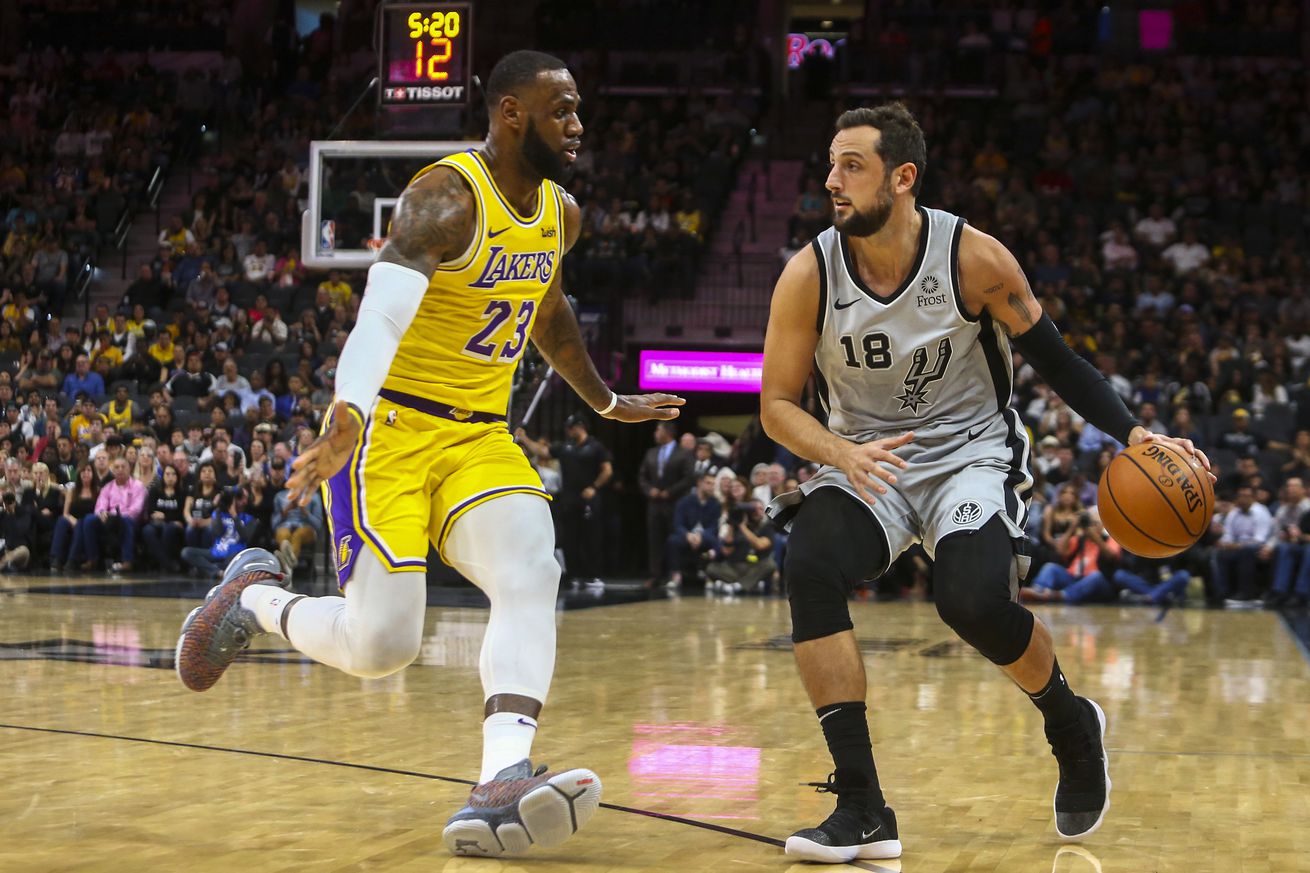 Revisiting how “Marco Watch” came to be.

I went into this 2018-19 Spurs season knowing little about and expecting nothing from Marco Belinelli. Sure, his previous run with the organization was fruitful. I remembered him hitting some cool threes and some weird layups and looking silly in those sleeved jerseys that were all of a sudden a thing. He contributed to an exciting group off the bench during the championship run in 2014 and even hit one of the most important shots of the Finals to help stave off a mad Heat rally in Game 3.

He was a valuable member of the beloved Foreign Legion lineups, along with Patty Mills, Boris Diaw, and some guy named Manu Ginobili. I think he won the three-point contest at the All-Star game one year? Look, what I’m trying to get at here is that I liked Marco, sure, but his game never stood out to me. Of course, the Spurs had quite a bit going on back then when you really think about it.

Still, his return last summer — combined with a high amount of turnover on the Spurs roster (including the loss of two franchise staples, a key starter, and someone’s nephew) — meant a certain amount of satisfaction in seeing a familiar face. This was my first season watching each game with the added element of “Uh oh, I need to actually find things to write to write about now,” and Marco quickly became an unreasonably valuable source in the “things to talk about” department for What We Learned.

Because this became such a beloved segment, it only felt appropriate to go back revisit the origin of “Marco Watch” and how it evolved over the course of the season. This will be a five-part series, so be sure to stay tuned as they come out.

I made numerous cracks about the Marco Belinelli signing in the off season, so I’d like to take this opportunity to eat a little crow. It’s really fun having Marco back! Maybe it’s just been a while or maybe he’s just not playing too many minutes, but he seems impressively spry this year. Specifically, his cuts to the basket are quick and sharp and cause all sorts of problems for opposing defenses. Maybe it’s just that they’re as surprised as me to see Marco streaking across their face, curling into the lane and finishing at the rim. I don’t remember that move being in his arsenal last time around.

Marco Belinelli kind of came in and closed the game down for the Spurs . . . raise your hand if you saw that coming. In the final few minutes, he snagged two steals, hit a corner three, and also pulled off a very cool finger roll. He finished the night with 14 points and my sincerest apologies for continuing to crack jokes about Belinelli. He’s sort of the secret sauce for the Spurs right now and I’m just some guy.

In December, I decided to officially designate the final section of my “What We Learned” pieces MARCO WATCH (pronounced with the same inflection that Paul Rudd says PANDA WATCH) because he was routinely doing at least one thing a game that left me wryly shaking my head and wondering, “How exactly did he do that?” Or, more often, “What exactly did he just do?” There was something about his game that was hypnotically drawing me in to it’s orbit and I desperately needed to get to the bottom of it.

At the end of the 3rd quarter, Marco Belinelli took this totally normal looking shot as the clock ran out and drained it. Honestly, I think we should just have him on the floor at the end of close games no matter what because he’s clearly built himself into an ELITE, absurd shot-taker, and that kind of asset is invaluable in crunch time.

Our favorite Italian continued his war on the concept of traditional shooting form. Near the end of the first, he came around a screen and took a three that started out looking super normal and then somehow finished with him starfishing and almost falling to the floor. The next time he got the ball he did the same thing and drew a foul from Patrick Beverley. It earned him three shots at the line and also generated this exchange between the refs, Beverly, and Doc Rivers:

Clippers complaining about Marco Belinelli kicking his leg to draw a foul on that 3. “Every time, he kicks his leg,” says Patrick Beverly. Doc tells refs: “And you gotta know that.”

The Sixers were the last team Marco played for, so I’m sure there was a lot of emotion for him coming into this game. He had a bit of a quiet night though, only six points and no crazy shots. Yep. Nothing too weird. Just kidding, take a look at this step back three. As the defender rushes out to him in the corner, he half heartedly raises the ball into the air and weirdly sticks his right leg out which, to be fair, is a pretty accurate representation of his shooting form. The defender doesn’t totally bite though and now is just sanding all up in Marco’s business. So, he takes the path of least resistance and decides to begin the process of maybe driving to the basket. This causes his man to fly back almost to the paint which seems to even takes Marco by surprise. Finally free to take the shot he wanted all along, our dude calmly collects himself and drains the corner three finishing, of course, on one leg. Eat your heart out, James Harden.

This guy. Marco almost led the team in scoring last night with 18 points and continues to make play after play that defies the logic of gravity, time, space, and, if we’re being honest, good basketball sense. Far from being simply a spot up three-point specialist, he’s almost more dangerous with the ball in his hand because no one, least of all Marco, seems to know what he’s about to do with it. He’ll start to drive around a screen and just pull up with no notice. He’ll take shots where he actually releases the ball about four feet to the left of where he originally pulled up to shoot. It’s a fascinating display of creativity and shameless basketball id. My favorite play of his in this game came in the 3rd quarter. Belly receives a pass on the run, weaves his way into the lane, and jumps up into the air. At this point, he’s extremely trapped in his situation so he shoots the ball out to DeMar in the corner. DeMar fumbles the pass because, of course, Marco was doing a no-look job and DeMar was surely thinking, “no way he would try to get it to me.” Marco then scrambles out to retrieve the ball and, with the shot clock careening toward zero, launches up a three before collapsing to the floor. It was a masterpiece.

Marco Belinelli had a couple cool highlights in this game. He had a nice three near the end of the 1st, he had a few good assists, and he even had an incredible little give-and-go with Poeltl that resulted in, of course, a weird sideways fade-away three that he nailed while falling out of bounds. This is all well and good, but these are not the plays I want to talk about. I want to talk about the three he hit at the 6:24 mark of the 4th quarter because I think it gets at the particular weirdness of Marco’s game that seems to delight me so much. The Spurs were in the middle of making their run at this point and things were going great. DeMar makes a nice steal and everyone breaks down the court. He weaves into the middle and throws it over to Derrick. Derrick then turns around and tosses it off to Beli at the wing for a wide open triple. This is a shot that Marco has probably taken thousands of times over the course of his very long NBA Career. It’s an in-rhythm transition three without a soul in sight. This should be absolutely money 9 times out of 10. So tell me, why why why why why do you think Marco ends up way the heck up by the basket by the time the ball falls through hoop? It’s so silly. No one in the world covers more ground after the shot than this dude, and you know what? It really works for me.

Look at our beautiful boy floating through the air with the greatest of ease on this little number from the 3rd quarter. A pump fake draws his man up into the air and instead of taking the three free throws, he charges into the lane with only one though on his mind: “I’m definitely going to bank this floater from the free throw line.” I really can never tell if Marco Belinelli is doing something on purpose, or if he’s just sort of making it up as he goes along but, either way, we’re all better people for being a part of it.

Marco is going through this phase right now where he isn’t getting a lot of calls. It’s almost like the refs have picked up on the fact that he splays his leg out every time he shoots the ball in order to potentially pick up fouls from unassuming defenders. This has put our close friend Marco into a position where, instead of the contact coming to him, it is he who must venture out into the world seek the contact for himself. Watch him on this play, like the grand explorers of old, journey inside the three point arc, receive the handoff from Jakob Poeltl, and attempt to take a shot from as close as is humanly possible to inside the jersey of both his teammate and his defender. In the process, he also discovers a new launch angle for his shot that settles somewhere around 45 degrees before collapsing on the floor and rolling back out to beyond the three point line. The Universe is trying to tell Marco what he can and can’t do and Marco is defiantly responding, “not today, Universe.”

Marco Belinelli had a shot in the 4th quarter that, at this point, is as routine for him as a layup. After literally running in circles for a bit off in the distance, he sort of feigns a screen on Derrick White’s man and serpentine cuts to the basket. There, he receives a pass from DeMar and leans practically horizontal in order to bank it in for two. The angle is good, sure, but the amount of distance he covers in the air from when he starts his shot to where he actually releases it is unreal. Of course he hits the floor on his follow through and slides almost out to the three point line because when you’re given a runway like that, why wouldn’t you? He’s a master showman, and every detail matters.

Check back soon for Part 2.

The evolution of ‘Marco Watch’ for Spurs fans
Source: Pounding The Rock