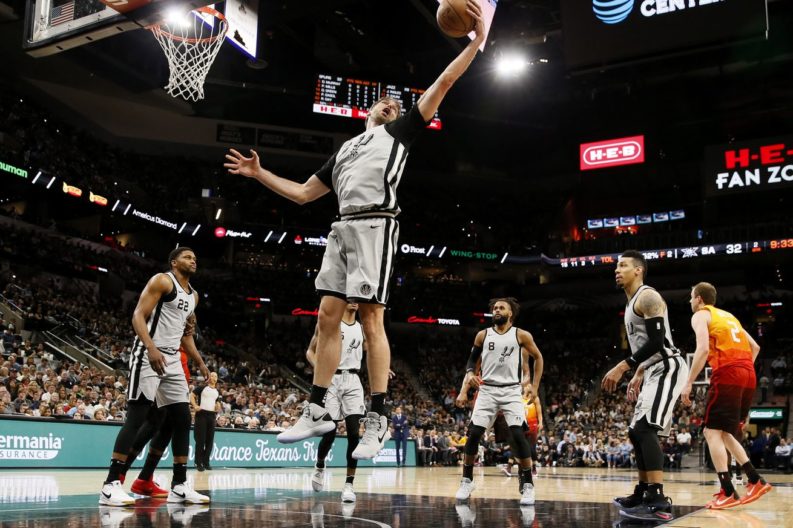 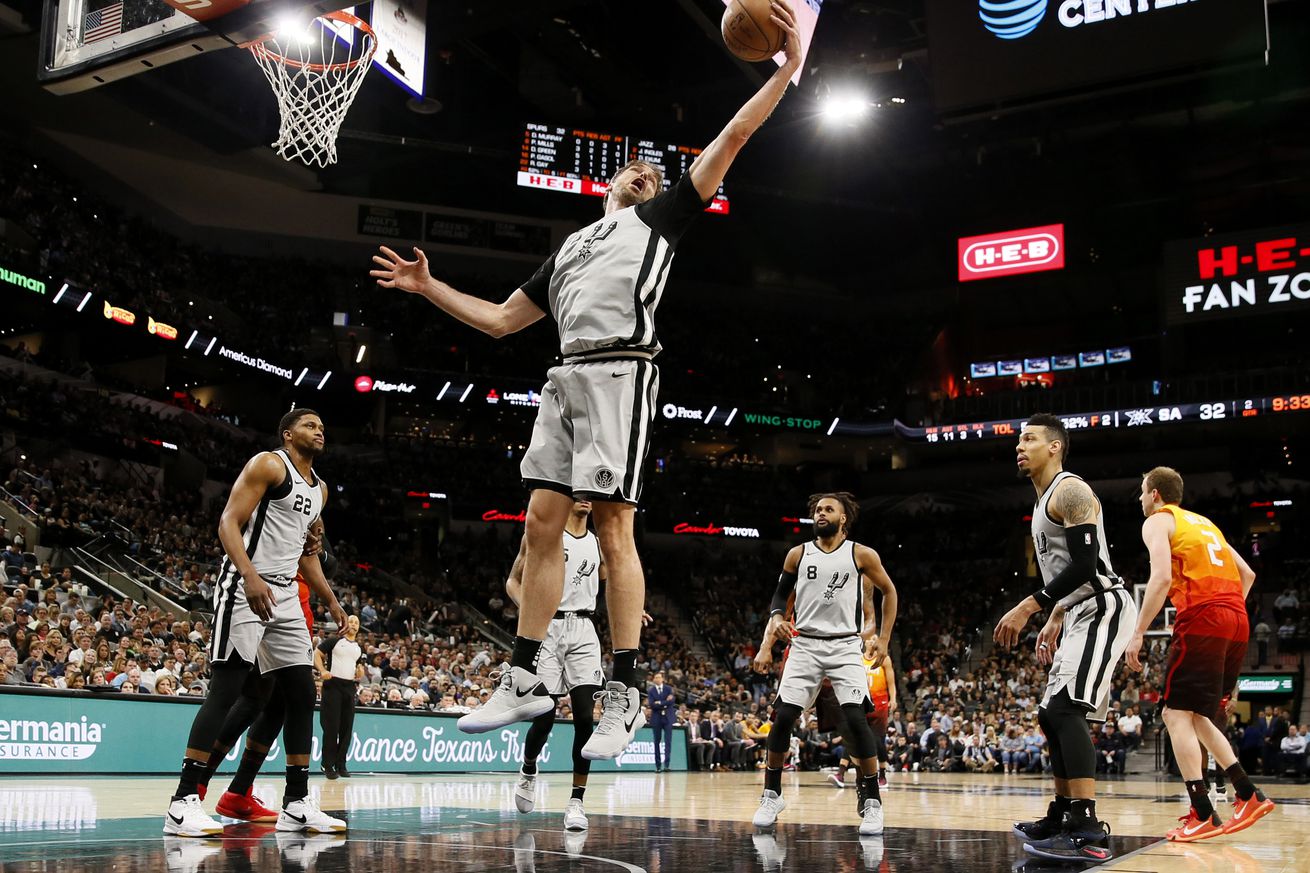 Spurs players don’t typically boast gaudy rebounding stats, but that hasn’t stopped them from being one of the better teams on the glass the past three years. Expect that to continue in 2018-19.

Rebounding is a problem. On some plays, it’s the single most important thing you can do. One rebound can become a legend or decide a championship. Yet, over the course of a season, it’s the least important individual stat in the box score. Some very smart people have taken this problem apart in different ways, but there still isn’t an easy way to understand the value of one of the game’s most fundamental individual skills.

The result is that we know we need to dig a lot deeper into player tracking, lineups, and schemes to really understand what rebound numbers say about a player’s abilities and contributions. The type of rebound, including whether it was contested or not, may be helpful, but without understanding a player’s role on the court at the time, it’s difficult to understand the value of the board without watching the play. Rebounds are good, that much is clear, but for individual players it’s too big of a category to be a meaningful metric.

We know that rebounding is important. It’s one of the four factors, the simplest statistical predictor of team success. Using Dean Oliver’s original weights (shooting = 10, turnovers = 5-6, rebounding = 4-5, and free throw rate = 2-3), the four factors were almost 96% accurate in predicting team performance over the last 3 years (data from BasketballReference.com). You can adjust the weights and see the results with the tool below. Each of the four factors is displayed, along with their combined relation to Team Net Rating at the top. Adjust the weights in the bottom right to see how they strengthen or weaken the relationship. Select the trend line to see the value of r-squared. The closer to 1, the better the relationship. You can also filter by team or season.

Even without the other three factors, though, team rebounding % has a positive correlation with winning.

Teams that tend to outscore their opponents also tend to rebound well. Put another way, better team rebounding is either a cause, a symptom, or a by-product of being a good basketball team. The relationship is such that a 1% increase in rebound % is generally equivalent to a 1 – 2 point increase in team net rating. The best 3 teams from each of the last 3 years have an average net rating of +2.3, which amounts to about 49 wins, or 8 games over .500 each year.

Individual rebounding, however, has a much less direct relationship to any other statistical predictor of individual or team success. Even the very best rebounders, by per game stats, see very little positive return in terms of team wins, especially when compared with the rest of the box score. This is a look at how the top three players in each statistical category each season since 2015 fared in games they played, adjusted to an 82-game season.

The top 3 rebounders were, on average, 2.3 games above .500, whereas the top 3 in blocks were 8.1 games above .500, and so on. To be fair, top 3 is an arbitrary line to draw and 3 years is a small sample size, so this certainly doesn’t prove rebounds are or aren’t valuable, but it’s a pretty quick way to highlight the discrepancy between the value of this particular part of the box score and the rest. Individual rebounding is far less predictive of team success than team rebounding, or any other box score stat.

Not all rebounds are created equal

This is a contested offensive rebound that creates a high value opportunity, with LaMarcus drawing a foul just before the shot that would’ve been an and-1.

This is a common defensive rebound with no opponents in the vicinity. The play, the personnel, the situation, and/or the scheme have combined to produce a scenario where the defensive team is getting the rebound with little or no resistance. On this play, LaMarcus grabs the board, but either Danny or Rudy could have easily secured it. Only Patty was actually doing work by half-heartedly boxing out Clint Capela, who is really only half-heartedly going after the ball.

This one, off a missed free throw, is essentially meaningless. The player who happens to be standing in that spot gets the board, in this case, Pau. Each of these plays counts as one rebound, but the value of each is vastly different.

Happily, I couldn’t find any examples of stolen rebounds in that game. Outside of some Tony Parker – Matt Bonner shenanigans a few years ago, the Spurs typically don’t traffic in that silliness, but this is what it looks like.

You can also check out a more notorious practitioner here.

If you looked closely at the results, you’ve probably already spotted the problem. Being good at grabbing contested rebounds doesn’t appear to be any more predictive of team success than rebounding in general. In fact, if we use the same expedient approach we used on traditional box score statistics (W-L record for top 3 in the league for the last 3 seasons) we get essentially the same results. The best players in the league at grabbing contested rebounds were only 2.5 games over .500 per season, just a little better than total rebounds.

That leads us back to team rebounding. It’s the only aspect of rebounding with a good correlation to team success, which means finding a way to measure a player’s impact on team rebounding, without caring how many rebounds they actually pull down, could be meaningful. Fortunately, NBA.com’s impact tool provides the data to determine how a team’s offensive, defensive, and overall rebound percentages change with a player on and off the court, though the data only goes back to 2015-16. You can also find much of this information with pbpstats.com’s team on/off tool, with the added advantage that you can go all the way back to 2001-02.

The data is here (*players who were traded during the season are excluded). It is essentially +/- information for how a team rebounds with and without each player on the court, and as such, is subject to all the usual disclaimers about lineups and rotations (e.g. if your backup is bad, you will look very good, regardless of whether you actually are). You can see it plotted, along with traditional per game rebounding numbers and individual rebounding % against individual net rating here. There’s a lot of interesting information in the data, like Steven Adams’ impact on the rebounding #s of every member of the Thunder. If you share meaningful minutes with Adams, you’re among the league leaders in effect on team rebounding %. If you don’t, you’re at the bottom.

As for the Spurs, their ratings lined up pretty well with what you’d expect:

LaMarcus Aldridge, Dejounte Murray, and Rudy Gay had the biggest positive impacts on team rebounding, while Davis Bertans is the only player with a significant negative impact who’s coming back this season. He’ll most likely be a net negative again this year if he spends much time on the court without LaMarcus and Dejounte. The team also added DeMar Derozan, who sported a +2.4 impact on team rebounding % in Toronto last season, and Jakob Poeltl, whose -1.0 looks pretty bad until you realize he’s replacing Joffrey Lauvergne and his -1.7.

Looking at the whole league for last season, there is a positive correlation between individual impact on team rebounding and individual net rating.

You can see how broad the distribution is. It’s not a strong correlation, but every 1% increase in impact on team rebounding is generally equivalent to a 1 point increase in individual net rating. It’s a better fit than either rebounds per game or individual rebound %, and much better than either offensive or defensive rebounds alone.

It’s important to note that this holds true even when we control for position by dividing into guards, wings, and bigs. This is surprising, particularly in the case of guards, because a common argument for guard rebounding is that it enables teams to get into transition faster. While it may be true in certain cases, it doesn’t appear to hold across the board. Using guard rebounding from BasketballReference.com, and team transition data from NBA.com, aggregated guard defensive rebounding by team wasn’t related to transition success in the 2017-18 season in terms of total opportunities, points per possession in transition, or total transition points.

With little direct relationship to team success, either in terms of team rebounding or creating more valuable opportunities, per game rebounding numbers and individual rebound percentages should be largely irrelevant in the evaluation of players and their value. How the team rebounds when that player is on the floor is far more important.

Which brings us back to where we started. If you don’t rebound well, your team is likely to lose, but having one of the best rebounders in the league on your team doesn’t mean your team will rebound well or win. Offensive rebounds, contested rebounds, and especially contested offensive rebounds are clearly valuable, but players who excel at grabbing them don’t necessarily win any more games than those who don’t. Even measuring a player’s impact on the team’s rebounding percentages offers less insight into team success than simple per game stats for assists, blocks, or steals.

After all that, if you’re still into double-doubles, or lamenting Aldridge’s rebounding #s, it’s time to rethink your position. The Spurs have been 6th in overall rebounding rate the last two years and were 4th the year before without a single player in the top 20 in rebounds per game, and that’s what matters. They’re bringing back their top three rebounders in terms of impact on team rebounding, in LaMarcus, DeJounte, and Rudy, and should expect DeMar and Jakob to represent upgrades as well.

In that respect, the team is in good position to get after one component of the four factors. If you played around with the tool above, though, you know that rebounding isn’t nearly as important as shooting and turnovers. Still, finishing defensive possessions has long been a point of emphasis for the team, and that will continue this year. If the offense can bounce back from last year’s disappointing 17th place in Offensive Rating (lowest since 1996-97), it’ll matter, and they’ll compete for home court. If they can’t, it won’t, even if they’re the best rebounding team in the league.