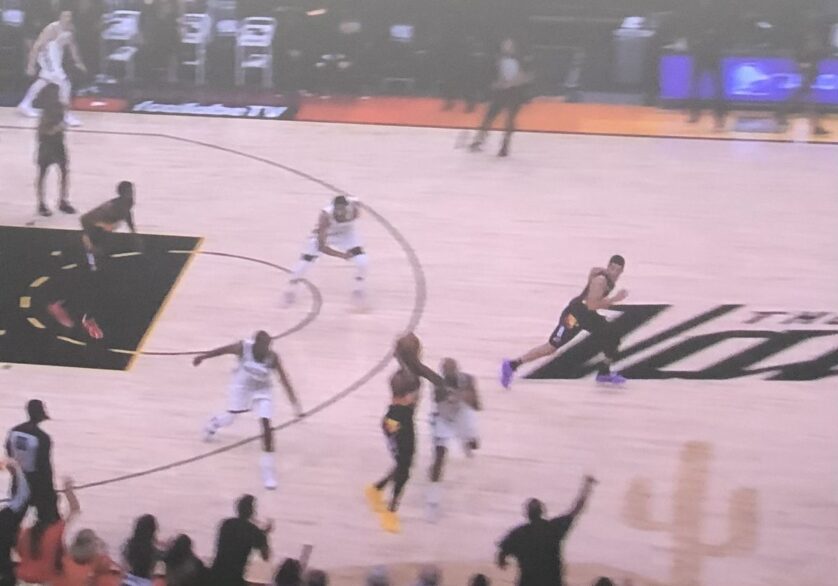 People are rightfully praising Jrue Holiday for his strip of Devin Booker at end of the Game Five. That strip prevented the Suns from possibly scoring the go-ahead basket with less that 17 seconds left, and led to a break culminating in a perfect lob pass from Holiday to Giannis Antetokoumpo for a dunk, giving the Bucks a three-point lead. After bricking the “and-one” free throw that would have sealed the game, Giannis Antetokounmpo smartly tapped the rebound back to Khris Middleton — a much better outcome than Giannis grabbing the rebound himself and having to shoot more free throws. Middleton then gave Bucks’ fans some palpitations by missing the first free throw before swishing the second, effectively clinching crucial Game Five.

So just like the end of Game Four with The Block on Deandre Ayton, the Bucks won a game with an incredible defensive stop instead of the “usual” way of making a key basket. In my Ode to Basketball piece from several years ago, one of the beautiful moments I described was such a stop:

“And, of course, the game winning play. The shot in the air as the buzzer sounds, the ball hits the net and secures the contest. Or a defensive team coming up with a final stop to preserve the narrow win. All followed by teammates being teammates, coming together, whether in celebration, or commiseration, since only one team can win.”

But I have also written many times that people focus too much on those end-of-game plays as if they “count more” than everything that happened in the previous 47 minutes. The expression I use is that basketball is not Double Jeopardy where the second half of the game counts twice as much as the first half — ”I’ll take Basketball Expressions for $200, Alex.” I want to focus on two things that happened earlier in the game that also contributed mightily to the Bucks’ win.

The first was not a moment, or a single play, but a four-minute stretch to start the second period. That stretch was so crucial because of what had just happened in the first quarter. Put simply, the Suns had crushed the Bucks in the first 12 minutes. The Suns went 14 for 19 from the floor, barely turned the ball over, and played excellent defense on the Bucks without fouling, holding the Bucks to only 21 points. As a result, the Suns had a huge 16 point lead, 37-21, and the Bucks best perimeter defender, Holiday, had two fouls.

Think about the predicament facing the Bucks. They were on the road against an excellent team that barely loses at home, down 16. And the Suns had the ball to start the second quarter. Unless the Bucks turned things around, they were in danger of getting blown out and going down 3-2 in the Finals, needing to win Game Six AND come back to Phoenix to win Game Seven. The Suns were on the cusp of becoming prohibitive favorites to win their first NBA title.

We know now that the Bucks did not fold, and instead came back from that huge deficit to win Game Five. This made the Bucks prohibitive favorites instead of the Suns. The remarkable thing about the comeback is how quickly the Bucks wiped out that 16-point Suns’ lead. Normally in this situation, the team down 16 is hoping to cut the lead to single digits by halftime. The Bucks did not do that. Instead, they tied the game in barely over four minutes. Take a look at the play-by-play, starting at the beginning of the second quarter to see how they did it.

It took the Bucks only 4 minutes and 12 seconds to eliminate the entire 16 point deficit. During this stretch, the Suns went 2 for 11 overall and 1 for 6 from three and missed 4 straight three-pointers in the first 90 seconds of the quarter — plus a turnover. While the Suns were putting on a brick-fest, the Bucks made their first 8 shots, including all 3 of their three-points. That, my friend, is a perfect recipe for turning around a big lead in a short period of time. All of this occurred with both Giannis and Devin Booker on the bench. This four-minute stretch changed the course of the game, and may be the biggest reason the Milwaukee Bucks could win this series, and their first NBA title in 50 years.

Now let’s look at one other key play, one that previewed the Holiday-Booker strip with 17 seconds left. The same two players were involved. In the third quarter, Booker was dribbling the ball against Holiday’s usual stout defense near half-court. Holiday cut off Booker’s path, knocked the dribble away, and retrieved the loose ball. But he wasn’t done. Instead, Holiday dribbled the ball up court and drilled a step back three pointer from the left wing, stretching the Bucks lead from five points to eight — 83-75. And that steal and three pointer were just as valuable to the ultimate outcome as Holiday’s strip and lob to Giannis in the game’s last moments.