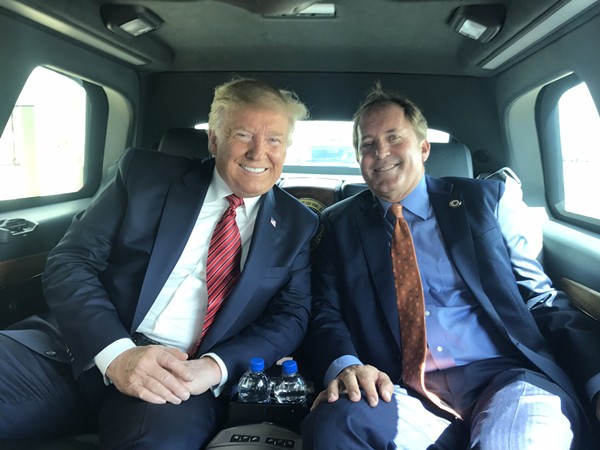 In a May 21 letter, Paxton asked the Trump administration to revoke millions in CARES Act pandemic relief funding that Harris County planned to use to facilitate mail-in voting during the pandemic. The correspondence was obtained and shared online by watchdog group Citizens for Responsibility and Ethics in Washington (CREW).

The request by Paxton — a co-chair of the group Lawyers for Trump — came as Texas Democrats and Republicans squared off in the courts over voting by mail during the public health crisis. It also occurred as President Trump repeatedly and falsely claimed that mail-in voting would cause widespread election fraud.

In his letter, Paxton argued that it was illegal to use COVID-19 relief funds for mail-in ballots and that the White House should rescind any funding Harris County used for that purpose. Harris County is home to Houston, the state’s most-populous city.

“Without implementing adequate protections against unlawful abuse of mail-in ballots, the Department could be cast in a position of involuntarily facilitating election fraud,” Paxton wrote.

Not surprisingly, the AG never publicized the letter to his constituents, according to CREW’s report.

Harris County Judge Lina Hidalgo, a Democrat, blasted Paxton’s effort to strip relief money from the county for trying to protect the safety of its citizens as they cast ballots.

“Taking emergency relief funds from the people of Harris County would have knocked the floor out of our citizens’ ability to vote safely during a pandemic and an important national election,” Hidalgo told the Texas Tribune. “This attempt to cut off emergency federal funding for fellow Texans is indefensible.”