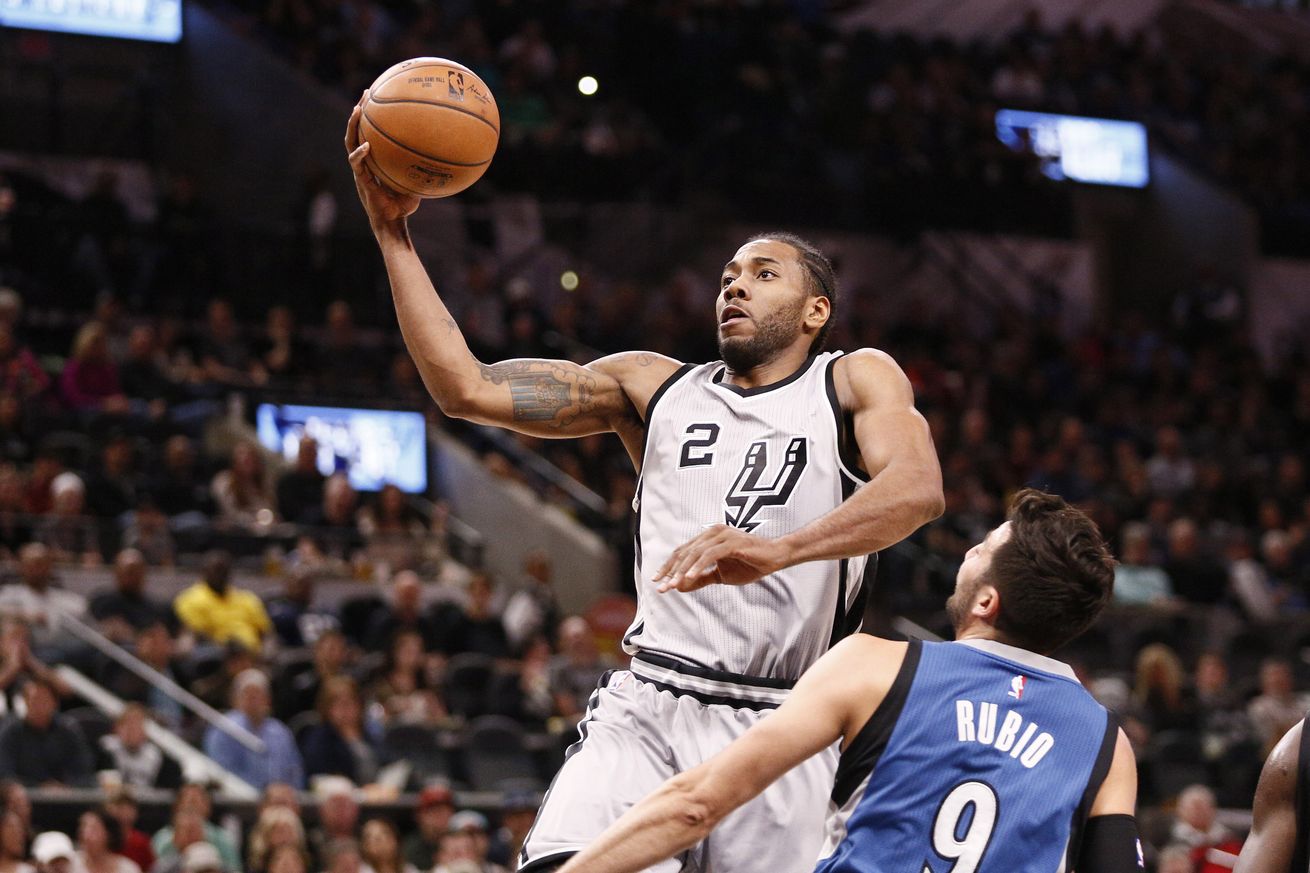 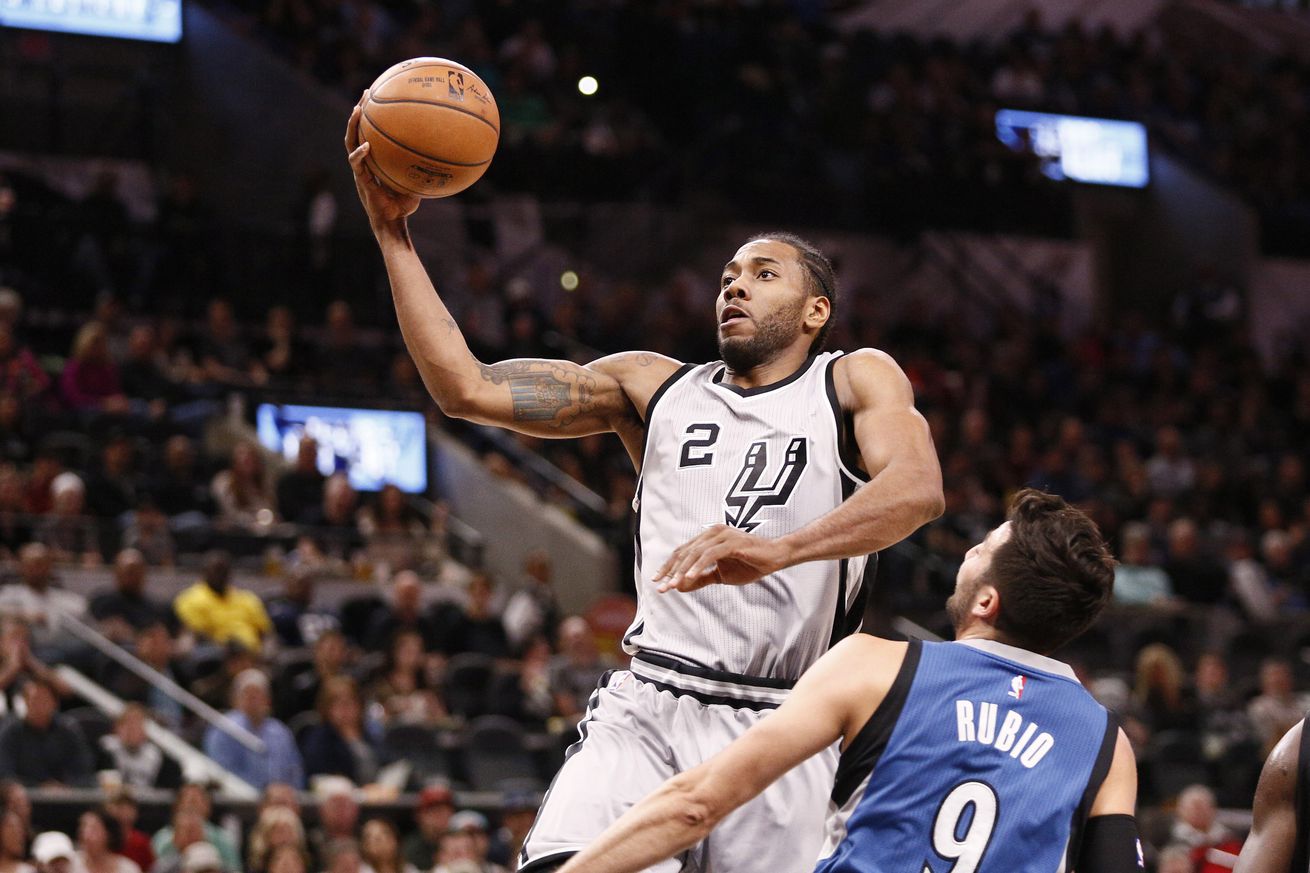 The Spurs are the hottest team in the NBA, clinch their 20th-straight playoff berth and are on the Warriors’ heels for the one-seed.

The Spurs clinched their 20th-straight playoff berth with their 97-90 overtime win against the visiting Minnesota Timberwolves on Saturday night. How about a little perspective on that?

This is what Kawhi Leonard looked like the last time the Spurs missed the playoffs.

Now, I’m not sure if that’s completely accurate but you get the point.

With the berth the Spurs have tied the 1984-2003 Utah Jazz for the third longest playoff-appearance streak in NBA history. They trail the 1984-2003 Trail Blazers (21 seasons) and the 1950-1971 Nationals/76ers franchise (22 seasons). With Kawhi locked up for another two seasons and Popovich probably not calling it quits until after the 2020 Olympics I think the 76ers record is in real danger of at least being equalled.

Back to the game played. It was the second overtime game in as many nights for San Antonio, who eked out a 101-98 win over the Pelicans in New Orleans on Friday night.

Two overtime wins on a back-to-back came at a cost, however, as Kawhi Leonard and LaMarcus Aldridge both played about 84 minutes each over the two games. But with Kevin Durant’s injury and the overall one-seed certainly in play (the Spurs are just two games back of the Warriors) it was a price that Gregg Popovich was willing to pay.

One aside: I think Extraneous G wants the top seed and I think it would benefit the team to make a play for it. It doesn’t make sense to me to for the Spurs to try to avoid any particular team. Home court matters and you play the teams that come to you.

The game started off a bit rough for the Silver and Black as they struggled to put points on the board and found themselves down 22-11 with a minute and a half left to play in the first quarter. It would get worse for the home team, who found themselves down 41-25 five minutes into the second quarter and again trailed by 16 with less than a minute to play in the first half.

San Antonio looked fatigued and Minnesota looked like a well-rested team that had won 14 of their last 24 as they make a push for the eight-seed. The Spurs managed to cut it to 12 going into the break but it looked like the Timberwolves’ night as the Spurs hit just 40% of their shots and scored just 43 points while giving up 55 to the Wolves on 47% shooting. The Spurs also lost the rebounding battle 28-18.

The second half wasn’t a pretty offensive performance for SA but their defense tightened up and slowly the team was able to chip away at their deficit. The Spurs held Minnesota to just nine field goals in the third and fourth quarters combined and just 29% shooting. They also won the rebounding battle 26-23, including eight offensive boards.

At the end of the third quarter the Spurs had cut the Wolves’ lead to just five but Nemanja Bjelica hit a three right before the buzzer to make it a relatively daunting eight-point deficit going into the fourth.

I just want to toss this in even though Dejounte Murray played just four minutes in the game and scored only this one bucket. He was a plus-six in his time on the floor. Just for the smiles.

The good guys kept chipping away in the fourth and took their first lead of the game with 2:45 to play in regulation on a Kawhi jumper.

Kawhi gives us the lead! pic.twitter.com/XmPEz5MWmd

Overtime belonged to the Silver and Black, who outscored the young Timberwolves 14-7 behind six from Whi and five from Pau Gasol, who finished the game with a 17-8-3 line off of the bench. He’s been great since coming back from breaking his hand.

It’s a tough loss for the Wolves, who are playing well and still have a chance at a playoff appearance, and you have to feel for them. But credit the Spurs for sticking with it and playing out the game. A 16-point comeback is a good sign for the team, even in an ugly win.

Your Spurs improve to 48-13 and it’s certainly safe to say that they’ll win 50 games for the 18th-straight season. If this is the the last season of that streak, which honestly seems unlikely, it will be 2031 before another team can hope to break the record. At this point it seems hard to imagine that their record will ever be broken.

The Spurs stay at home and will host the Houston Rockets on Monday night. The Spurs have a five-game lead over the third-seeded Rockets as well as a six-game lead in the loss column. It should be a good game and perhaps a playoff preview.