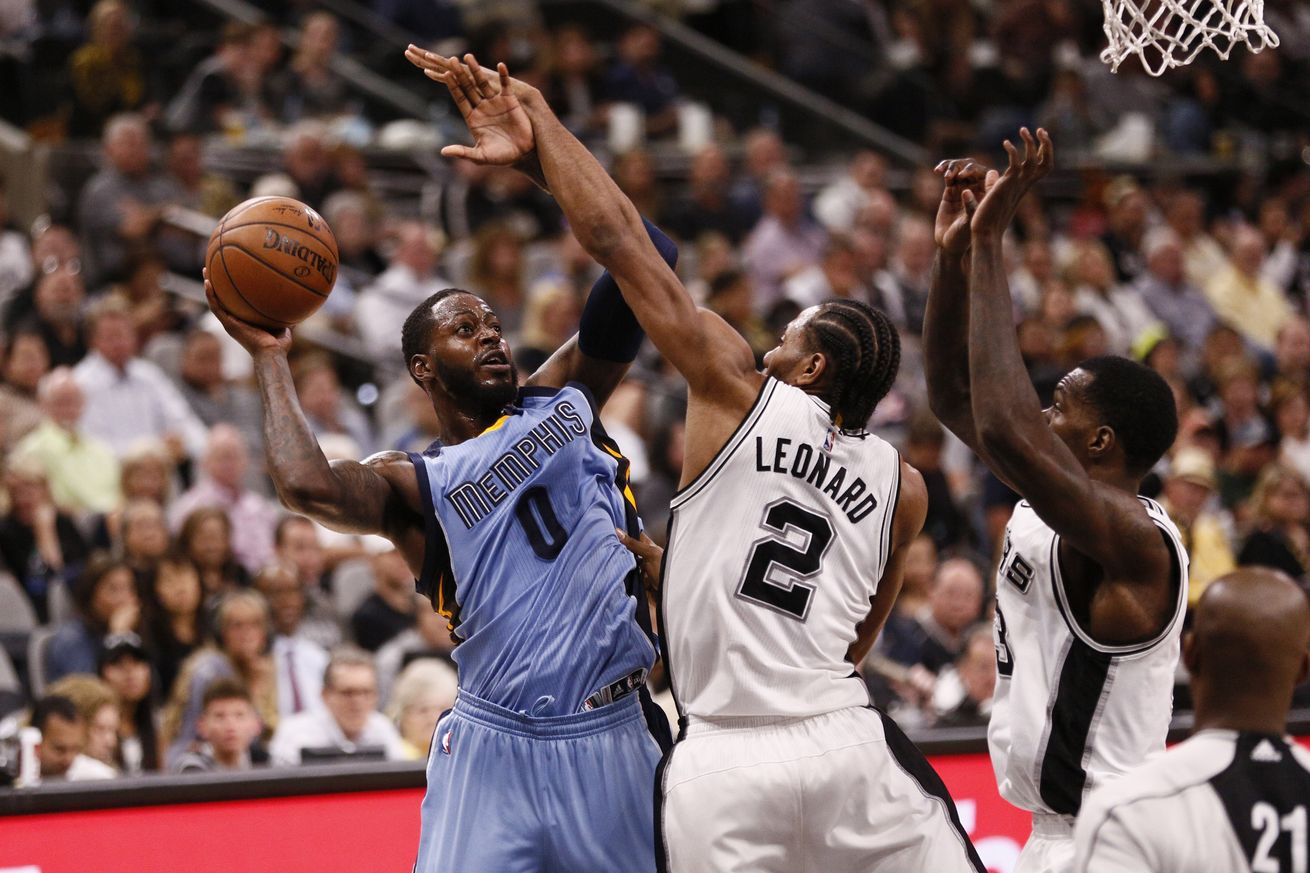 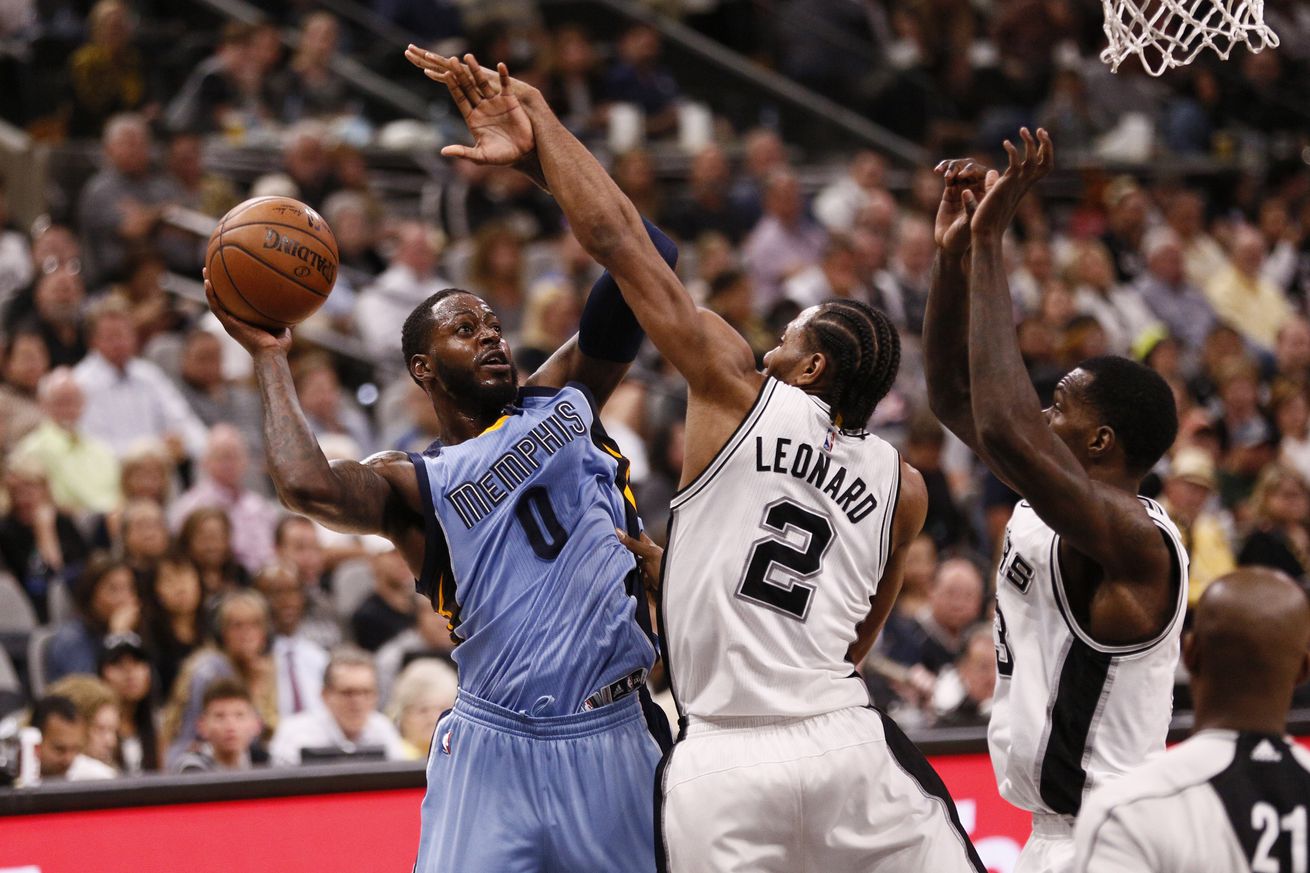 It looks like we’ve got our first-round matchup all set. Who’s excited?

San Antonio’s win over Memphis on Tuesday night pretty much locked Memphis into the seventh seed and a first-round showdown with the Spurs. I mean, that’s pretty good for the Spurs in that I don’t think that Memphis can do more than make it a five-game series. But man, it sure it hard to watch when these teams play each other and maybe it’s just me, but I’ve seen enough Spurs-Grizzlies games to last a few more years.

So get ready for an ugly series in a week and a half. Though San Antonio is a bad matchup for the Grizz, Memphis is capable of making it a tough, less-than-pleasurable series of games. SA has swept Memphis the last two times the teams met in the playoffs (2013, 2016).

The teams split the season series 2-2 with SA winning the last two games of the season.

This one started off with the lowest scoring first quarter of the season for the Spurs with the teams combining for just 30 points (previous low was 31 against the Grizz in February) with the Grizz taking a 16-14 lead after the first twelve minutes of play. That was after the Spurs took a 14-6 lead with six and a half minutes left in the quarter.

The second quarter ended where the first left off, with the Grizzlies hitting a triple to make it a five-point game and San Antonio going scoreless for the first two and a half minutes of the period. Yes, that adds up to nine minutes of game where the Spurs were scoreless. Nine minutes. And they only trailed by five. That’s how ugly this was.

The teams combined for 35 points in the second quarter with the Grizz taking a 35-33 lead into the break. That was a season-low for Spurs opponents points in the first half and they were still losing. The playoff series could very well be the longest five-game series in the history of the league.

The fourth quarter was fairly exciting with the teams dropping 57 points, though the Spurs did give up an 11-point lead they held at the six-and-a-half-minute mark. Memphis came back to take a one-point lead on a Troy Daniels triple with 1:12 to play, part of a 14-2 run for Memphis. Then the game went back and forth for the rest of regulation.

Leonard got to the line and put the Spurs back up one before Marc Gasol responded with a jumper to put the Grizz back up one. Wade Baldwin then split a pair of freebies to put the Grizz up two with 14 seconds left. This is where I was sure that Popovich would give the ball to Leonard and tell him to shoot a three, to either win or lose the game. I still can’t believe Pop played for overtime at this point in the Spurs’ season.

I was half wrong. Pop did go to Kawhi but he didn’t shoot a three, instead hitting a step-back midrange jumper to tie the game with five seconds left to play.

Kawhi you so clutch?! pic.twitter.com/zFFxwDdStU

That left plenty of time for Memphis to get a game-winner and put this one to bed. That’s when the Grizzlies executed a great play to get Zach Randolph open for a jumper. In fact, it was so well executed that they left two and a half seconds on the clock for the Spurs.

That was more than enough time for this to happen.

Overtime belonged to the Spurs, who outscored Memphis 11-5, and after back-to-back triples from Patty Mills and Gasol this one was as good as over.

And so the Spurs get their seventh 60-win season in franchise history, good for third best all-time, and improve to 60-17.

The Spurs finish up their only home back-to-back of the season when they host the Lakers on Wednesday night. With nothing left to play for in the season, expect to see lots of rest for the Silver and Black for the rest of the season.