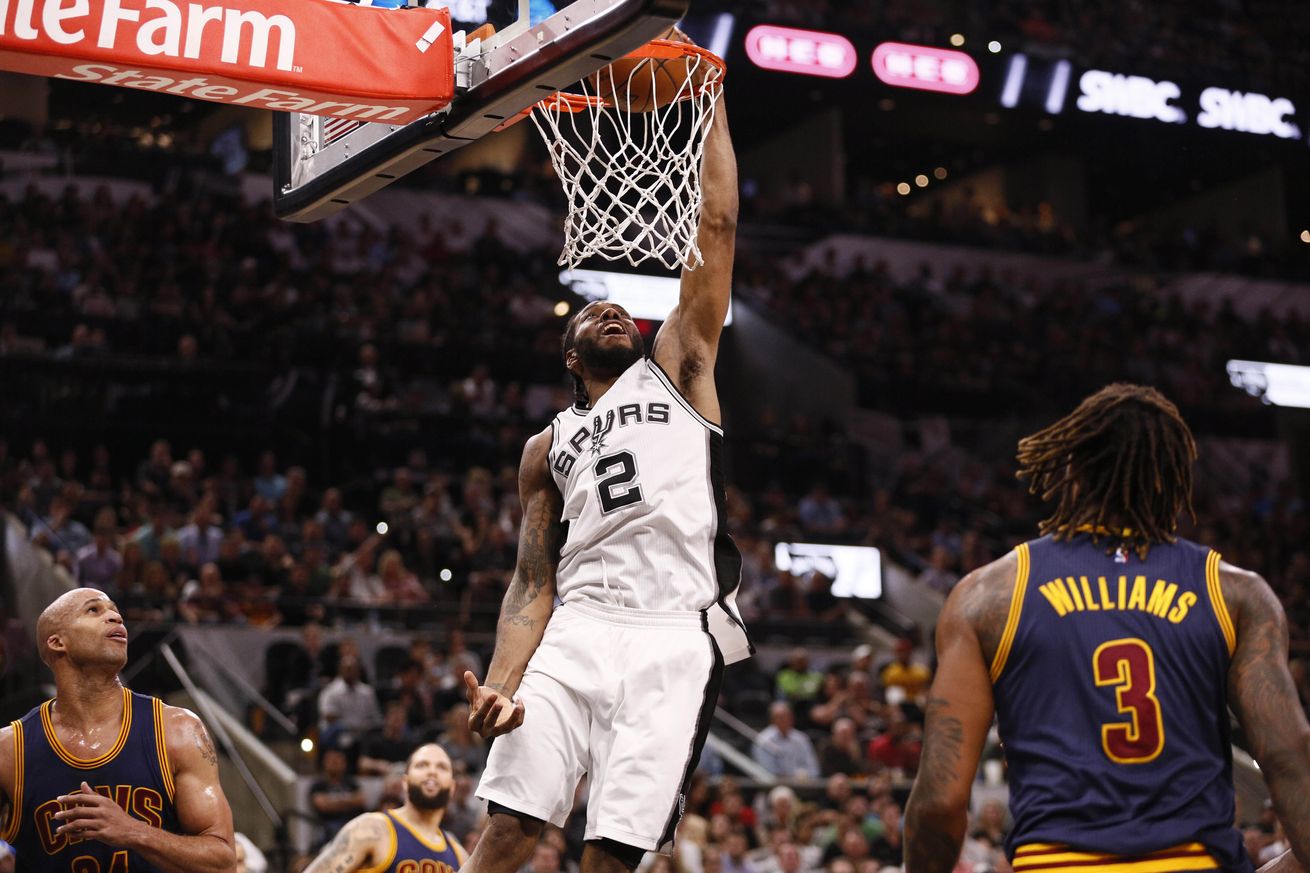 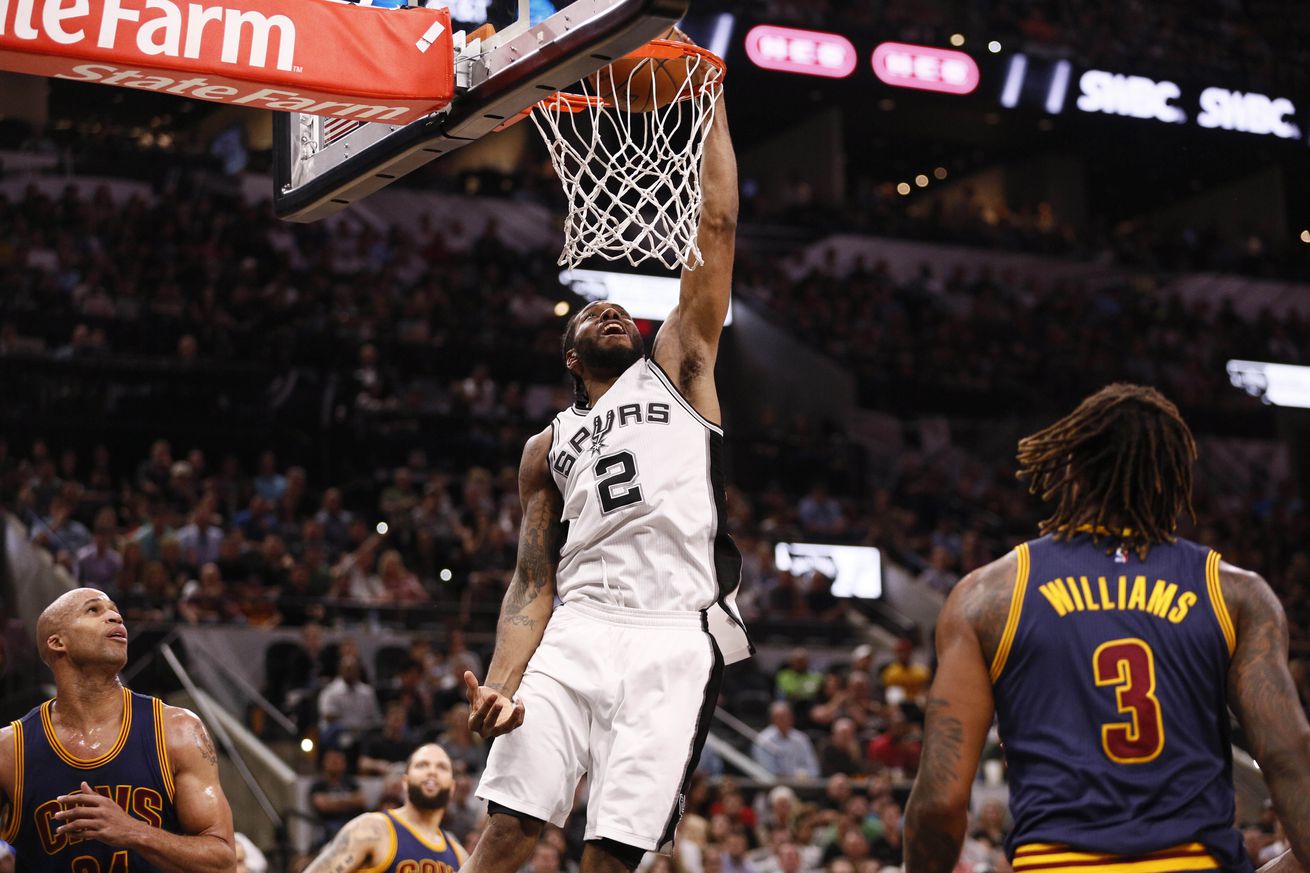 The Spurs are undefeated (4-0) against the Warriors and Cavaliers this season.

Well that was a fun game. If you’re a Spurs fan that is. For fans of competitive, exciting games, this one fell well short as the Spurs dominated the Cavaliers for most of the game and finished the season-sweep with a 103-74 win in San Antonio.

It was a strong performance from San Antonio, one that Manu Ginobili said might have been the team’s best of the season, on both ends of the floor but it was the Spurs’ defense that really stood out on Monday night.

San Antonio held the Cavaliers to a season-low 74 points on 37% shooting. The loss also knocked the Cavs out of the East’s top-spot, now occupied by the Boston Celtics. It gets worse for Cleveland, who now have a minus-2.8 net-rating since the all-star break. That’s bad. Very bad. In fact, it’s only good for 21st in the league in that time (they’ve also been the second worst defensive team in the same span) and they’ve gone just 8-10 over the stretch.

They have just nine games left to play this season and it seems a little unlikely that they’ll be able to just turn in on come the playoffs. For most of the season it seemed like the Cavs would inevitably emerge from the East to take on whoever won the West but right now it really seems like Toronto, Boston or Washington have at least a shot at pulling off what until recently would have to have been considered a huge upset.

To be a little fair to Cleveland, they were without Kyle Korver and Iman Shumpert on Monday night, but it’s hard to imagine that having them available would have changed much for the Cavs.

So with that said, I’m not sure what to take away from this game from the Spurs’ perspective. They came out focused and played hard defensively and were pretty good, if not great, offensively. While they were in fact playing the defending champs, the Cavs team on Monday sure didn’t look the part.

The first quarter and a half of the game was competitive enough, with the Spurs leading by 10 after one and the Cavs keeping it around there for another half a quarter. LeBron James even cut it to eight after an out-of-bounds play where Kawhi Leonard was whistled for a foul and James completed an and-one. There’s no question that Kawhi fouled James but Gregg Popovich took issue with James being awarded the basket as it appeared that the foul took place before what could be a continuation.

That’s when Pop picked up his ninth tech of the season.

Kyle Anderson got some run around that point and was pretty good in his time on the floor. After the game, Popovich gave the kid some praise, saying, “I really enjoyed watching him play tonight. He was really solid at both ends of the court. And against a good basketball team, for a young kid like that, to play that way, it was fun to see.”

Anderson toys with the CLE defense in transition. He makes this basket possible before he even passes the ball. pic.twitter.com/lpqCaXbEp7

when you’re feeling it pic.twitter.com/D4UkGkUHsh

The rest of the first half was all Spurs as they ran up a 64-40 advantage at the break on a number of highlight-worthy plays on both ends.

Some serious defense from the Spurs forcing the shot clock violation from Cleveland. pic.twitter.com/bytrwmYt0p

Perhaps my favorite of which was this sweet alley-oop from Patty Mills to Manu, though the Kawhi buzzer-beater is right there with it.

As pretty a fast break bucket as ever you’ll see: KL to Patty to Manu for a gorgeous reverse layup. #StillManu pic.twitter.com/UtkK50Eddz

And the 10-of-10-on-the-difficulty-scale buzzer-beater from Whi.

That was it for the Cavs, though they did manage to hold SA to just 17 points in the third quarter, the Spurs returned the favor and held the Cavs to just 18. Cleveland’s 58 through three quarters was the lowest opponent total after three quarters all season for SA.

With less than a minute left to play in the third, LeBron James took an inadvertent elbow to the back of the neck from David Lee and left the game for good. He made it to halfcourt before collapsing to the floor near the scorer’s table for a couple of minutes. He did seem okay and didn’t head to the locker room. Hopefully it’s nothing that lasts.

David Lee with a bow to the back of LeBron James #GoSpursGo #TheLand pic.twitter.com/AM4nZPSGdr

The fourth quarter was garbage time, with the Spurs opening up a 33-point lead at one point.

It was a good win for the good guys, don’t get me wrong, but I’m not sure that it’s as good as it looks on paper. Sure they destroyed the defending champs, but let’s see how the Spurs fare on Wednesday against the Warriors. Kevin Durant or not, the Warriors have been pretty good lately and will be a decent test for SA as the regular season winds down.

Your Spurs improve to 57-16 for the season. With a win against the Warriors on Wednesday they’ll be just one game back of the one-seed, which is certainly still in play.

The Spurs get a night off before they finish up their homestand on Wednesday night against the Warriors. If there’s any hope for the Spurs and the one-seed, they’ll have to win that one. The Warriors will be on the second night of a back-to-back, but they’re expected to have everyone available except KD. The Spurs will follow the game against the Warriors with a trip to OKC on Friday and then will be back home to host the Jazz for a Sunday afternoon tilt to finish the week.