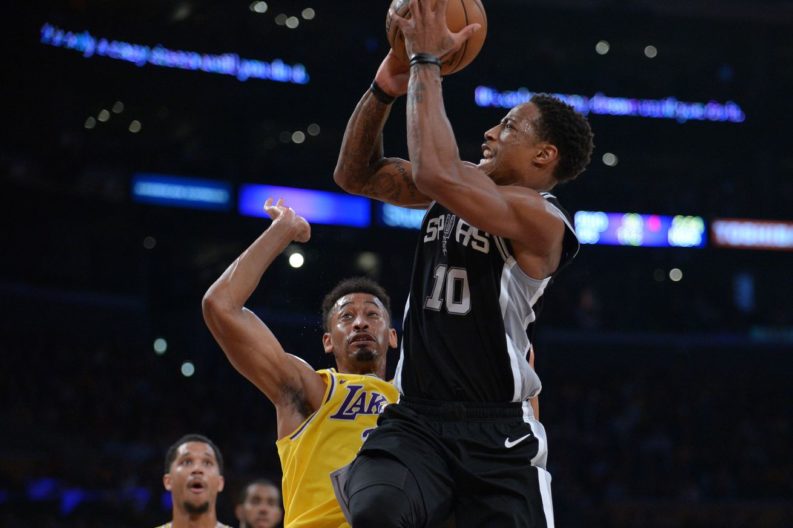 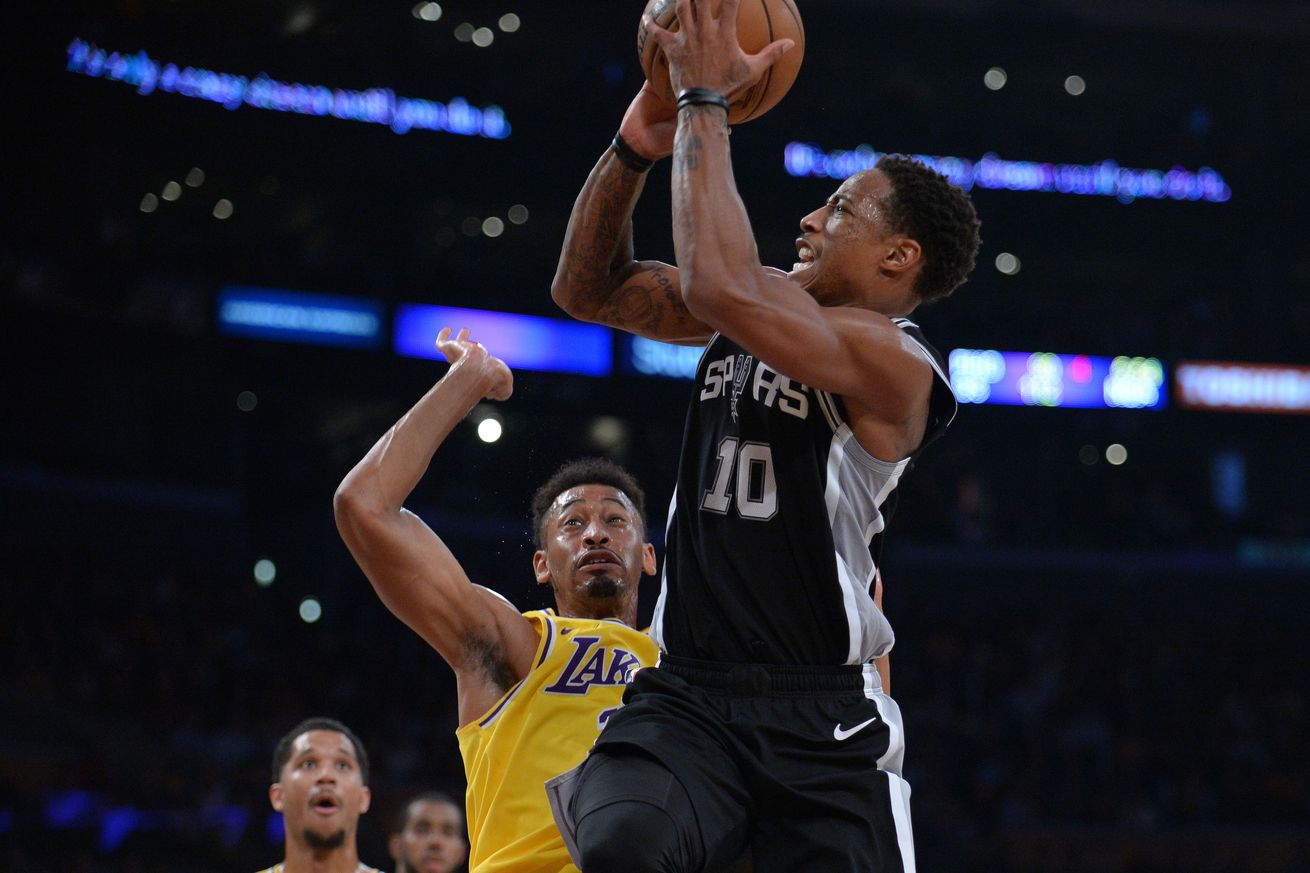 The Spurs win their first road game since defeating LeBron in Cleveland back on February 25th, but it was worth the wait.

Both the San Antonio Spurs and Los Angeles Lakers entered tonight’s game short-handed. While the Spurs have battled the injury bug early in the season, the Lakers battled other teams. Literally. Both Brandon Ingram and Rajon Rondo were suspended for multiple games after throwing punches at Houston players toward the end of their Sunday game versus the Rockets.

The Spurs’ road woes are well-documented by now. Apparently LeBron James is the cure, as the Spurs hadn’t won a game on the road since defeating James and the Cavaliers back on February 25th. The issue last season seemed to be late game execution, and those same issues showed up again tonight. The Spurs were up 128-120 with just over a minute to go, but the Lakers went on an 8-0 run, sending the game into overtime. The Spurs got revenge in overtime, overcoming a six point deficit with under a minute to go. James missed a highly-contested jumper at the end of overtime, securing a one point victory for the Spurs. The Spurs are now 2-1 on the season and head back to San Antonio for a game against the Indiana Pacers on Wednesday.

Dante Cunningham replaced Jakob Poeltl in the starting lineup with the hopes that he would be able to slow down LeBron James. Nobody can truly slow down LeBron, but Cunningham had as good a shot as anybody else on the Spurs roster. Although, Rudy Gay offered assistance.

Rudy Gay comes away with the nice rejection on LeBron! #GoSpursGo pic.twitter.com/zHgyK0DEg5

The Spurs came out swinging in the first quarter, putting up a ridiculous 42 points on 70% shooting from the floor. Eight different Spurs scored in the quarter, paced by DeMar DeRozan’s ten points on a perfect 5 for 5 shooting. Do large first quarter leads ever result in a blowout win? I can’t remember the last time it happened, and it certainly didn’t happen tonight. The Spurs had opened up an 18 point lead midway through the first quarter, but by midway through the second quarter, that lead had been reduced to one. Every time the Lakers thought about taking a lead, the Spurs responded. The Spurs ended a shaky second quarter up 65-60.

After a relatively quiet first half, Aldridge looked more aggressive in the second half. His aggression hit an all-time high once Ivica Zubac entered the game for the first time this season. LaSharkus smelled fresh blood and the Spurs made it a point to run the offense through Aldridge, with LMA backing Zubac down with relative ease and finding open shooters on the perimeter. Zubac picked up an impressive five fouls in five minutes and was never heard from again. The Lakers continued to claw their way into the game, but Davis Bertans hit a three pointer at the end of the third quarter to put the Spurs up by three points heading into the final frame.

The fourth quarter was much of the same, with high-powered offense and little-to-no defense. With ten minutes to go in regulation, the Lakers took their first lead since 3-2. There would be another eight lead changes over the course of three minutes. DeRozan had an incredible game for the Spurs, but he struggled down the stretch, settling for those dreaded long 2s or driving into traffic, resulting in a couple turnovers and missed baskets. He did have what could have been the game-clinching assist, driving to the paint and dishing it out to a wide open Gay in the corner. Had that shot fallen, the Spurs would have gone up nine with only 40 seconds left on the clock. Unfortunately, Gay chose to have his first miss of the night be at the least opportune moment of the game.

Josh Hart hit a clutch three pointer to bring the Lakers within three points. After a Spurs miss, Rudy Gay made a huge mistake spacing LeBron with just a few seconds to go in the game and the Lakers down three. If LeBron wanted to go to the rim, Gay should have cleared the way. The one thing you cannot do in that situation is give James space to shoot, no matter how poor he’s been shooting thus far this season. He is LeBron James for a reason. It came as no surprise that he drilled the three pointer, tying the game with a few seconds left on the clock. After DeRozan missed a long jumper to win the game, the game went into overtime.

Aldridge got going again in overtime, getting JaVale McGee to foul out in the first possession of overtime. Despite Aldridge’s aggression, he went 3-6 from the free throw line, which could have proved to be extremely costly for the Spurs.

I am not the biggest Bryn Forbes supporter in the world. I truly believe he couldn’t guard a light post. With that being said, his ability to spread the floor has helped give both Aldridge and DeRozan space to operate in the half-court. The coaching staff clearly has confidence in Forbes, as the Spurs ran an ATO play for Forbes midway through overtime, and Forbes knocked down the shot without hesitation.

Forbes shot 4-8 from deep in the game and finished with 16 points. A wild sequence that must be seen to believe put the Lakers up by six with less than a minute to go. A Forbes layup followed by a Rudy Gay 3 pointer put the Spurs within one with 12 seconds to go. James missed both free throws, giving the Spurs a chance to win on the final possession of the game. Patty Mills was the next benefactor of an ATO play, and just like Forbes earlier in overtime, Mills knocked down a huge basket, giving the Spurs a 143-142 lead.

This bucket ended up being the game winning shot, as LeBron’s last-second jumper to win it for the Lakers bounced off the rim.

Despite another wonderful offensive effort from the Spurs, their inability to get stops on the defensive end is going to result in a lot of close, high-scoring affairs, similar to tonight’s game. This season is certainly going to be more exciting than last season, but just as stressful.

Up Next: Indiana Pacers in San Antonio on Wednesday, October 24

After the Silver and Black split two hard road games, some home support should help the team continue their progression.

For the opponent’s perspective, visit Silver Screen and Roll.