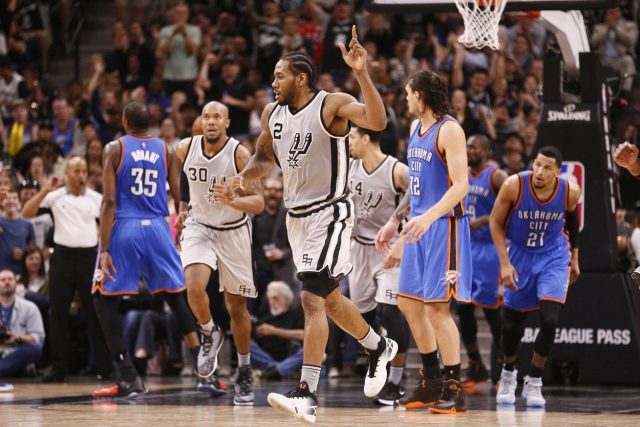 Oklahoma City earned passage to the second round of the playoffs on Monday night, though not without first withstanding the best shot of a depleted Dallas team. It’s not hyperbole to say the Mavs did all they could; injuries thinned out the lineup to the point it could barely function, and yet gutsy efforts up and down the roster ensured that it did. The ledger will show a series that ended in five games. The film will show that the Mavericks made up more ground on the Thunder than they reasonably should have.

It didn’t much matter in the grand scheme of the series, as OKC survived blunders and breakdowns to post a dominant margin of victory (+18.2). Their advantages were that severe. As the Thunder advance, however, they’re set to encounter an opponent that will be far less forgiving of their oversights. Dallas left so many points on the table (and conceded plenty to the Thunder) as a result of being hobbled and outclassed. San Antonio is in no way the same, a reality that will challenge Oklahoma City to find its leverage in different ways.

The stark differences begin with the first line of coverage. Try as Wesley Matthews did, his defense against Kevin Durant would always be limited by the seven-inch height difference between them. Raymond Felton, too, gave up size, strength and speed to Russell Westbrook, edges made apparent whenever Westbrook fired up the jets. San Antonio approaches those two crucial matchups with much more length at its disposal. Kawhi Leonard, the two-time reigningNBA Defensive Player of the Year, is as good a physical match (and as exhausting a technical opponent) for Durant as you’ll find. Danny Green can at least recover and contest against Westbrook with more room for error than any Maverick could, even if his cross-matched coverage is an imperfect solution. What matters most is taking away the express options of Durant and Westbrook shooting over the top of the defense or blowing by a defender without the aid of a screen. San Antonio won’t be as vulnerable in those ways, forcing OKC’s stars to earn every clean look they get………Read More

Source: Thunder knock out Mavericks, but the Spurs will be more daunting