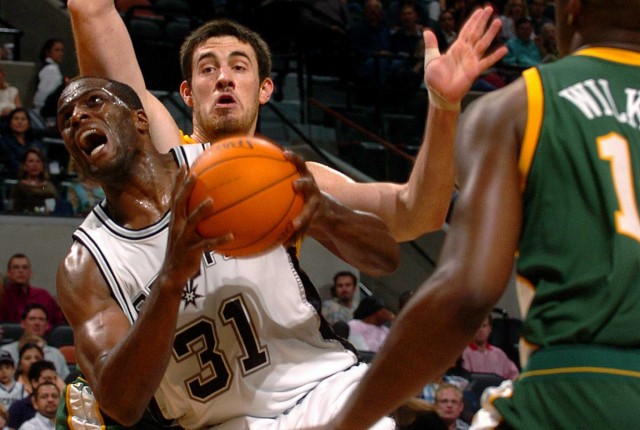 Malik Rose continues to write new chapters. Since he retired in 2009, Rose has worked as a pregame analyst for the New York Knicks. […] talk to the former Spurs forward for any length of time and it becomes clear Malik Jabari Rose’s heart is still in the Alamo City. Rose played 13 seasons in the NBA, seven-plus for the silver and black (1997-2005). A career backup, he rarely started, never was the best player, an All-Star or go-to guy. […] he was a fan favorite, one of the most popular players in franchise history. Rose’s best season came in 2002-03 when he averaged a career-high 10.4 points and 6.4 rebounds in 79 games, including 13 starts. The “Memorial Day Miracle” when Sean Elliott — dramatically straddling the sideline — sank a 3-pointer to beat the Portland Trail Blazers in Game 2 of the 1999 Western Conference finals at the Alamodome. Another prized memory, he said, came in 2003 during the team’s victory parade on the River Walk, courtesy of head coach Gregg Popovich. […] once you get to know Pop, he’s one of the most engaging and gracious people you’ll ever want to meet. Rose eventually was traded, going to the New York Knicks in a deadline-day deal in 2005 along with two first-round draft picks for Nazr Mohammed. The Spurs beat the Detroit Pistons that year in seven games to win their third NBA championship. Some fans, outraged that their favorite Spur had been traded, showed up at the Philly cheesesteak restaurant Rose opened in San Antonio to show their support. All in all, not bad for a player who went from blowing the tuba in the marching band at Philadelphia’s Overbrook High School — the same school that produced Wilt Chamberlain — to becoming a standout basketball and baseball player. Bright and articulate, Rose turned down an invitation to become an assistant coach under former Spurs teammate Avery Johnson at the University of Alabama before accepting an offer from former Spurs assistant Mike Budenholzer to join the Hawks. Rose, wife Tiffany, daughter Marley, 6, and son Miles, 5, live in Atlanta, where he’s fulfilling a dream of working for an NBA front office. Soon after he arrived in the Alamo City in 1997, he said his four brothers, sister, mother, two aunts and six cousins all followed him…..Read More