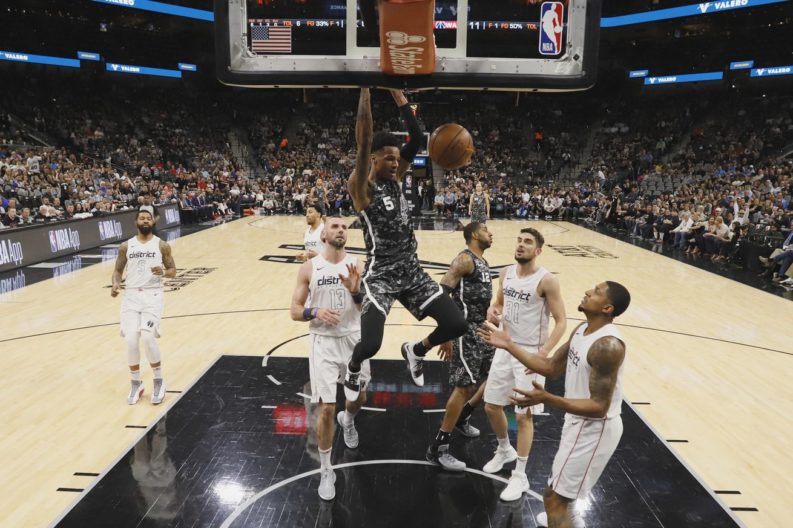 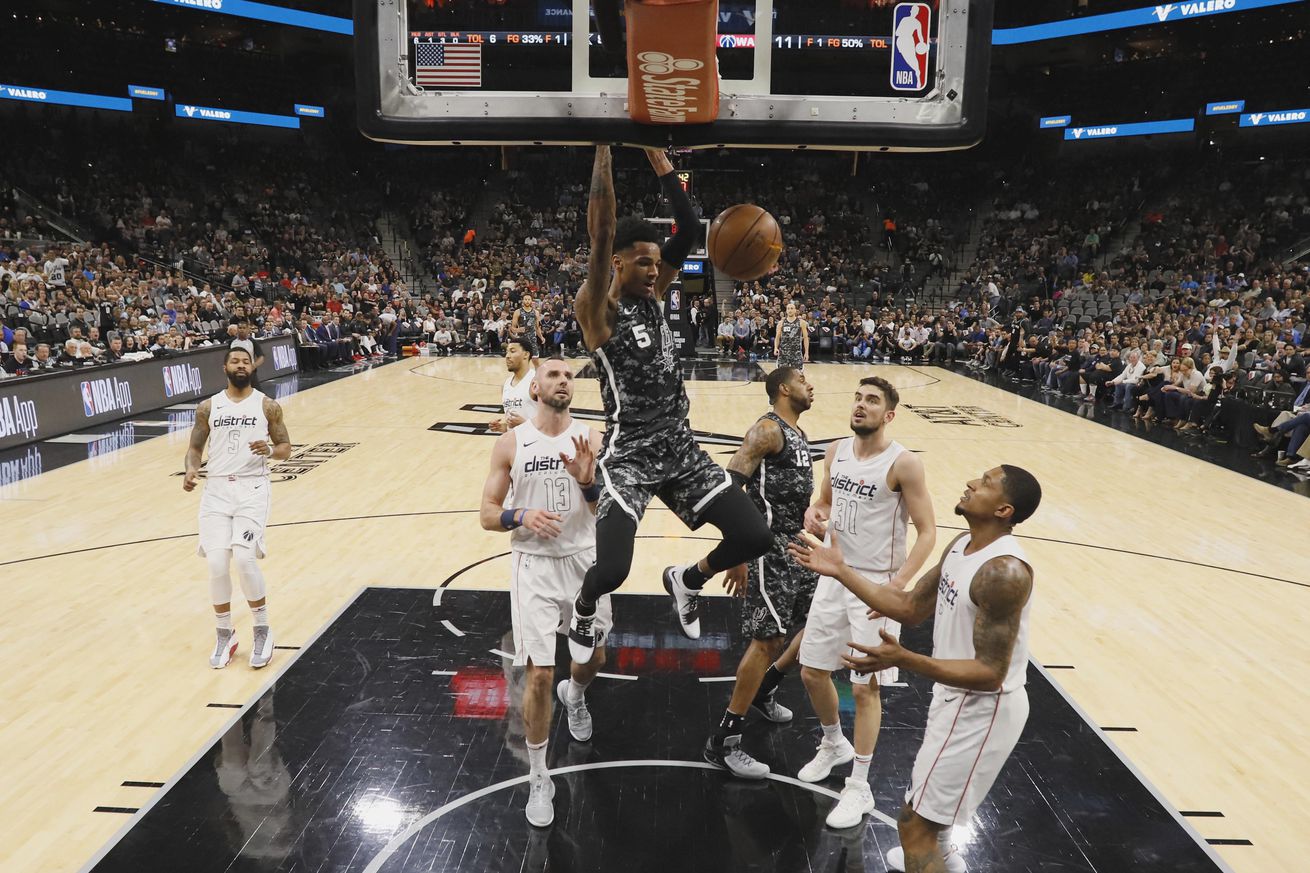 Behind LaMarcus Aldridge’s 27 points, the Spurs continue their timely upward trajectory, improving to 5-0 on their homestand.

Heading into the Spurs’ home tilt against the Wizards, the topic du jour was chemistry — specifically, the challenges of developing it with a currently-isolated element. In picking up the 98-90 victory, the team showed it was capable of working towards a new winning formula.

Leading the way again was the team’s rock in the middle, LaMarcus Aldridge, who snapped the Spurs’ opening four-and-a-half-minute dry spell with a jumper from the left block. It was from that trusted post that he would do much of his damage for the night, finishing with a game-high 27 points, nine rebounds, and four assists.

The All-Star has been a constant throughout this season, and it’s building around him that could allow the team to be successful into mid-April. The starting five remains the same over the past five wins — a promising sign given that we’ve seen 24 different combinations in 2017-18 — while Gregg Popovich tweaks the second unit and experiments with when he can deploy two-big lineups.

The chemical process of a Spurs season doesn’t typically begin in mid-March, but this has been anything but a typical Spurs season. A passing of the torch at point guard, plethora of injuries, and the inertia caused by Kawhi Leonard’s uncertain return have delayed the fusion we’re used to seeing down the stretch. Call it conditional acceptance or sobered resignation, but quotes like Ginobili’s on Wednesday suggest the team appears to be moving on without the specter of a late-season comeback.

What Aldridge is doing can be understated — often chalked up to a Spurs system that props up its featured player — but it shouldn’t be. In grinding Markieff Morris into a fine paste on the post, floating a half-dozen jumpers softly over the hopelessly outreached hands of Marcin Gortat, or simply bullying his way to an offensive rebound in a crowd, he showed again how uniquely unguardable he is in a league that has appeared to move on from players of his kind. He’s the rare big man that is forced to score on almost half of his own buckets — up from 40% last season, primarily due to the roster’s limitations — and is doing it at one of the most efficient rates of his career. That he’s done so while anchoring an elite defense (often as the only true big) and willing the Spurs towards a potential postseason berth is why his All-NBA case should only grow in these final weeks.

Aldridge received some offensive help from two unlikely sources on Wednesday, as Kyle Anderson (16 points) and Dejounte Murray (9 points, 10 rebounds), two players who often make an impact without scoring the ball, did their part. Most promising of all, perhaps: they both hit three-pointers in the corner, looks that they’re sure to get more of in the near future.

Not long ago, the Spurs found themselves in 10th place in the West, after suffering a precipitous tumble from third. They’re now winners of a season-best five straight and appearing to come together at just the right time.

The extra plays making the difference

The play below features three offensive rebounds — all by Dejounte Murray — which eventually bought the Spurs a trip to the free-throw line.

The work on the offensive glass (12 rebounds), effort under the basket (10 blocks), hustle to close out on Washington shooters, and the battle for a number of 50/50 balls helped the Spurs wrest and build on their lead through the middle quarters.

Every night being Manu Appreciation Night

Wednesday may have been all about honoring the troops, but it was the shades of sky blue that were once again prominent throughout the arena. More and more fans from Argentina (and all over really) continue to make the pilgrimage to watch number twenty in person:

After diving onto the floor for one and sneaking up on an unsuspecting Wizard for another, the Argentine is just one steal away from the Admiral’s all-time franchise record of 1,388.

As usual, Ginobili’s effort was off the charts on Wednesday. Here’s what another vet had to say about him, courtesy of the Express-News’ Tom Orsborn:

Pau Gasol’s shoulder still may not be right, Tony Parker can only occasionally turn the corner to get to his spots, and Manu Ginobili is so dedicated to sacrificing his forty-year-old body that it’s hard to know what he’ll have left at the end of some games. And yet, there’s something very cool in watching these three come off the bench together at the end of the first quarter and go to work, and it appears to be an element of the San Antonio rotation that we’ll see through the end of the season.

Over the Spurs’ five-game win streak, the trio of Gasol, Ginobili and Parker has played together for 52 minutes. They also comprise the team’s most-used non-Aldridge lineups in that span. With the starting unit looking set for the time being, it’ll be interesting to see who Pop runs with as the complementary pieces to this group. (Presumably, it’ll be Rudy Gay and someone else)

Pels won, so no movement in the standings for SA after Wednesday’s action. pic.twitter.com/jSABK8wykb