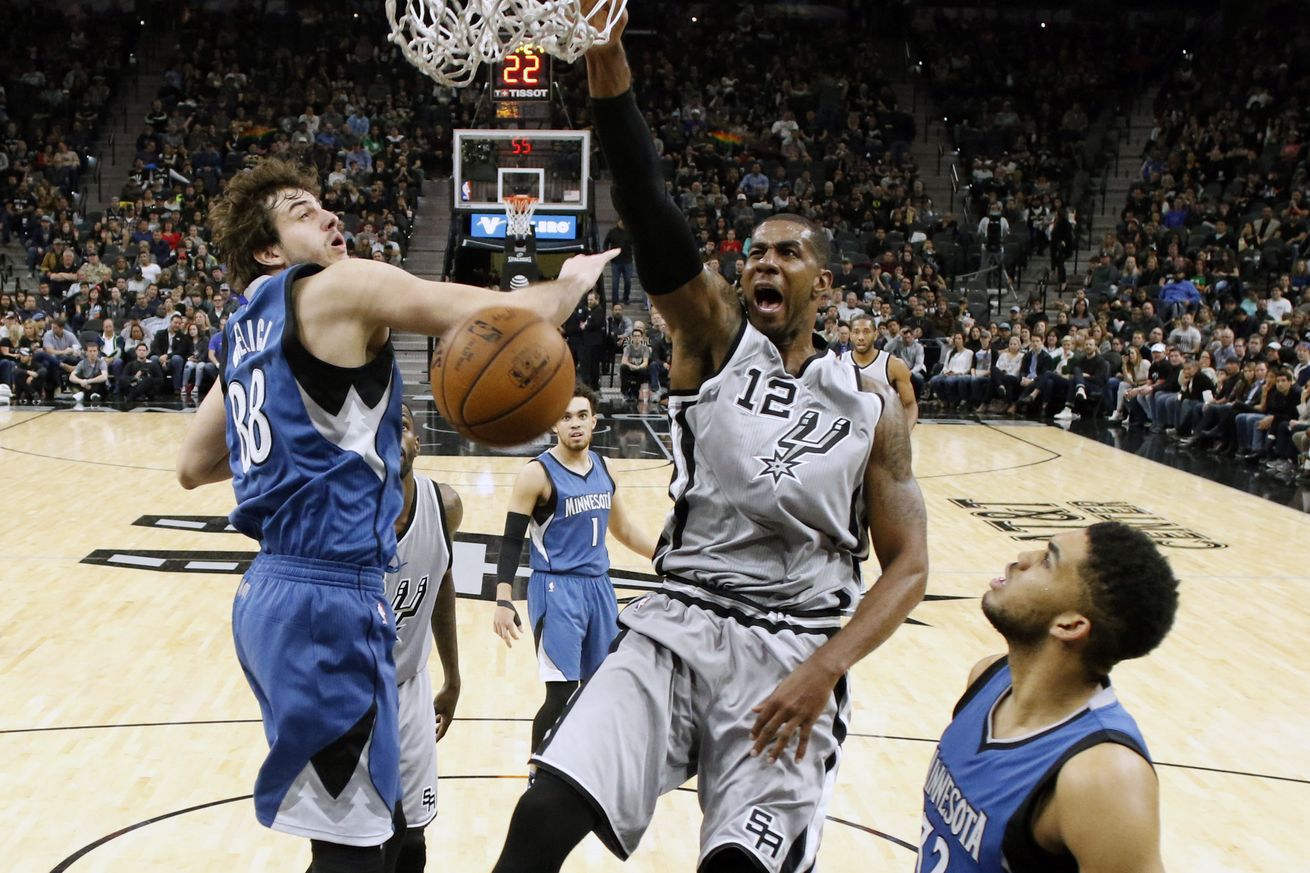 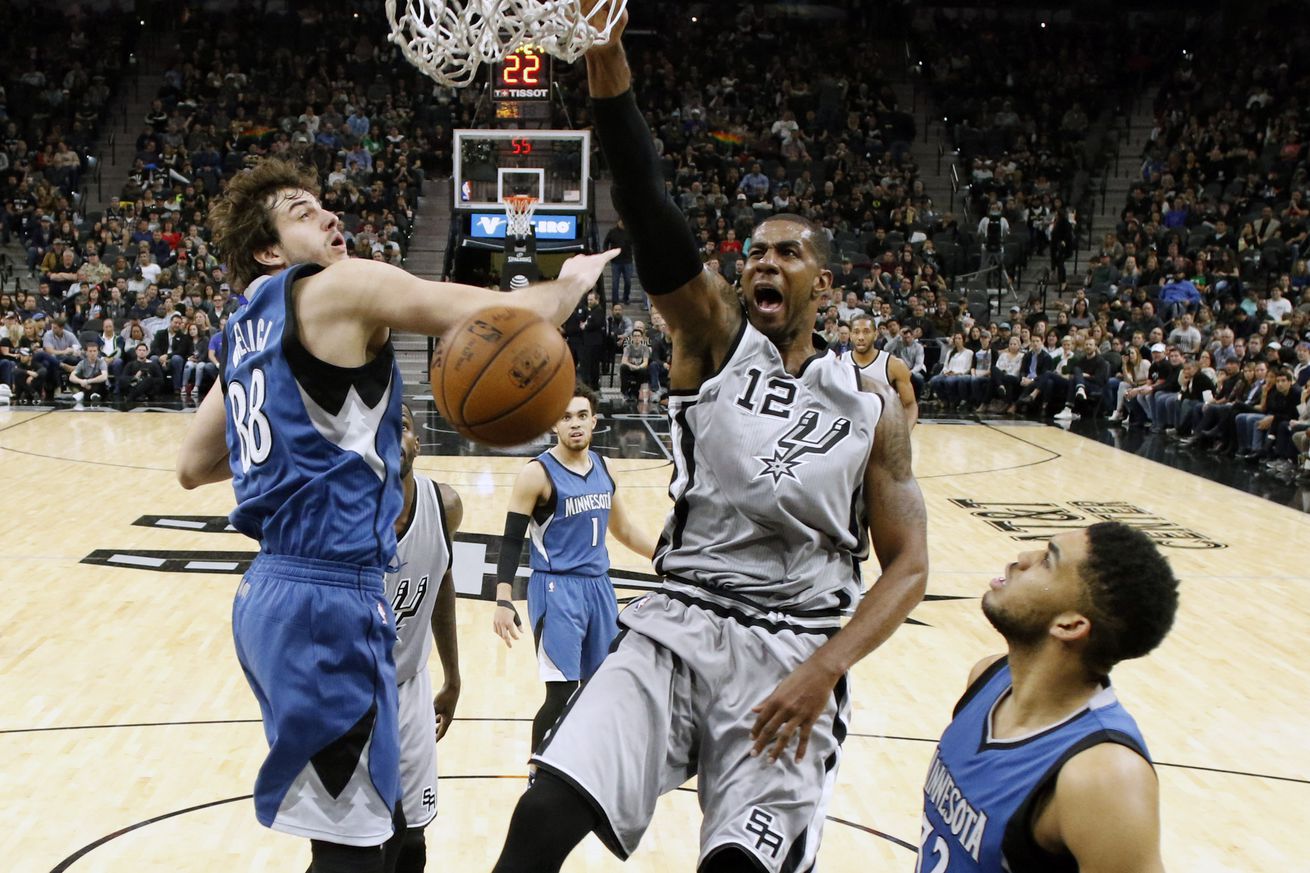 In back-to-back overtime victories against the Pelicans and T-Wolves, the Spurs preserve their chase for the 1-seed.

Kawhi Leonard loves basketball more than the rest of us, and I have the proof. Saturday night against the Minnesota Timberwolves, with the score knotted at 83-all, Kawhi had the ball in his hands with 15 seconds left on the clock. You or I might have decided to end the game right there, preserving the Spurs’ chase for the no. 1 seed in the Western Conference and avoiding a second straight overtime game. But Kawhi is different. He loves basketball, and he wanted to play an extra five minutes. So instead of rising up over Andrew Wiggins and winning the game, Kawhi hesitated just long enough that the horn sounded before the 17 footer left his fingers.

Allowing overtime was a dangerous proposition against a Timberwolves team that came in winners of 4 of their last 5 games. While Minnesota is one of the worst teams in the league record-wise in close games, there’s always fear of positive regression. On the flip side, the Spurs are one of the best teams in close games and had won their last two games by a total of four points. But sometimes trends hold serve, and Saturday night the Spurs escaped their second straight overtime game with a 97-90 comebacker in the AT&T Center.

To be blunt, a home win over a team currently in 11th place in the conference is never impressive, but I think the win against Minnesota deserves to be examined with a bit of nuance. The Timberwolves are better than their record, employ one of the league’s best coaches, two of its best young players in Karl-Anthony Towns and Andrew Wiggins, and even now sit only 3 games out of the 8th spot in the increasingly crowded Western Conference Middle Class. That the T-Pups held a 16 point lead midway through the fourth quarter was as much about the Spurs playing a putrid offensive half as it was about Minnesota playing up to the potential many observers predicted for them before the season began.

For the first 30 minutes of the game, the Timberwolves were getting easy shots, forcing the Spurs to run to spots on the floor where they had no plan of action, and controlling the tempo like a team full of veterans. In other words, a bunch of guys who can’t grow full beards flipped the script on the most disciplined team in the NBA. At halftime, Minnesota held a dozen point lead and Pop looked like he could shut things down as early as the third quarter if his team continued to wallow in their lethargy much longer. Quite simply, it was a game in which even an optimist like me struggled to see much hope for the Spurs.

One of the weird quirks of projecting results, especially those involving those of relative youth, is that the analyst can be correct in almost all of his or her thematic predictions and even many factual predictions, but still see the whole exercise thrown off by poor timing. For most of the season, the partnership of Towns and Wiggins has looked like anything but the next league superpower in waiting. But hidden underneath the layers of disappointing play, there is still perfectly valid potential.

Towns in still putting up Duncan-or-better statistical numbers in just his second season. Wiggins is still effortlessly putting up twenty point games and commanding the ball late against the reigning Defensive Player of the Year. Tom Thibodeau is still calling lots of timeouts to do his Scott Skiles impression. This time next season, the Wolves could be playing every night like they did in the first half on Saturday, and the prognosticators will say “Looks like we were off by one season on these guys. Chalk it up to arrested development.”

The Timberwolves are a team which calls 26 year old Ricky Rubio their elder statesman; when you’re dealing with this much youthful potential and projected greatness, the confidence interval can never be too generous.

So we’ve already thrown a couple of ingredients into our failure recipe, but let’s go ahead and scour the cupboard for more reasons why the Spurs should have lost this game. Not to be underestimated is the home-road-home factor, wherein the Spurs returned home to face the Pacers after a nearly month-long Rodeo Road Trip, came out flat, and barely won. This was followed two nights later by a road game in New Orleans’ Smoothie King Center, which is, as far as the Spurs are concerned, a building that’s historically been more haunted than San Antonio’s Menger Hotel.

Yet, by the grace of Louie Armstrong and Kawhi’s heavenly hands, they escaped that game as well. The next day, they come back to San Antonio having still barely unpacked from the Rodeo Trip to face a surging Minnesota team that hadn’t played since their 27 point road win over the fourth seeded Utah Jazz on Wednesday night.

Going into this game, Wolves had a defensive rating of 100.0 over their last seven games and that includes the 142 game to Houston.

Clearly, this was not your average Saturday night against a lottery team. And we’re not even done with the excuses, since the Spurs came out of New Orleans bricking free throws like the unholy offspring of Chris Dudley and Nick Anderson. They missed ten against the Pelicans and followed it up by missing another nine against the Timberwolves. Backing up from the basket didn’t seem to help, either. The Spurs shot 25% on three pointers against Minnesota, which was actually an improvement over the 22% they shot against New Orleans.

But as rousing (and exhausting) as it was to see the Spurs pull out OT wins over both these Western Conference wannabes, it was equally beneficial to the Spurs in big-picture terms. If you’re like me, you’ve been following two teams ever since the Kevin Durant injury. The loss of arguably Golden State’s best player has seemingly sent the West’s number 1 seed into a temporary tailspin, and allowed San Antonio to creep to within two games pending the Warriors’ Sunday matinee matchup with the hapless Knicks.

With two games left against the Warriors – both of them in SA – the Spurs closer to sitting in the driver’s seat than they’ve been since the last regular season game of 2015. But wins like these last three, against mid-tier teams fighting for playoff spots, will play as big a role in deciding the Spurs’ playoff seeding as those two high-profile matchups against the KD-free Warriors.

There’s another positive too. As mentioned, the Wolves are currently outside the playoff picture, and the Pelicans are a game behind the Wolves. Should the Spurs manage to steal the 1 seed, these two OT wins could well play a role in assuring a more confidence-inducing first round matchup with Denver or Portland, rather than New Orleans or Minnesota.

Beating Anthony Davis and Karl Towns on back-to-back nights in the regular season is good, avoiding them in the playoffs would be even better.

QUOTE OF THE NIGHT

LA on rebounding, getting loose balls, playing D, aka dirty work: “As I’ve played longer & longer, you understand those are winning plays.”

The Spurs have now held 33 of their 61 opponents below 100 points this season.

Again, in a season where only two teams aren’t avg over 100.

Bob Myers says Manu Ginobili “should be called a superstar so much more than he has. … superstars are made in different ways.” #ssac

In four games off bench, Pau Gasol averaging 15.8 points, 7.8 rebounds in 25.8 mpg. More production in slightly less time than as a starter.

Gasol on coming off the bench: “What really matters is who finishes…I have no problem with the way things are right now.” #Spurs

Best thing about this photo is that LeBron looks totally engrossed and hooked by the book…even though he’s only just started reading it! pic.twitter.com/vBNToh1WuN

Holt: Duncan is retiring, Parker is dust, you have no real money to play with, and you draft 29th.. Make me a winner.