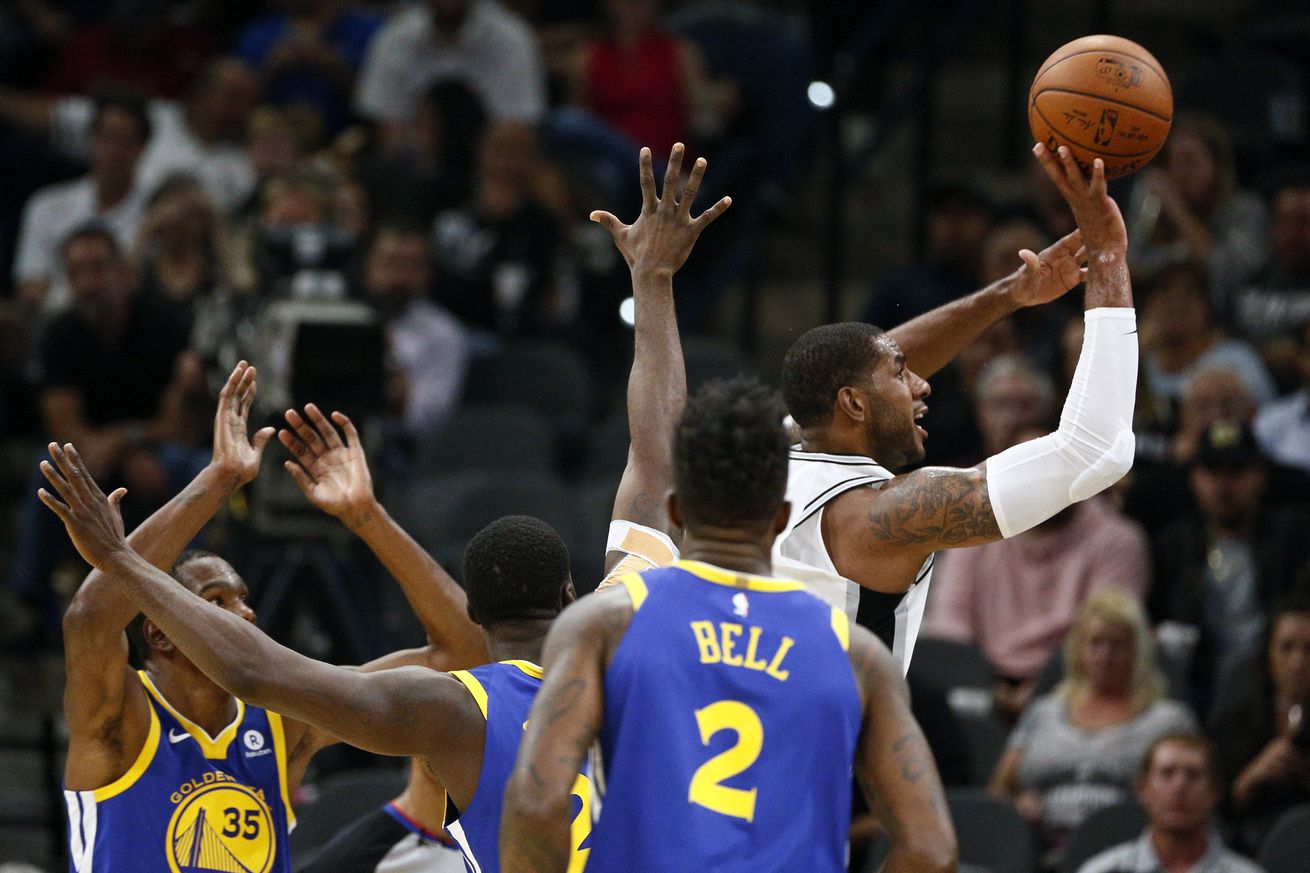 A hot start wasn’t enough to sustain the short-handed Spurs against the defending champs.

Leads are fickle, illusory things against the Warriors — a fact the Spurs know all too well by now. Missing three rotation players on Thursday, including Kawhi Leonard, San Antonio struck first with as impressive a stretch as we’ve seen this year before slowly coming undone and losing, 112-92.

A short-handed, Kawhi-less whatareyagonnado loss at the hands of the Warriors? It’s beginning to feel old hat for San Antonio.

Really though, there’s a certain familiar feeling that every fanbase experiences at the sight of the Warriors. It’s not quite the fixed contempt the AT&T Center directed at famed heel Zaza Pachulia during player introductions, and it’s certainly not the affable jocularity Gregg Popovich expressed towards Steve Kerr in his pregame chat. It’s an unsavory blend of reverence and urgency, which spikes whenever the ball leaves a Warrior’s fingertips.

There’s a reason they’re “the best team in the world,” as Gregg Popovich called them after the game, and beating them requires a full 48 minutes reminiscent of the way the Spurs played in the first nine.

Over that stretch, the Spurs exploited a flat-footed Warriors defense with good rebounding, quick passes, sharp outside shooting, and decisive drives to the rim — none more fun than this flush by Danny Green.

A Manu Ginobili three put the Spurs up 28-12 and prompted a technical foul for Kerr, one of four handed out between the two teams on the night.

But the Warriors feed off slights and provocation, whether perceived or real, and often rely on them to get going. They are the slime in Ghostbusters 2 in a way: a lethargic puddle one moment and an unstoppable, flowing force the next.

The Spurs didn’t do themselves any favors, though. Back-to-back turnovers at the end of the first led to easy Golden State buckets and began a trend for the night of San Antonio passes attempting to thread their way into hopelessly tight spots. To their credit, the Warriors upped their intensity on the defensive end, cutting off passing lanes and forcing the Spurs into playing a more stagnant style of offense. For a team with few options to generate easy baskets, it became a problem.

Also a problem: Kevin Durant, who came alive in the third quarter after a quiet first half. The 2017 Finals MVP torched San Antonio after the break, almost single-handedly turning a five-point Spurs lead into a six-point deficit heading into the fourth. It didn’t matter if it was Kyle Anderson or Danny Green on him; Durant had no trouble scoring from all over the floor.

While there were lapses in some areas, effort was not one of them. Manu drove hard to the rim, absorbing contact multiple times and returning rather gingerly to the bench following one foul in the first half. Aldridge and Anderson could be seen lunging for chasedown block attempts, and Patty Mills fought hard whenever he was targeted on mismatches in the post. It just wasn’t enough.

In the fourth, the Warriors didn’t let up, outscoring the Spurs 28-14. An innocuous call with under five minutes left led to two consecutive technical fouls for Pop, who before the game joked that an early night wouldn’t be such a bad thing. (I wonder what the under was for number of games before his first ejection of the season.)

There are times when Pop’s ejections feel more like performance art than reactions to an injustice, the kind of considered actions that have a statement behind them. Sometimes they’re critical of the team’s play, while others they’re almost absolvent — a final, lasting gesture that this loss is not on them, but written by factors out of their control. Call it a reach, but that was the impression I got as the coach paced, somewhat calmly, back into the Spurs locker room on Thursday.

Here are some other notes…

A shake-up in the starting lineup

Not even the AT&T Center PA announcer seemed to know of the change in the Spurs’ starting five, as Patty Mills replaced Dejounte Murray. For what it’s worth, Mills said the change was not last-minute and that it had been decided on Wednesday.

No answer for the Warriors’ Big Four

Durant, Curry, Thompson and Green combined for 88 — 88! — points, to the Spurs’ 92. Even with limited contributions from the bench, that kind of production is going to be almost impossible to match by a team missing its primary offensive option.

High marks for LaMarcus and Kyle

That said, Aldridge continues to play superb, inspired basketball on both ends of the floor. His 10-of-22 shooting night is a bit misleading, since a lot of those attempts were created off his own hustle by creating second chances at the rim. He had five offensive rebounds and appeared too much for Defensive Player of the Year Draymond Green for most of the night.

Pop on Aldridge: LaMarcus was magnificent, he’s been magnificent every game.”

Anderson once again got the start in the place of Leonard and turned in one of his most complete games yet as a Spur. His defense on Durant was solid throughout (not as great in the first half as Durant’s 1-of-9 shooting may suggest, nor as bad in the third as Durant’s 15-point quarter might, either), to go with a season-high 16 points, seven rebounds, four assists, two steals and a block. After the game, when pressed to describe Anderson’s play, Pop called him “ethereal.” As someone who’s still keeping the faith with Kyle, my heart fluttered the slightest bit.

“I know how not to do that, because we’ve won five championships but never won back to back, so I’m the last guy to ask that question to. I have no clue. Ask Phil (Jackson).”

A timetable for Kawhi, sorta

No news is good news, as the adage usually goes. But in the case of Leonard’s quad injury, the silence around Leonard’s return was starting to become a cause for concern. However, Pop’s “hopeful” timetable of Leonard returning within the next three weeks should quell some of that anxiety. For now, at least.