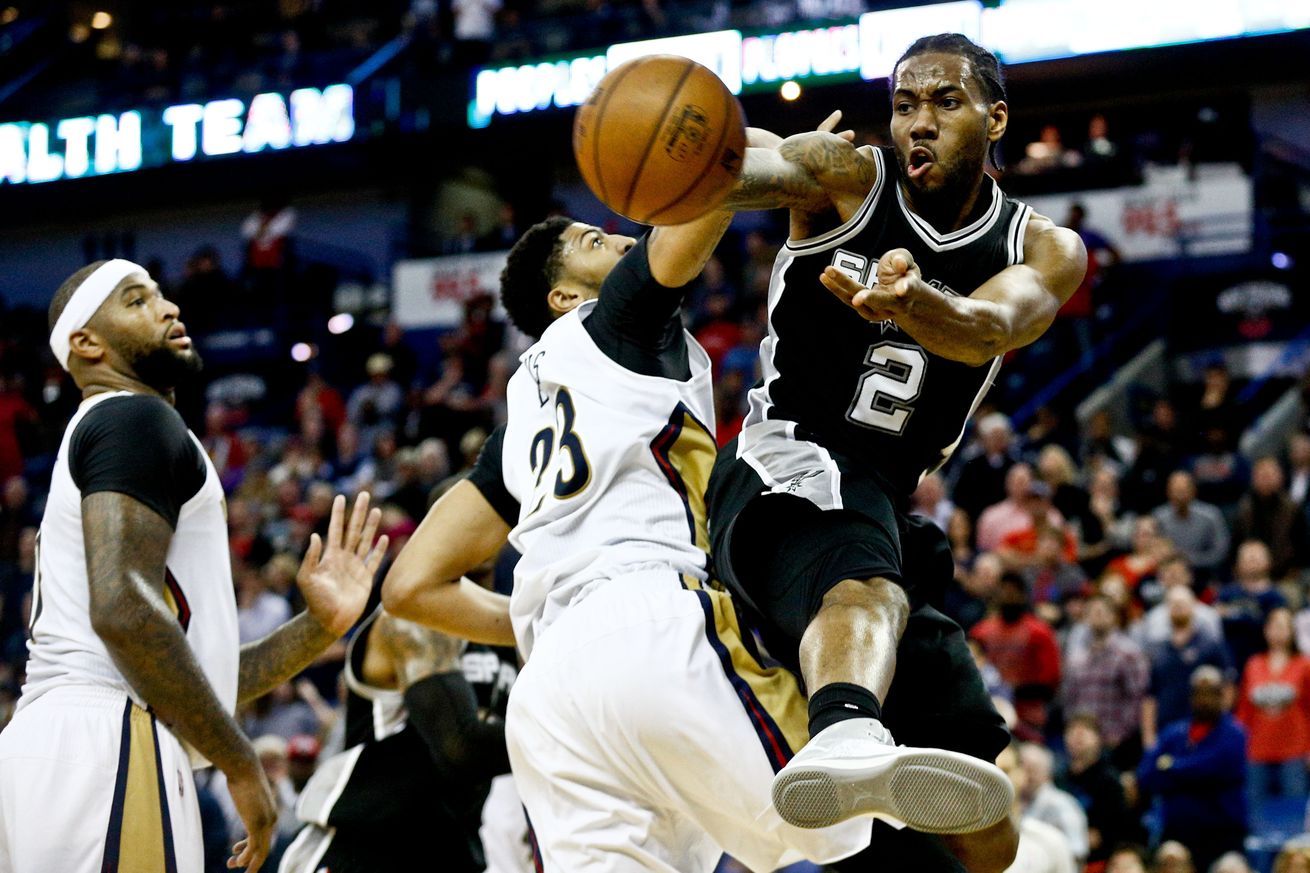 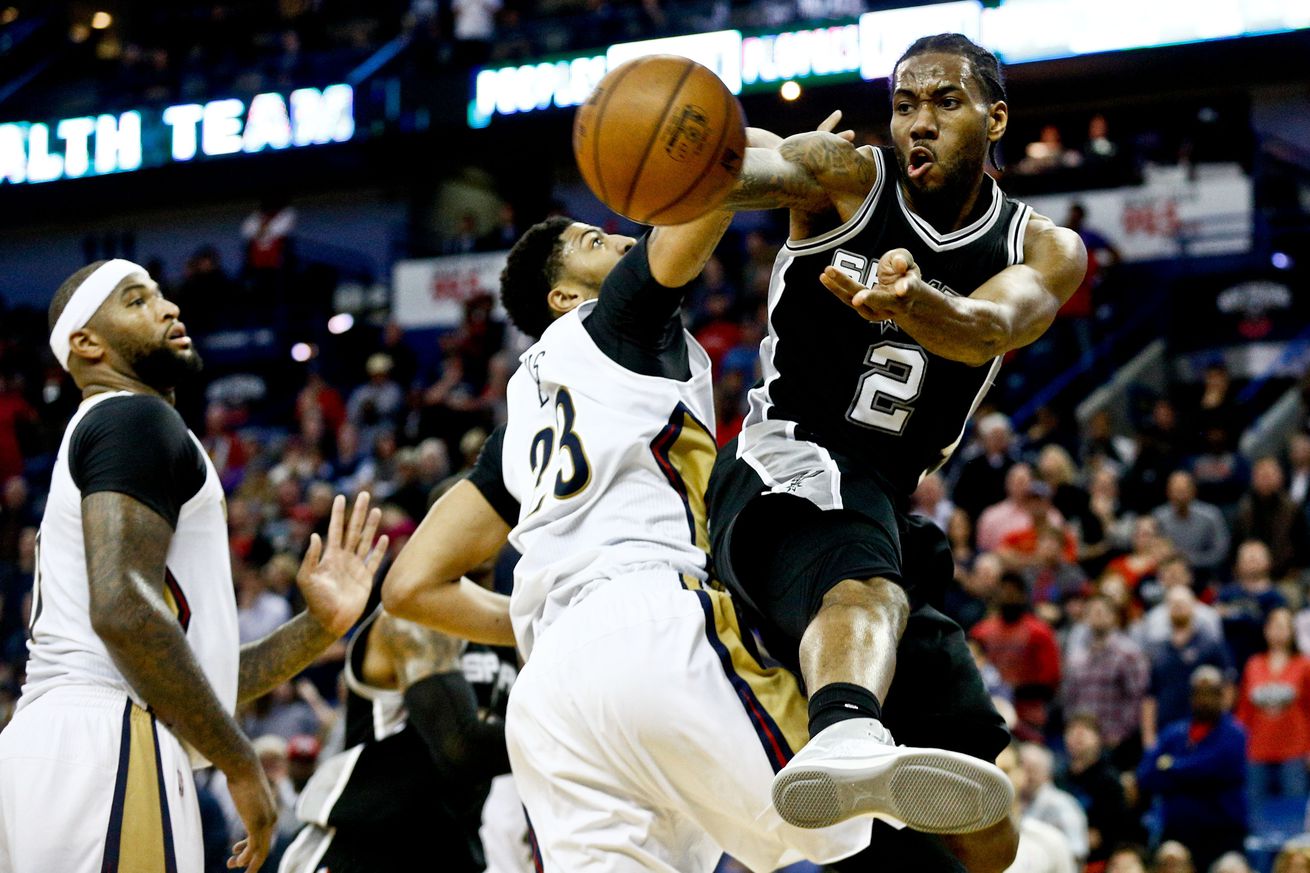 It’s never easy in “The Big Easy” for San Antonio, but we’ll take it

The Spurs were playing their typical blah game in the Smoothie Center, where they typically show all the discipline, composure and focus of a bachelor party bar-hopping on Bourbon Street, and I was all set to copy and paste my recap from the loss there on Jan. 28, deftly squeeze in a couple of lines about Boogie Cousins in there and go about salvaging what was left of my Friday night. It had been an ugly, grim, back-and-forth tilt most of the way, but the Pelicans were up four points with less than a minute to go.

And that’s when Leonard stole back a possession in a two-possession game, raced to a signature “pick-six” slam after swiping the ball clean from Jrue Holiday and gave the Spurs a lifeline to steal the game.

It’s tough to argue they deserved the win, but, well…

The whole game was like something out of the 50’s, really, only with much bigger, much better athletes. Neither team seemed at all interested in working the shot clock and passing it around in search of a quality shot. Forget going form good to great, most of the time it was all either team could do to go from an awful look to decent one. By my count the Spurs got decent or better looks on 50 of their 90 possessions during regulation, and I was grading pretty liberally, counting anything that resulted in an offensive rebound or free-throw attempts as a quality possession. And while I wasn’t tracking the Pelicans, I guarantee they were even worse. They were just jacking from all over the floor, early in the clock, taking the kind of shots you’d expect of a Big Ten squad. Anthony Davis in particular was really off his game, doing some homage to Kobe Bryant during his farewell tour.

And yet, the Pelicans were up four with a minute to go, with a roster featuring Davis, Cousins, Holiday and nine raffle winners.

The first quarter started off well enough. San Antonio’s first four possessions were all good, and they made do even things slowed down. Leonard got bailed out for a couple of trips to the charity stripe and hit a couple of contested jumpers on the left side. He scored 14 in the period, but no other Spur had more than 3. The problem was the Pelicans came out pretty sharp, with 10 assists on 13 makes. Leonard started off guarding Holiday, but couldn’t slow him down much at all. It also didn’t help that Dewayne Dedmon got in early foul trouble and was a non-factor all game.

The visitors were down 30-27 after one but from then on their defense tightened up considerably or the Pelicans just decided not to bother passing to one another, whichever reality you prefer. Both teams were 1-of-7 from outside in the second quarter, but mostly the Spurs kept blindly charging toward the rim and wasting those opportunities, whether it was Tony Parker —who wasn’t himself after returning from a quad injury— Jonathon Simmons or Leonard. The Pellies were sloppy, with six turnovers in the period, and the Spurs got to half with a 49-48 lead, with Leonard matching the Cousins/Davis combo with 20 points.

Things got even more dire in the third quarter, with both teams managing just 18 points on a combined 14-of-43 from the floor. Leonard had a couple of sweet set-ups to Dedmon and Danny Green early and LaMarcus Aldridge hit a couple of contested ones but otherwise there wasn’t much of substance to be found. Mostly I remember Cousins abusing Pau Gasol.

The rock fight continued in the fourth quarter. The Spurs kept bricking all of their three-point attempts and were 3-of-22 from outside in regulation. They clanked away at the free-throw line too, making just 8-of-14, with Gasol going 4-of-8. The Spaniard missed 1-of-2 with a chance to put the Spurs ahead late, but they were fortunate to even have that chance after a no-call on what should’ve been an over-the-back on Aldridge on the previous possession. Gasol also had to play a lot more in the game than he bargained for because Dedmon fouled out midway through the fourth quarter, with one needless dumb hack after another.

Leonard and Aldridge —who defended superbly and rebounded well all game— got the Spurs to overtime almost by themselves, and from there they overcame an early five-point deficit thanks to hot shooting from Gasol and Patty Mills. The percentages finally swung in their favor and the Spurs sank 3-of-5 from deep, with Leonard’s baseline kickout to Mills in the corner putting them up 100-96. Aldridge bricked 3-of-4 freebies that would’ve iced the game, but to his credit he bodied up Cousins well and didn’t concede an open three-point look to him at the buzzer.

So the Spurs got to leave town with a win and are inching ever closer to the Warriors in the standings. Leonard finished with his usual 31 and led the team with six dimes as and three steals, including one off Cousins in overtime that led to Mills’ dagger. Aldridge had 21 and 15. Gasol and Mills combined for 28 off the bench. Parker and Manu Ginobili… looked like two guys ready for a breather against Minnesota on Saturday. Don’t be surprised if Gasol joins them. Heck, don’t be surprised if Leonard and Aldridge sit too.

And don’t be surprised if the Spurs find a way to win in spite of it all, because if they can come away on top at New Orleans despite shooting 42 percent, then anything’s possible.

Up Next: Saturday Vs. Minnesota Timberwolves (25-36)

Well, this hardly seems sporting. The Spurs are totally gassed and the T-Pups, who haven’t played since Wednesday, await them on a SEGABABA. And they’re hot too, having won four of their past five, including a 107-80 thrashing of the Jazz at Utah. They’ve still got an outside chance at the playoffs, just three games behind Denver for the eighth seed. They haven’t missed Zach LaVine much, as it turns out. The Spurs won the previous two meetings, including at home on Jan. 17, in a 122-114 shootout where Leonard and Aldridge combined for 63 to offset 27 from Karl-Anthony Towns and 21 and 15 from Ricky Rubio. I’m curious who Pop is going to throw out there for this one, but if Leonard and Aldridge play then you know he’s not being entirely truthful about not caring about the standings. Anything short of a “DNP-Rest” from the entire over-30 crew plus Leonard is a declaration of intent in my mind.