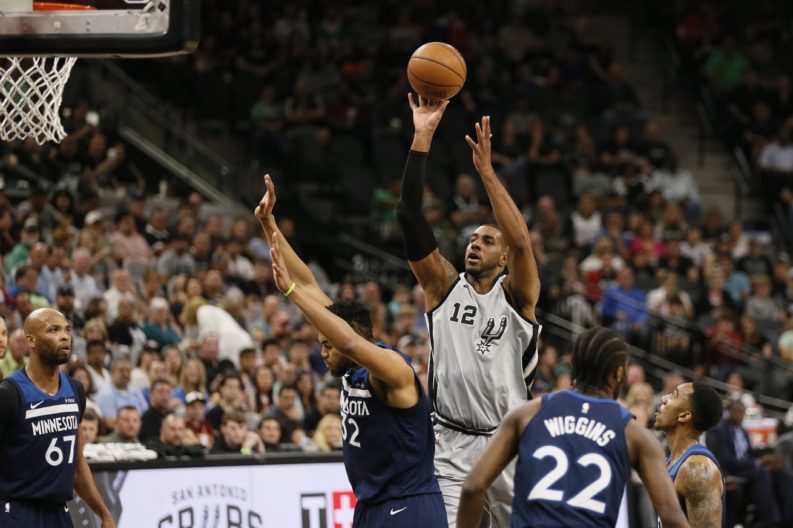 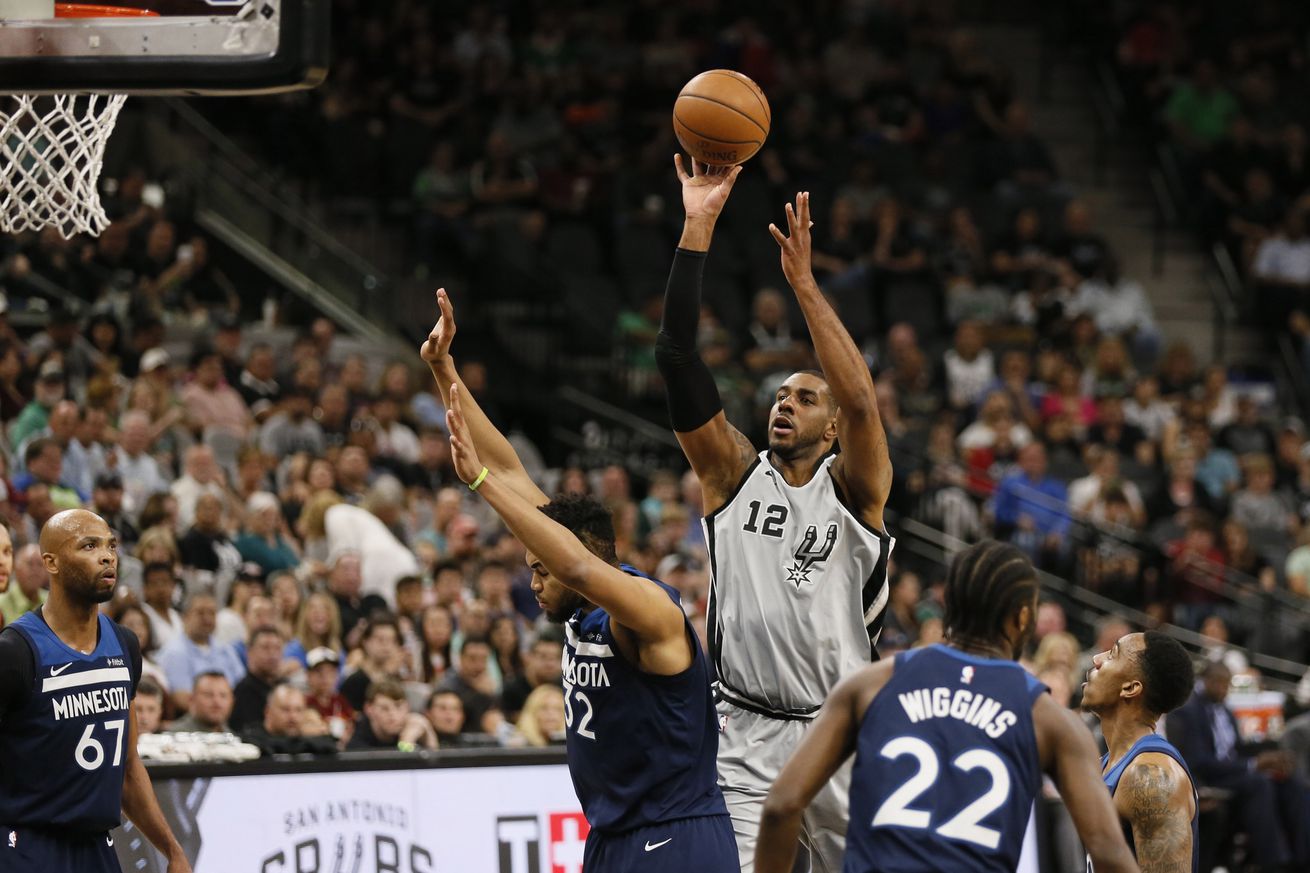 Behind another banner LaMarcus Aldridge performance, the Spurs got a third straight home win to keep pace in a crowded Western Conference playoff race.

The talk all season has been of what’s ailed the Spurs—of woeful quads, ankles, heels, and shoulders. As they continue down this final, onerous stretch of the year, they’re beginning to speak of a more productive affliction: hunger.

In a battle over playoff positioning, the Spurs out-rebounded and often out-hustled the younger Timberwolves en route to a crucial 117-102 win, giving them an equally important 2-1 tie-breaker over an opponent they’re now tied with in the standings.

“We need every win right now,” said LaMarcus Aldridge, who paced San Antonio with 39 points, 10 rebounds and two blocks. The team’s lone All-Star was a force on both ends of the floor, outworking an elite big man for the second time in three nights while getting whatever he wanted around the basket.

When asked how he and the rest of the team can sustain the intensity they’ve shown of late, he said it was came down to appetite:

Aldridge’s nightly battling for leverage and position on the block is often overshadowed by the turnaround jumpers they produce, as is his understated defensive game, which lacks in counting stats but remains a linchpin of a top-three NBA defense. On Saturday night, his effort was amplified for all to take notice:

Aldridge, along with Rudy Gay (14 points, three blocks) and Pau Gasol (another ageless 12-8-7 night), could be seen regularly battling for rebounds, blocking shots, and chasing down loose balls, giving the Spurs an edge inside for most of the night.

“LA and Pau were fantastic,” said Gregg Popovich. “[Rudy] did things beside score. He got two or three blocks, he got a steal, he rebounded. That’s all important. His size and talent — that adds a lot to us when he can do that.”

The trio was part of the wider veteran presence that Pop leaned on throughout the night, beginning at the end of the first when the elder bench unit erased an early nine-point deficit. That keyed a 15-minute stretch in which the Spurs scored 48 points, giving them a double-digit lead heading into the half.

It was a similar story in the final quarter. With under nine minutes left, Dejounte Murray drove the ball baseline, whipping a precarious pass behind his body which was deflected and bounced to an opposing player — the young guard’s third and final turnover of the night. Minnesota scored on the other end to make it 98-92. Looking on from the scorers’ table, Pop immediately turned towards his bench and signaled for Tony Parker to check in, as the Spurs — facing an athletic but still-green Wolves squad — closed the game with nobody under the age of 29. They did not turn the ball over again from that point on, and outscored their opponents 19-9 to put the game on ice.

When the team combines high levels of poise and intensity, good things often happen — even snowball, if you ask Manu Ginobili:

“There are a lot of things that are contagious. When somebody is feeling down because a shot is not falling or because they made a mistake, they start bouncing their heads and the a teammate sees it. When we’re all fired up and pushing each other and helping each other or making a shot or diving for a ball — getting a block like Rudy got — you know it fuels also. So, it’s contagious in a good way, too. So, today that happened and we are in a good spot at this point. I wasn’t that optimistic a week ago about us and getting all these wins and facing Minnesota. We got it, and we gotta keep doing it.”

The Spurs have at times looked like a team that would succumb to the tough breaks of their season. But, with 12 games left and suddenly riding a promising three-game winning streak, the right conditions appear to be catching on. And not a moment too soon.

I may have been too busy watching incensed Wolves fans lose their minds over Derrick Rose on Twitter (he was a game-worst minus-21 on the night) to notice that the Spurs didn’t miss a shot for a nice, long stretch — mostly while the former MVP was on the floor.

It was only after the game that I learned that it was 19 (!) field goals in a row that the Spurs made. Not bad:

The @spurs knocked down 19 consecutive field-goal attempts in their W, the 2nd longest streak of successful field goals in a game over the last 10 seasons!#GoSpursGo pic.twitter.com/6on5DU2YxW

Another historically impressive set of numbers: 32 and five. As in, the Spurs’ total assists and turnovers, respectively. Only five other times in the past five seasons has a team notched that many (or more) assists with that few (or fewer) turnovers.

The number of the night, though, might be three. That’s how many wins the Spurs have strung together in a row for the first time in the calendar year, which now has them back in the hunt for a playoff spot. Facing a decimated Warriors team on Monday, they have a good chance to make it four.

Pop, on the de-emphasized post-up game in today’s NBA

The Spurs and Wolves are two of the league’s best post-up teams, which prompted one reporter to ask Pop about the post-up’s place in the game today. Here’s his response:

“You don’t see as many people [posting up] as we saw in the past. I think a lot of kids growing up would rather shoot threes than go down there and battle. Because it is more of a war down there — I think it’s very physical, I think it’s overly physical. Big guys end up beating each other up down there, where two perimeter guys — it gets called much quicker. I’m not sure why that is, but I can guarantee you that’s the way it is. These two guys tonight (Karl-Anthony Towns and LaMarcus Aldridge) I’m sure would agree with that,too, because they face it every night.”

Because of the logjam in the playoff standings, I’ve decided to keep day-to-day track of the tie-breakers at play for San Antonio. I’ll share them in every recap I write, but also tweet it out every day. Here’s how things stand as of Sunday morning:

Updated standings with Spurs tie-breaker scenarios. Shoutout to Maester @PaulGarciaNBA for decoding why the three-way tie has SA at 7th right now. pic.twitter.com/HpwKLkGLCJ

You’ll see that, although the Spurs own the head-to-head tie-breaker over the Wolves, they currently sit behind them in the standings. That’s because, in the event of a three-way tie, standings are decided by the combined records each team has against those other two teams. The Spurs have the worst among them, the Wolves and Jazz, thanks mostly to the three losses they’ve suffered to Utah. It is, thus, a bad idea for the Spurs to end up in any three-way tie that includes those pesky Jazz.