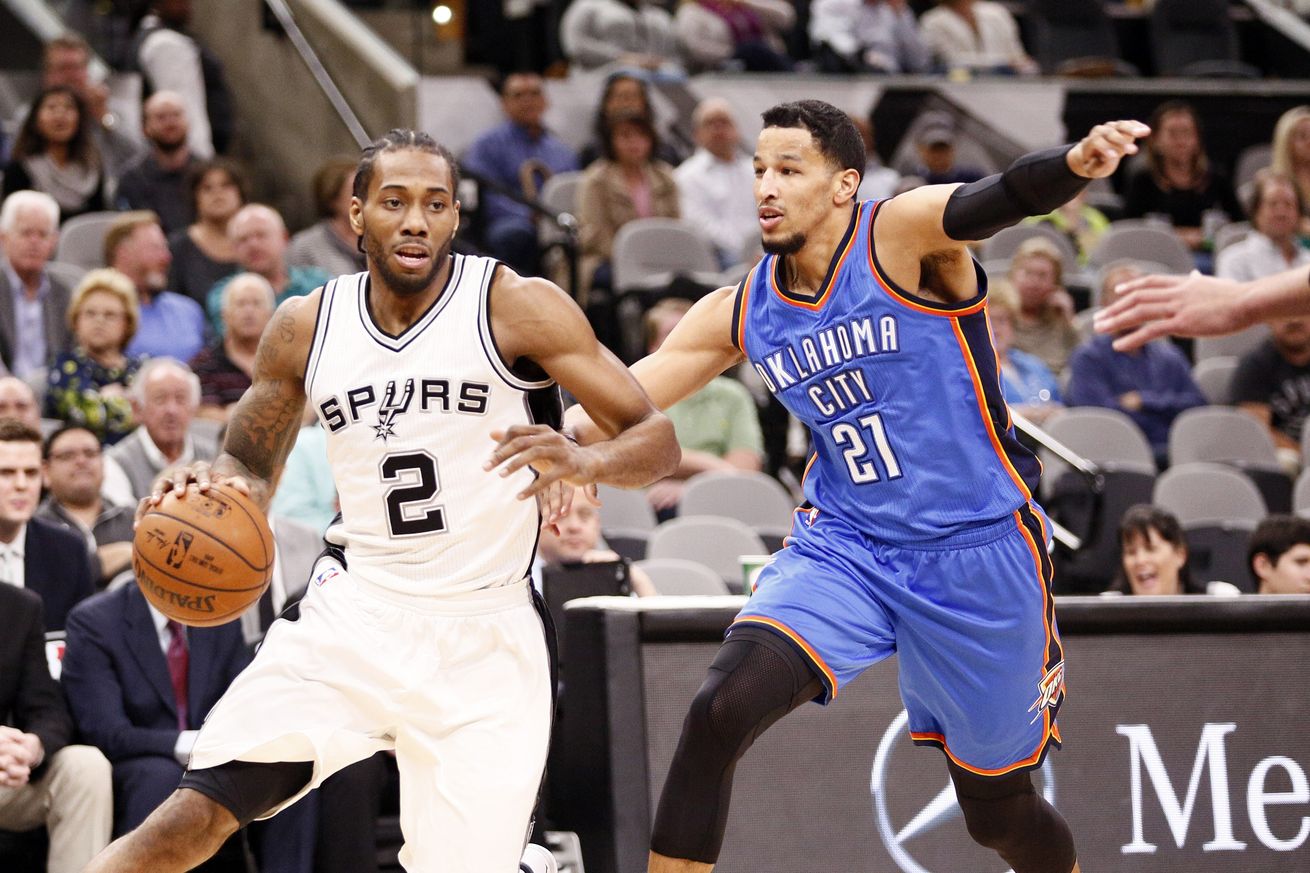 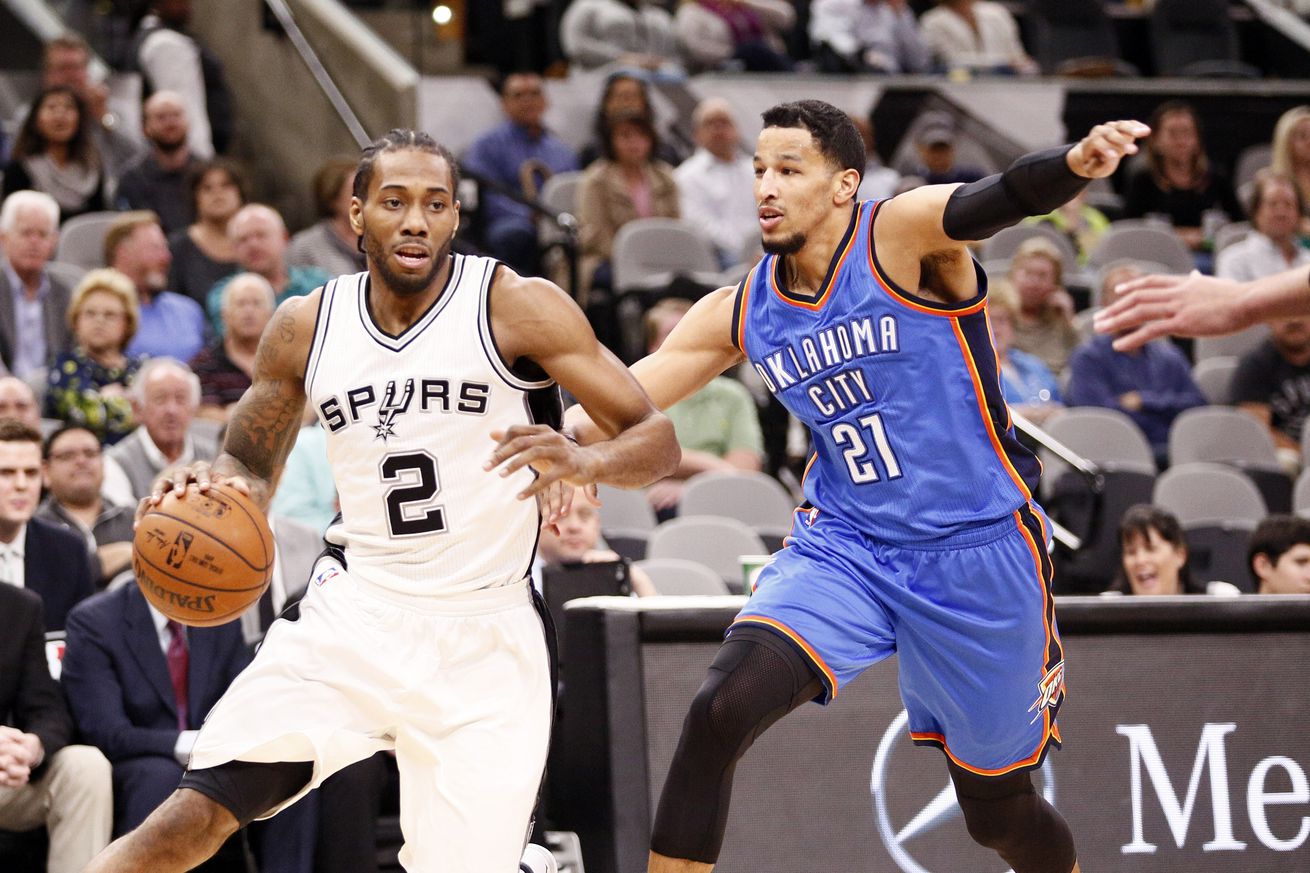 With just under four minutes to play in the third quarter the Thunder took their first lead of the game since the early part of the first period on a Russell Westbrook drive that would give the triple-double machine his 26th and 27th points of the game. The Spurs looked like they might lose another game, but the Spurs would not lose this one, despite giving up their once 18-point advantage over the visiting Thunder thanks to some great team defense and a monster fourth quarter from Kawhi Leonard.

The game started off pretty well for the good guys, which wasn’t too surprising after the team lost their last two games. The team tends to play pretty well after losses and the presumed reaming they receive after losses from Gregg Popovich. It also helped that the Spurs were playing a Thunder team that was lacking not just Kevin Durant and Serge Ibaka but Enes Kantor was unavailable in this one as well.

And the home team got their high-energy, far-outplaying-his-contract guy in Jonathon Simmons back in this one after The Juice missed the last three games with a sprained wrist. Simmons was a breath of fresh air in this one, bringing game when the team needed it.

The first six minutes of the game were a back-and-forth affair that led to 10-all before the Spurs closed the opening quarter out on a 23-7 run to take a 31-17 lead. On the way to their double-digit lead there were a few highlights, starting with this excellent block from Danny Green on Russell Westbrook.

And this beautiful, err nifty (hey, Sean), passing from the Silver and Black.

Some nifty passing from the @Spurs on @NBATV! #NBARapidReplay pic.twitter.com/SW0UASKHTu

David Lee continues to be a boon for the Spurs and had this nasty putback jam early on. It wasn’t his only dunk on the way to a 7-7 night.

How fun is this?! Patty Mills with the sneaky in-transition-swipe, Lee with the smart pass and Manu with the bullet to Kawhi for the easy bucket.

The second quarter was a bit of an offensive struggle for both teams, the Thunder shot 35% to the Spurs’ 29%. The teams combined for 26 free throws in the quarter which accounted for 20 of the quarter’s 46 points. The Thunder trimmed their deficit to 10 going into the break at 52-42.

Tuesday night was bad, posting a net-rating of -30.2 as the Thunder not only clawed back into the game but took a three point lead as late as the two minute mark of the period. Westbrook and Victor Oladipo had their way with San Antonio and the Thunder dominated the boards as the Thunder outscored the Spurs 33-27. A late Patty Mills three and a Kawhi and-one combined for a 6-0 run to end the quarter for the Spurs or it would have been worse.

Jonathon Simmons was great to start the fourth for the good guys, the highlight of which has to be this incredible block.

Before that happened Davis Bertans got his only bucket of the night, but what a bucket it was! Dude’s got moves.

David Lee had another Dunk off a great feed from The Manu.

Kawhi got a bit of a breather to start the final period. When he checked back in it was all him as he took the game over with a burst of hot fire. The stud dropped 12 points in four minutes and 15 seconds. That gave the Spurs a 17-point advantage and the game. No question that this was the move(s) of the game. It’s worth a couple of looks.

Crossover to the up & under by Kawhi Leonard pic.twitter.com/UmnN0oqooQ

San Antonio put a bit of a scare into their fans during the third quarter but in the end your Spurs improve to 37-11 for the year and remain firmly in the two-seed out West.

The Spurs stay at home for two more games before heading out on their annual Rodeo Road Trip. The Sixers will be in the AT&T Center on Thursday night and the Nuggets will visit San Antonio on Saturday. After that the team is on the road until March.