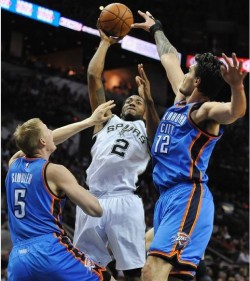 The San Antonio Spurs rebounded after a loss to the Dallas Mavericks yesterday to hand the Oklahoma City Thunder one of their worst defeats this season in a 130-91 blowout. The Spurs played a complete game from start to finish, sharing the ball and shot lights out from beyond the arch. This was a complete team effort not only from the starters by also from the bench as they played great defense down the stretch. Russel Westbrook had been on a tear lately, destroying teams all by himself but his reckless abandon style of play met with a stingy Spurs defense.  Who held Russel Westbrook to just 16 point on the night and his inability to get to the rim and get his team mates involved proved costly.  Tim Duncan had the play of the game as he shot a rare three pointer in the third quarter and finished the night with 16 points. Next up for the Spurs is the Dallas Mavericks this Friday March 27th at 7:30 PM the game can be seen on Fox Sports Southwest and heard on WOAI 1200 AM.