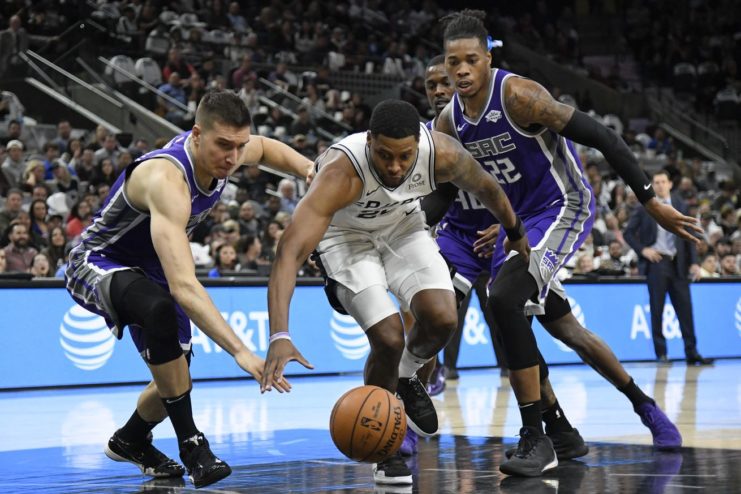 It wasn’t pretty at all, but the Spurs got their second comeback win in a row.

After playing one of the most thrilling games of the season against the Rockets, the Spurs had one of the ugliest performances in recent memory. Fortunately, San Antonio’s 105-104 overtime win over the Kings will count the same as any other in the standings, no matter how excruciatingly difficult it was to watch at times.

The game was a mess from the start. Both teams struggled with spacing, so it wasn’t a surprise to see the starters on both sides attack one-on-one, with mixed results. There was little ball movement and when the offenses created some good looks, the shooters couldn’t convert them consistently. The benches did a little better, but poor decision-making in their attack prevented San Antonio from taking advantage of a Kings team that seemed unable to hurt them on the other end. The Spurs closed the half strong and managed to get a double-digit lead thanks to some hot outside shooting from Marco Belinelli and, surprisingly, DeMar DeRozan, but nothing about their performance suggested they were sharp or focused enough to cruise to a win.

Surely enough, the starters came out without a sense of urgency in the third quarter and allowed the Kings to close the gap. Sacramento simply played with more energy and started to hit some of the shots that were not going down for them earlier in the game and that was enough to get them control of the game, as the Spurs seemed unable to respond. The bench, as it typically does, tried to help them stay in it, but the Kings always seemed to have an answer after timely timeouts and stayed in front until late in the fourth quarter. It seemed like the Spurs were going to drop a winnable game, just as they have several times this season.

A game this ugly couldn’t possible have a normal ending, though. After leading by nine points with under two minutes to go, the Kings collapsed spectacularly. They first sent Dejounte Murray to the line, then had back-to-back turnovers that resulted in easy buckets for San Antonio. A few video replays and coachs’ challenges later, the game was close, but after a LaMarcus Aldridge putback and a couple of Harrison Barnes free throws Sacramento led by three with 14 seconds to go. The weirdness would continue, as Gregg Popovich drew a beautiful play and none other than Spurs’ fans favorite scapegoat, Marco Belinelli, hit a three to send the game to overtime.

Marco Magic!@marcobelinelli sends it to OT tied at 100. #GoSpursGo pic.twitter.com/kbe1mwvHyk

Nothing made sense at this point. The Spurs had three consecutive turnovers to start the extra period and wouldn’t attempt a field goal until there were 2:22 left in the game, but somehow the Kings were equally inept on offense, so they couldn’t create separation. They got a lead after a Buddy Hield bucket but then a jumper from Murray put San Antonio back in front with 29 seconds to go. Sacramento had four opportunities to win it in the final possession, but somehow botched them all to bring this rock fight of a game to its merciful conclusion.

It’s impossible to figure out these Spurs. They are capable of playing inspired ball for a game, then look completely discombobulated the next one. They were fortunate to run into an opponent that somehow had an even worse night than they did, which is the only reason they escaped with a win.

Let’s just be happy they are moving up in the standings, and let’s not talk about this performance ever again.

Next game: Vs. Cavaliers on Thursday

The Spurs will get a break after a hectic stretch in their schedule and will face the reeling Cavs at home. It’s a perfect opportunity to get a three-game winning streak going before a couple of road games.