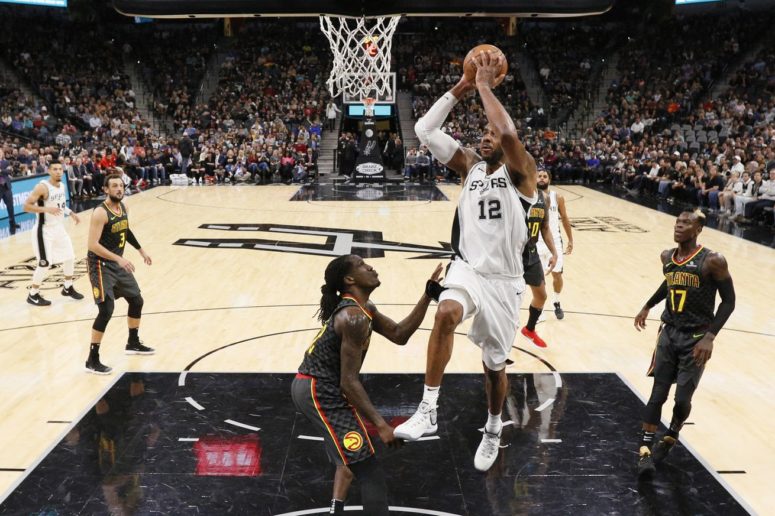 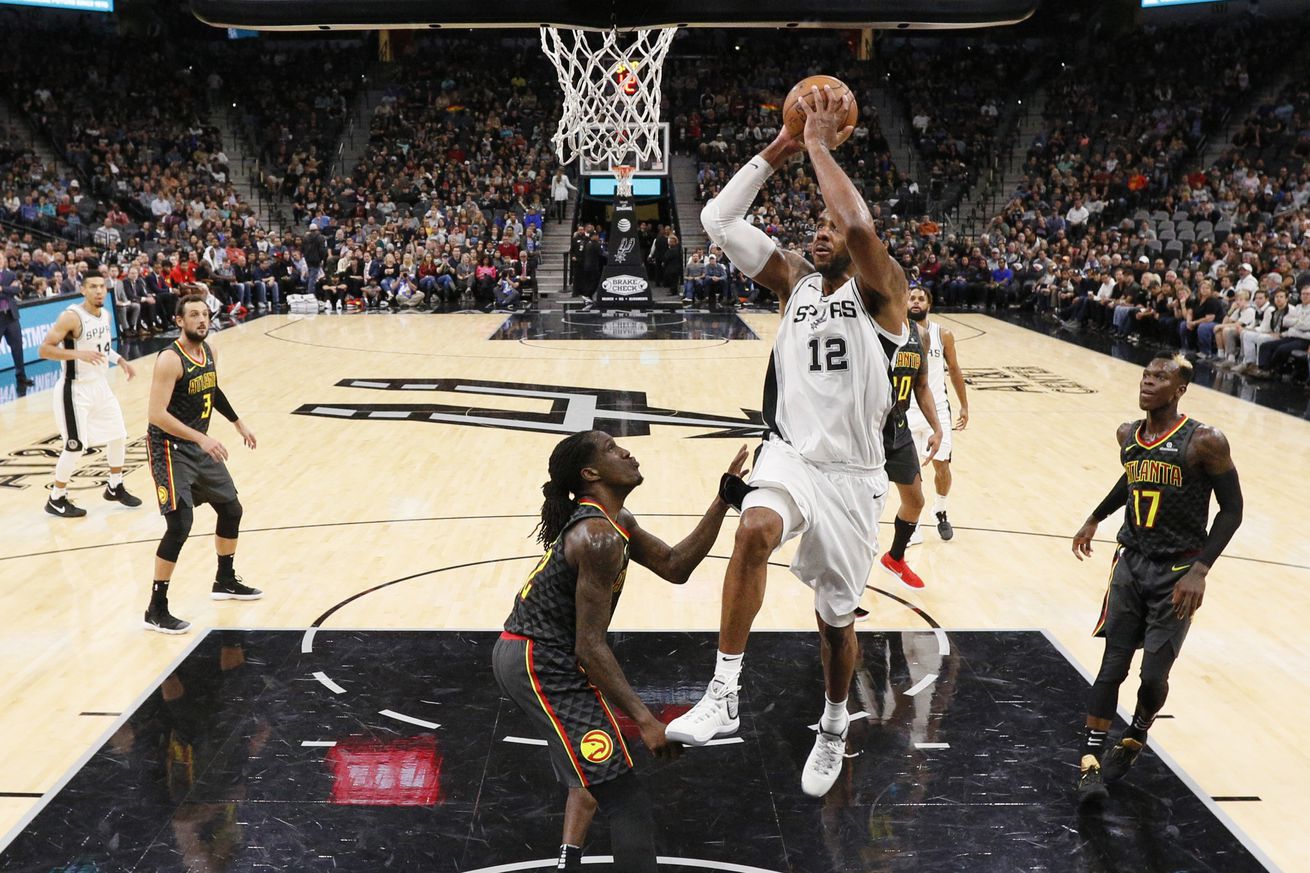 Despite 18 turnovers, the Spurs improved to 11-6 behind double-doubles from LaMarcus Aldridge and Kyle Anderson and another vintage game from Manu Ginobili.

At one point during the Spurs’ 96-85 win over the Hawks, Manu Ginobili collided with an opposing player while cutting to the basket, staggering temporarily before turning back to the three-point line to receive the ball. It was relatively pedestrian contact — especially for a player, like Ginobili — and yet I grimaced, because one can’t help but react viscerally as number 20 pings his quadrigenarian body around the floor.

This is especially true when sitting in the AT&T Center, where the collective heartstrings of some 18,000 people are perpetually tethered to his actions. Each possession is an open nerve ready to be prodded, every dribble-drive, bucket, or fall to the ground the catalyst for countless gasps or roars. Such is the Manu Ginobili Experience, now more than ever.

The Argentinian gave fans plenty to cheer for on Monday, as he dropped 16 points against Atlanta in 26 minutes (the second-most he’s played this season) by doing a bit of everything. Ginobili created out of the pick and roll, took a steal all the way to the rim, and beat the first quarter buzzer on this step-back over former teammate Marco Belinelli:

Still the over-matched Hawks kept this one interesting, thanks in part to another sloppy performance by the San Antonio offense. The Spurs turned it over 13 times in the second and third quarters alone (18 total on the night), which prevented them from getting any separation from an Atlanta team that’s only won 3 games this season.

The turnovers were the first thing Gregg Popovich touched on after the game, not happy to hang his hat on the 29 assists the team notched and adding that the ball movement was “inconsistent.”

Ginobili expanded upon that: “I think there’s a lot we can do better. Today we played with intensity — we hustled; we scrambled — but we were not as sharp as we were in the second half against OKC. There are some teams you’re going to be able to get away with 18 turnovers. Most of them will not let you get the win.”

Most of them haven’t. Shoutout to Project Spurs’ Paul Garcia, who noted that San Antonio heading into Monday had only won two of the seven games this season in which it committed 15 turnovers or more. When the pace is as slow as the Spurs play it (they remain dead-last in that department), those lost possessions matter even more.

It didn’t help that the team’s leading scorer, LaMarcus Aldridge mustered only four first-half points, as the Hawks turned to another former Spur, Dewayne Dedmon, to defend his ex-teammate. Dedmon had 11 points and nine rebounds on the game, also hitting his one three-point attempt of the night (oh yeah, he apparently shoots threes now), and helped make things difficult inside.

But sometimes being better is simply enough, and the Spurs’ edge in the size and talent departments proved too much down the stretch. With the Hawks down one big man (Luke Babbitt was forced out with a lower back injury) Aldridge remained aggressive, found his rhythm, and scored 12 of his game-high 22 points in the fourth period, his first basket coming on this play in transition:

While Aldridge appears to have regained his All-Star form, and Ginobili continues to flashback to his halcyon days, 24-year-old Kyle Anderson is using these opportunities as a starter to show flashes of the player he can be. He had 13 points, a career-high 10 assists (to just two turnovers), and six rebounds, rewarding Pop for the elevated role on offense.

(here was that play) pic.twitter.com/66Xfd8ErzN

Unlike the assault on the nerves that it is watching Ginobili, Anderson is a snakecharmer with the ball in his hands, lulling everyone around him before making his move. Monday night was the seventh time this season the forward played 30 or more minutes, as he keeps making the most of his opportunities as a starter in Kawhi Leonard’s absence.

While used to absorbing whatever minutes may spill over to him from one night to the next, Anderson seemed to agree that consistent playing time has been a factor in his performances this season:

“You still want to play to stay on the floor, but I guess you get that leeway; you can try different things and take that risk. It’s obviously tougher playing when you know you’ve got someone coming to get you.”

Anderson said he isn’t thinking about when Leonard returns to take back his spot in the starting lineup — “Nah… (I’m) just trying to play well so I can stay on the floor when he does come back.” — nor is he wanting to be reminded of last season, when he similarly stepped in for an injured starter but struggled at times: “I don’t know what it was last year; I’m trying not to think about that.” His focus, it’d seem, is squarely on the moment at hand — a slow, methodical approach that has suited him pretty well up until now.

The Spurs won the battle of the boards, 52-to-38, which included 14 offensive rebounds (five of which were Aldridge’s). They’re now fourth in the league in rebound rate, and a handful against the ever-shrinking majority of teams around the NBA.

Nine times out of ten, if a Spurs guard has two steals and two blocks, it’s Danny Green. This time it was Mills, who added eight points, eight rebounds and seven assists.

Pop on the Hawks’ struggles, and Mike Budenholzer

“We’ve all been there; you know, he’s a wonderful coach he knows what he’s doing. He’s got some tough circumstances right now, but the deal with their team is they don’t play like their record. They’ve lost some squeakers. They compete every night. They move the ball on offense, bust their butts on defense. He’s done a great job of keeping them competitive night after night. He’s not just an Os and Xs guy. He understands what it takes to compete and keep guys ready. They’re gonna be a tough out for everybody, whoever they play.”

“Did he really? He had a good last year then, he did a really good job for us. He wasn’t just energetic. He gave us really good play on both ends of the court, so he ended well.”