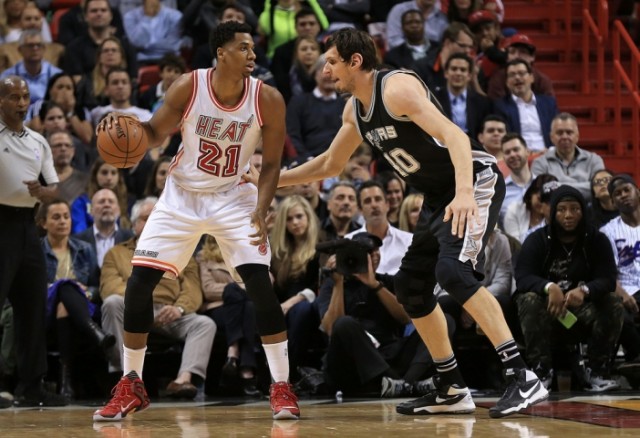 The San Antonio Spurs scorched the Miami Heat on Monday in the American Airlines Arena with a 119-101 victory. Granted the Miami Heat are not the super power they once were without  LeBron James. The Heat still managed to keep the game competitive through the first 3 quarters, but the Spurs proved to much in the 4th and put this one away. Highlights for the Spurs were bountiful in this game with both Kawhi Leonard and LaMarcus Aldridge putting on a show for the crowd. Things did get a little chippy when Hasan Whiteside laid down a vicious hit to Boban Marjanovic. Hassan Whiteside was immediately ejected out of the game in the 4th quarter with 9:35 left to play. When Miami Heat head coach Eric Spoelstra was asked about Whiteside after the game, here is his quote.

“That’s something we’ll deal with, with Hassan,” Spoelstra said. “We don’t condone that kind of play. We’ve been through this with him before. But it’s a disappointing play. That’s not a basketball play.”

Coach Eric Spoelstra later confirmed that they asked Whiteside to leave the arena immediately after the incident. The Spurs play as of late has been impressive as they have been able to keep winning games without Tim Duncan and Manu Ginobili. Even more impressive is the resurgence of LaMarcus Aldridge as he is playing like the NBA super star that he is. Next up for the Spurs is the Orlando Magic today with an early 6:00 PM tip the game is on Fox Sports Southwest and WOAI 1200 AM radio.

Spurs Vs Heat Full Game Recap on The Countdown 210 Podcast.