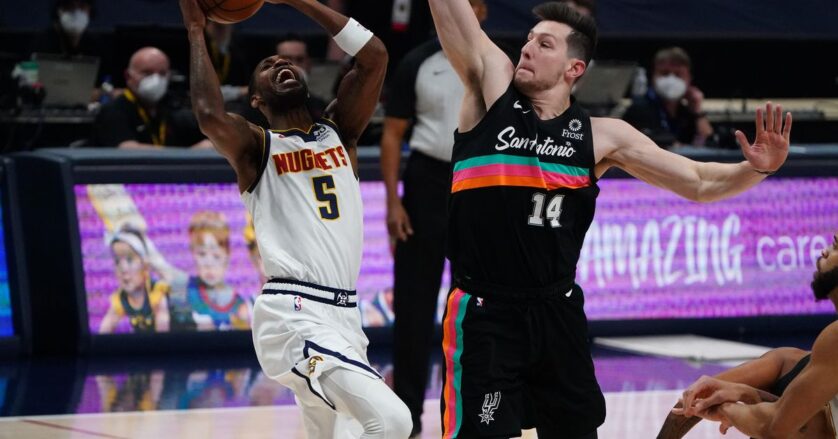 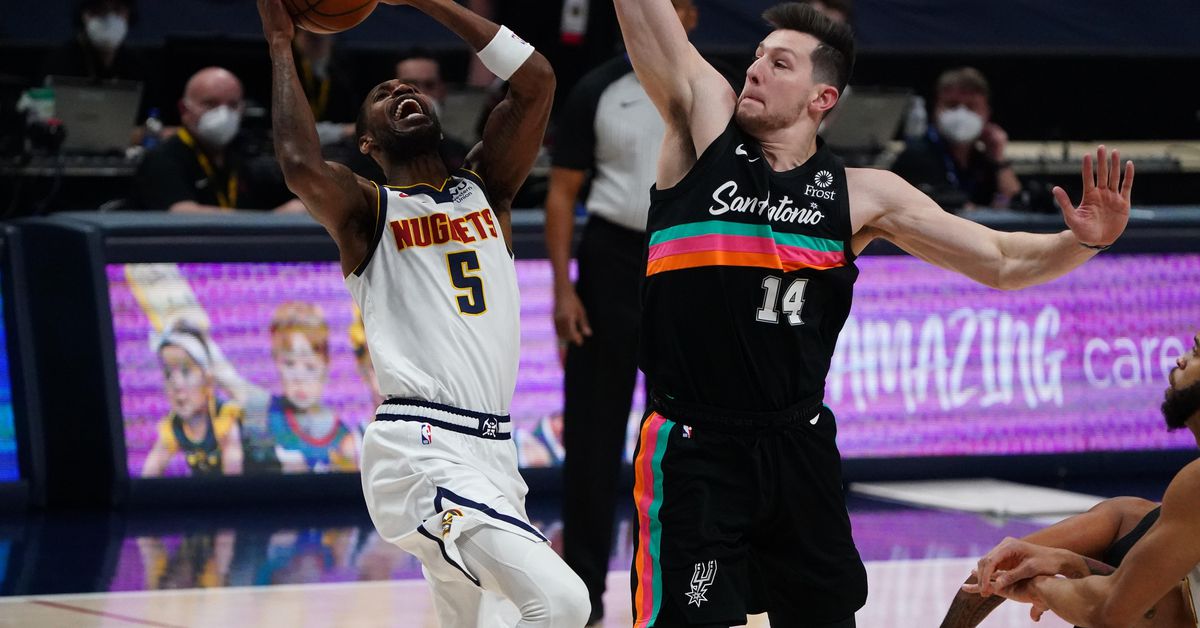 Following an embarrassing blowout loss to the lowly Cavaliers on Monday, the Spurs put up a better fight, but still fell to a superior Denver team. San Antonio kept pace with the Nuggets for most of the contest but ran out of steam late, and you have to wonder how the team will manage its energy levels with more than a month left in the season when fatigue is already starting to set in.

The game began with both teams exchanging quick baskets, as the Spurs created good looks with a free-flowing offense that relied on motion and ball movement. Meanwhile, Denver utilized Nikola Jokic’s transcendent passing by cutting to the basket since they knew that the Joker would find them no matter how little room he had. With the Nuggets’ recent acquisition of Aaron Gordon, they now have one of the biggest starting lineups in the league, and this was especially evident when it came to rebounding; Denver generated numerous second chances off of their own misses, and Michael Porter Jr. grabbed seven boards in the first quarter alone.

When the two benches hit the floor, the scoring instantly dried up for both sides. San Antonio’s offense became stagnant after moving with purpose earlier in the game, resulting in isolations that only generated low percentage shots. Gorgui Dieng, in particular, looked lost on the court, throwing passes directly to Nuggets players while also getting in the way of his teammates. On the other hand, Denver sorely missed the playmaking of Jokic with Javale McGee subbing in for him, as they struggled to create scoring chances and resorted to desperate shots with the clock winding down.

However, the script flipped once again after halftime, with the Spurs scoring 12 straight to begin the third quarter. The good guys even briefly led by double digits at one point as Denver looked discombobulated on offense, but it didn’t take them long to regain their footing. Following a timeout, the Nuggets began generating chances at will off of their pinpoint passing and shooting and answered San Antonio’s run with one of their own, scoring 11 straight to get back in the contest.

The game was still up for grabs at that point but the good guys just couldn’t slow Denver’s momentum and the home team stretched their lead to 15 and all but guaranteed a win. The Spurs went over seven minutes without making a basket from the end of the third quarter to the beginning of the fourth, completely losing confidence in their shooting in the process. Pop waved the white flag and subbed out the starters with 5:30 left in the game, with the Nuggets wrapping it up 106-96.

Next game: Vs. Nuggets on Friday

Denver seems to be peaking at the right time so it will be difficult to pull out a win, but perhaps the Spurs’ desperation could give them a shot on Friday.