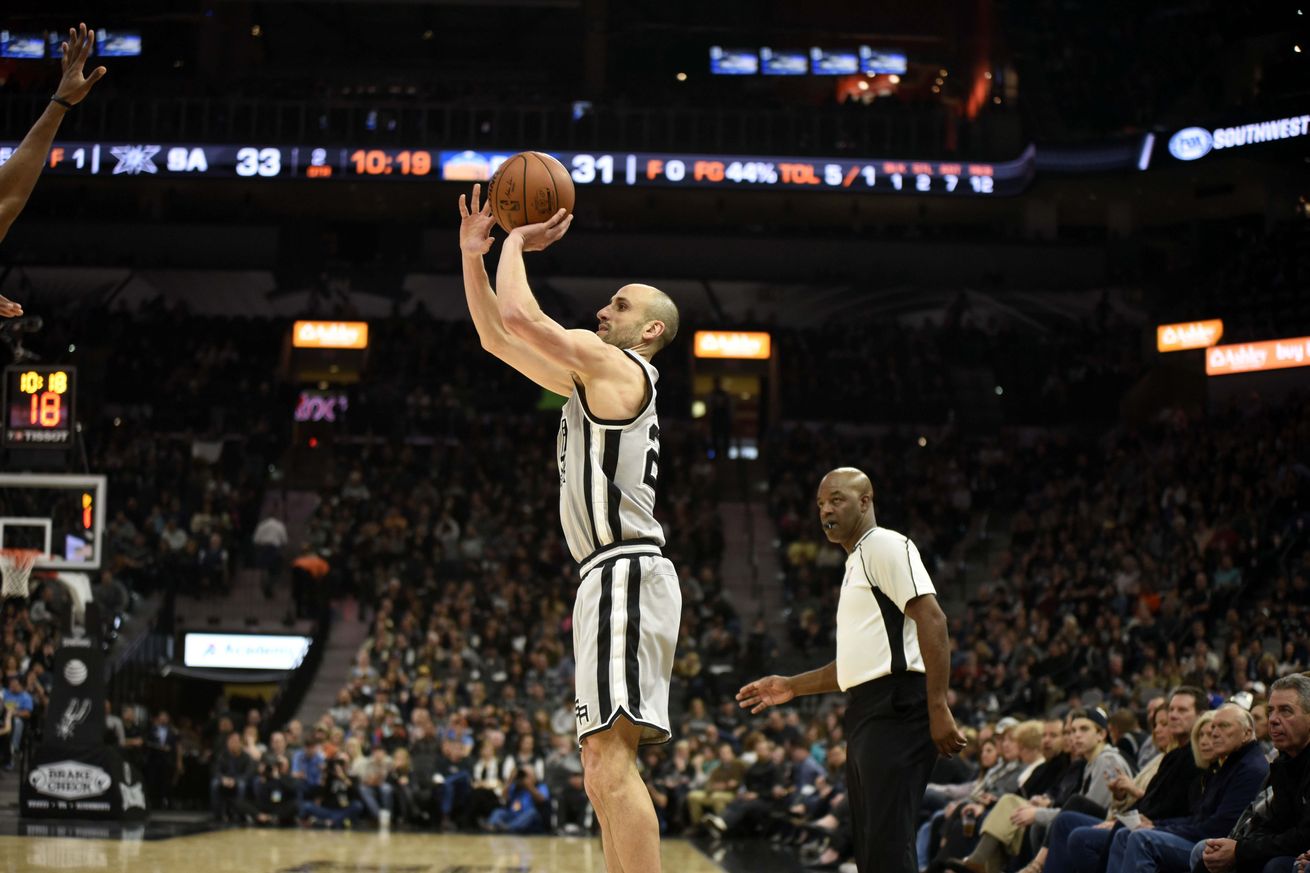 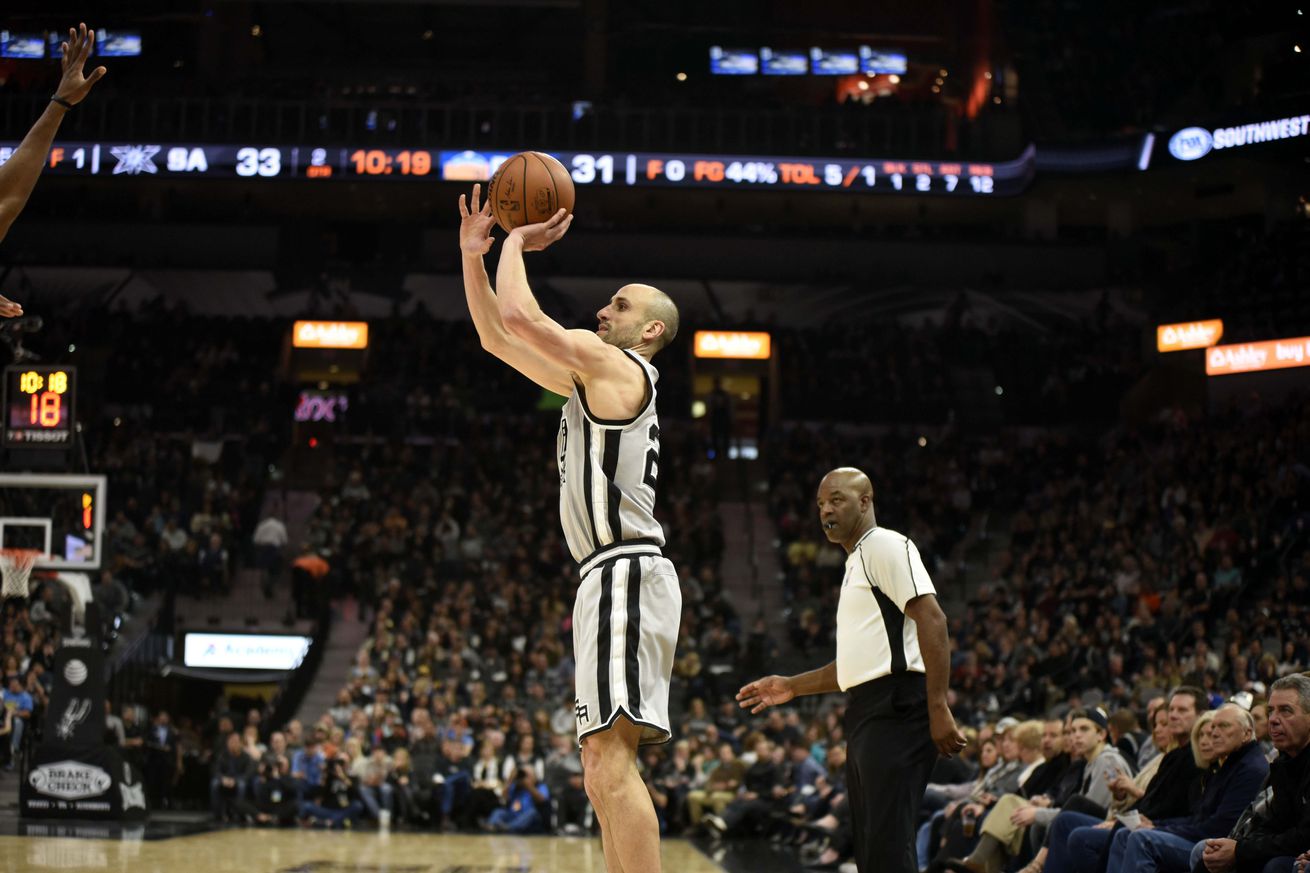 In their final game at home until March, the Spurs destroyed Denver in the third quarter to put the game away.

San Antonio beat the eighth-seeded Nuggets on Saturday night in the AT&T Center. No surprise there, the Spurs were enjoying their fourth home game in a row with no back-to-backs while the Nuggets were finishing up a tough four-games-in-five-nights stretch (FOGAFINI in the PtR vernacular). The Spurs finished the three-game season-series sweep with the win.

With the loss the Nuggets fall to 22-28 and remain in the eighth seed, though the Blazers are just a half-game back. The east currently has two teams below .500 that would be in the playoffs if the season ended right now. That doesn’t seem good.

With the win Gregg Popovich now has the most wins (1,128) with a single franchise in NBA history, passing Jerry Sloan’s 1,127. There’s no question that he’s about to have his 20th-straight winning season and more impressive than that is that it will almost certainly also be his 20th-straight season with the team winning at least 60% of their games.

After the game Nuggets coach, Mike Malone, said that the achievement “speaks to the fact he’s arguably the greatest coach the NBA has ever seen.” He continued, “Pop has had a tremendous impact on my career and I am very happy for him.”

The first half was fairly competitive, with the Spurs taking a 56-50 lead into the break behind great halves from Tony Parker and Manu Ginobili. The two remaining OG-Big-Three combined for 30 points on 10-for-11 shooting. The rest of the team went 8-for-23 in the first two quarters.

The second half was all San Antonio, with SA returning to their third quarter dominance for the second game in a row, outscoring the Nuggets 35-22 to take a 19-point lead into the final frame. Pop summed up the second half quickly:

[We had a] good second half, we had 17 assists in the second half. Big difference. Four turnovers, big difference. That was probably the ball game. [Our] defense was a little bit better. They’re a tough team to guard. I thought we focused really well defensively and it fueled a lot.

The fourth quarter was garbage time for both teams – no starters saw a second of play – and the Spurs won the period 30-25 behind 17 from Jonathon Simmons on 7-of-10 shooting. Simmons, Davis Bertans, Joel Anthony and Kyle Anderson played all 12 minutes of the quarter. Dejounte Murray and Patty Mills split the PG minutes at nine and three, respectively.

Let’s pause to watch Simmons do his explosive thing:

While we’re at it, why not a Davis Bertans jam. The Latvian has been better than expected in his rookie season, showing he’s not just a shooter.

Your Spurs improve to 39-11 with a little over a third of the season left to play. They remain pretty isolated in the two-seed out west, trailing the Dubs by four games and holding a six-game loss-column advantage over the Rockets. The Spurs also hold a four-game loss-column advantage over the Cavs for home-court in the playoffs if the Spurs find themselves in the Finals. San Antonio remains on a 64-win pace.

Manu didn’t play in the second half of the game. He finished 5-of-6 from the floor and 4-of-5 from deep to reach his season-high of 18.

Popovich didn’t take the bait about Manu turning back the clock from a reporter, responding to the prompt with, “Well, he made shots.” Pop’s the absolute best! Tony Parker was a little more impressed with Manu after the game, saying, “Manu was on fire. It looked like the old days.”

Indeed, Gramps continues to be pure joy to watch in his 15th season. I truly hope he plays a few more years. Let him play 10 minutes every other game. Why not?

Manu had himself a first half…

Throw it up, throw it down pic.twitter.com/tkeHUS0g3H

That’s it for Spurs home games until March. The Spurs will have six games in ten nights before the all-star break as they head east to take on the Grizzlies, Sixers, Pistons, Knicks, Pacers and Magic. After some time off for the all-star break the team will head to Los Angeles to play the Clippers and Lakers on the 24th and 26th of February. San Antonio will be back in the Alamo City on March 1st to host the Pacers.

That starts a home-heavy schedule for SA, with 16 of their last 24 games at the AT&T Center. The team only has four back-to-backs remaining on the schedule, with one coming on the Rodeo Road Trip.