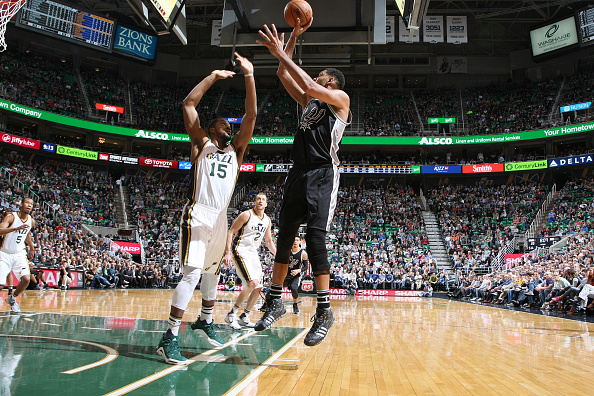 The first time the Spurs had to vacate their home arena to make way for barrel racers, bull riders, calf ropers and mutton busters during the 2002-03 season, they returned from the home court hiatus with eight wins in nine road games. There was talk of the team bonding during the three-plus weeks players and coaches spent on the road and when that season concluded with David Robinson hoisting the Larry O’Brien Trophy at what was then called The SBC Center after the final game of his Hall of Fame career, the legend of the rodeo road trip had begun.

After running this season’s rodeo trip record to 6-1 on Thursday night with a 96-78 win over a previously sizzling Utah Jazz team at Vivint Smart Home Arena in Salt Lake City, the Spurs have added another chapter to the lore of a journey that always seems to set them up for the playoffs.

Kawhi Leonard scored 29 points and Tim Duncan snapped back from just the second scoreless game of his 19-year career to get 14 points and 11 rebounds to lead the Spurs to their 21st road win of the season, assuring their 19th straight winning road record. No NBA team has strung together as many winning road records.

Duncan also blocked one shot and needs just one more to become just the fifth player in NBA history with 3,000 blocks.

Utah became the ninth team unable to score at least 80 points against the Spurs. They are 9-0 in such games and 23-1 in the games in which their opponent scored fewer than 90 points…..Read More