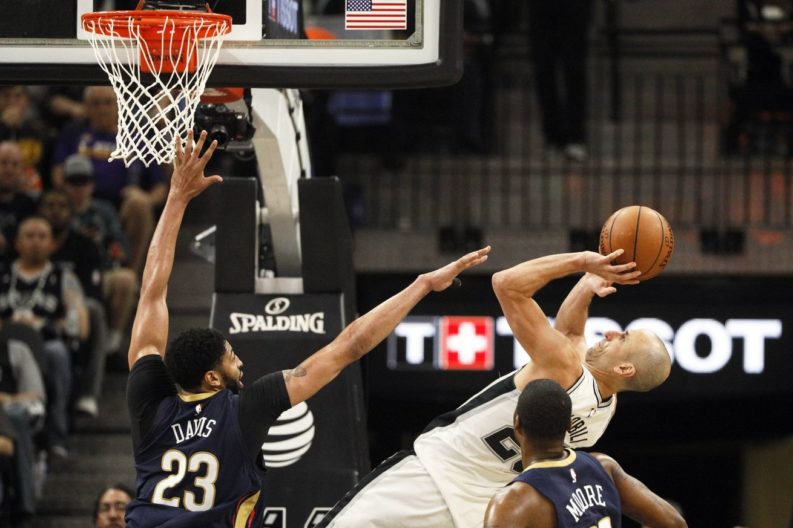 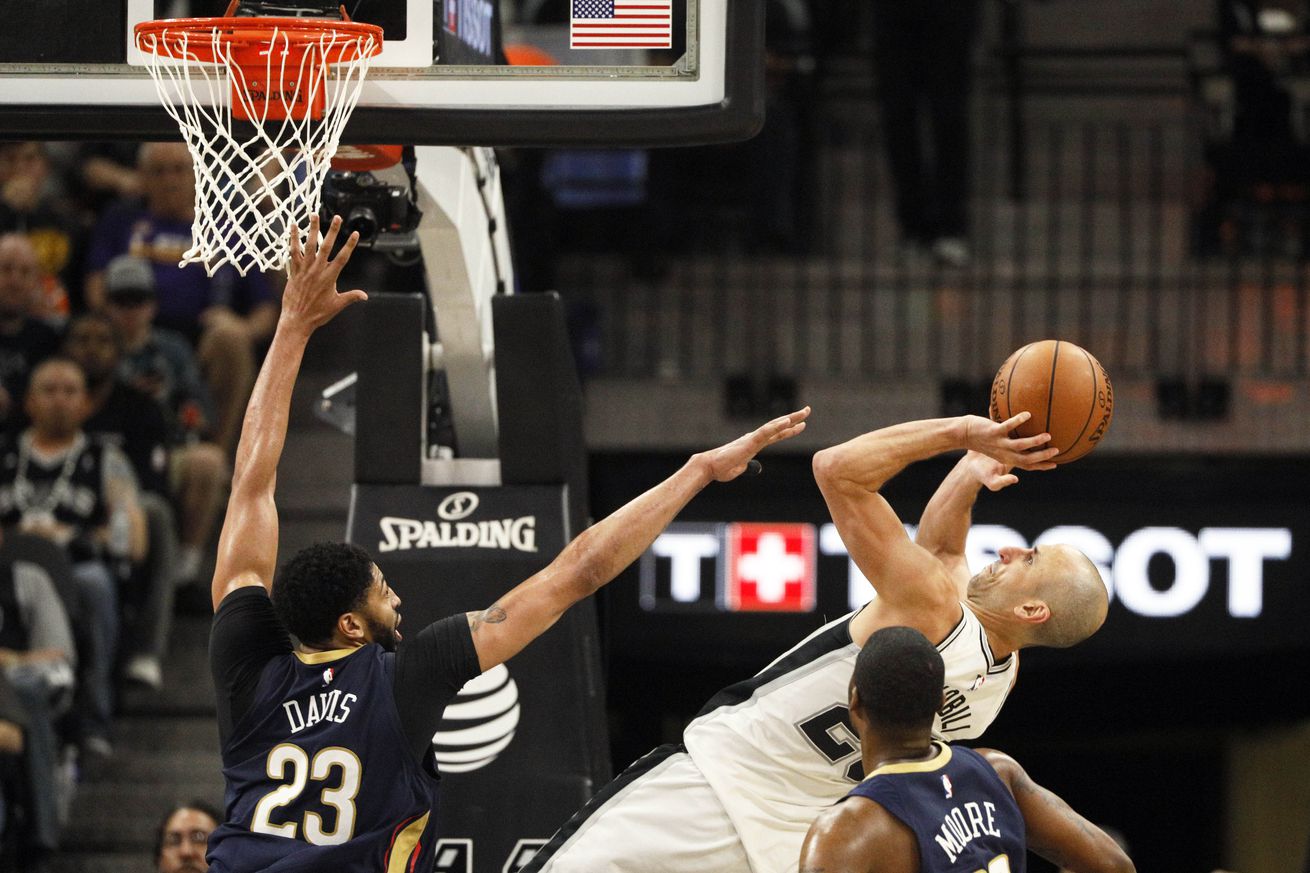 Facing another must-win scenario, the Spurs held on late while dealing a blow to a conference rival.

The Spurs’ age has shown for much of this season. In Thursday night’s 98-93 win over the Pelicans, it was their experience that shined.

With a playoff atmosphere in the air and playoff implications on the line, the Spurs leaned on their vets and defense down the stretch against an opponent they now trail by just a half game in the standings. And while their meeting two weeks ago ended with San Antonio missing its big man in the middle, this time it was New Orleans short-handed, with its transcendent center picking up his sixth foul with less than two minutes left.

LaMarcus Aldridge (25 points, seven rebounds) set a physical tone inside, shaking off an Anthony Davis block on his first touch to remain aggressive in the post. He played a team-high 38 minutes, was responsible for that all-important sixth foul on Davis, and played some terrific perimeter defense in the game’s closing minutes, including a contest on a potential game-tying corner three by Nikola Mirotic.

Danny Green, just 1-of-8 from three on the night, showed where his true value lay by notching a career-high six blocks, most coming with perfectly-timed help from the weak side, although his game was temporarily put on hold after an elbow to the face required him to get stitches in the third. Green’s shot-blocking prowess is huge for a Spurs team that is going small more than ever (Green got the start at the three for the second game in a row, with Anderson at the four and Aldridge at the five).

Meanwhile, all Manu Ginobili did was block Anthony Davis, draw a charge on Davis, coax Davis into another foul (a crucial fifth, which led to an immediate technical foul after an incensed Davis contested the call), and score half of San Antonio’s third-quarter points to help keep New Orleans at arm’s length. The stat sheet will drastically understate the emotional umph of each contribution, as Ginobili continues to be the avatar for mindful, selfless, and opportunistic basketball.

Manu with the steal and score #GoSpursGo pic.twitter.com/wbRlFmnthK

Here’s Green on what Ginobili’s performance meant to the team in the win:

“Taking charges, drawing fouls on those guys, diving on the floor—making winning plays. He hit a big shot or two here and there, and that’s what he does. When you see a forty-year-old do that, it inspires everybody to bring it.”

It wasn’t just the older dudes contributing. Dejounte Murray poured in 18 points on 7-of-9 shooting, which included a rare corner three. The 21-year-old remains a point guard more in theory than in practice right now: he had 12 rebounds and zero assists, to go with his four steals.

Unfortunately the young guard’s night was cut short after suffering an ankle injury (because it can’t be a Spurs game this season without one of those) in the fourth quarter while battling for a rebound. Things looked grim for a few moments while he lay face down on the floor, but Murray was standing and walking around shortly after. We’ll keep an eye on his status moving forward.

Dejounte Murray will be re-evaluated tomorrow. Doesn’t sound super serious, but ankles can be tricky

The game was a story of two halves, with both sides combining for 118 points in the first half and just 73 in the second. As should come as a surprise to no one, Gregg Popovich lauded the effort in the second half, which was far more to his liking:

“Well, they’re so fast they’re hard to keep up with. Their pace — we were certainly tired. They scored 58 in the first half and 35 in the second. That’s what we have to be to have opportunities to win these ball games. And after that, Manu was great — in the third quarter he blocked one of Anthony’s shots and took a charge, made a three. LA played great D in the corner on Mirotic on that lasts shot, and the group as a whole was very active. So that’s what it’s gotta be.”

The Spurs know it’s that defensive focus, paired with the urgency they’ve stressed the past few weeks, that will carry them through to the finish line.

“It’s live or die for us right now,” said Aldridge. “You gotta bring it every game. These teams that we’re gonna play, they’re fighting for their position and their lives.”

For the first time in a long time, so, too, are the Spurs. Their playoff future remains very much in the air, but they are fighting.

I don’t imagine Green will be hearing from the league for his post-game comments, but suffice it to say he was not too happy with the ruling on a third-quarter possession in which he took an elbow from Anthony Davis while contesting his shot. Instead of getting credited with the block (which would’ve been his seventh on the night), Green got called for a foul, along with a cut under the eye that required stitches.

“The referee said it was an unfortunate play. I’ve seen unfortunate plays happen where there’s still a call or where they at least look at it, but that’s the decision they make. I just gotta keep playing and play through it the best I can.”

Ginobili didn’t offer much sympathy for his stitched-up teammate after the game, but he did evoke some laughs from reporters with this quote:

“I feel like he got a little street cred now, with the scars… too cute, always with the hair so perfect. So now a good scar in the cheek bone is gonna help for his intimidation skills.”

Getting a W while dealing an L to a team you’re jostling for playoff position with is huge. The Spurs get to do it again on Saturday against the fifth-place Wolves, who they currently trail by just a game. Here’s Pop on the Western Conference playoff hunt:

“In the West, it’s tough — there’s a lot of good teams. There’s 10 or 11 of us trying to get eight spots. We know two of them for sure, those top two teams. The rest of us are all struggling to get games and each game down the stretch with everybody is gonna be what you saw tonight.”

A quiet night for Rudy

Rudy Gay played for just 5 minutes, all in the first half. He was a team-high +12 in that span but, for whatever reason, didn’t see the floor as things got, and remained, close. It could be a matchup thing or, with game packed so closely together in this stretch, it may just be a way to preserve him for Saturday night.

The starting lineup, still not set in stone

When asked about what he’s liking out of his latest starting lineup (Murray, Mills, Green, Anderson and Aldridge), Pop was quick to note that it remains very much a fluid situation, saying, “The starting lineup’s gonna change all the time.” That could mean Green back to the bench, Gasol coming back once his shoulder is feeling better, or simply the team adjusting to the opponent it’s facing.