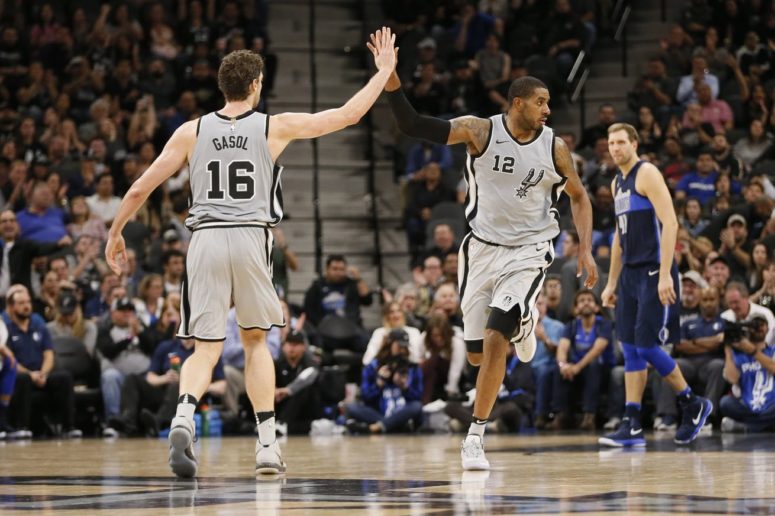 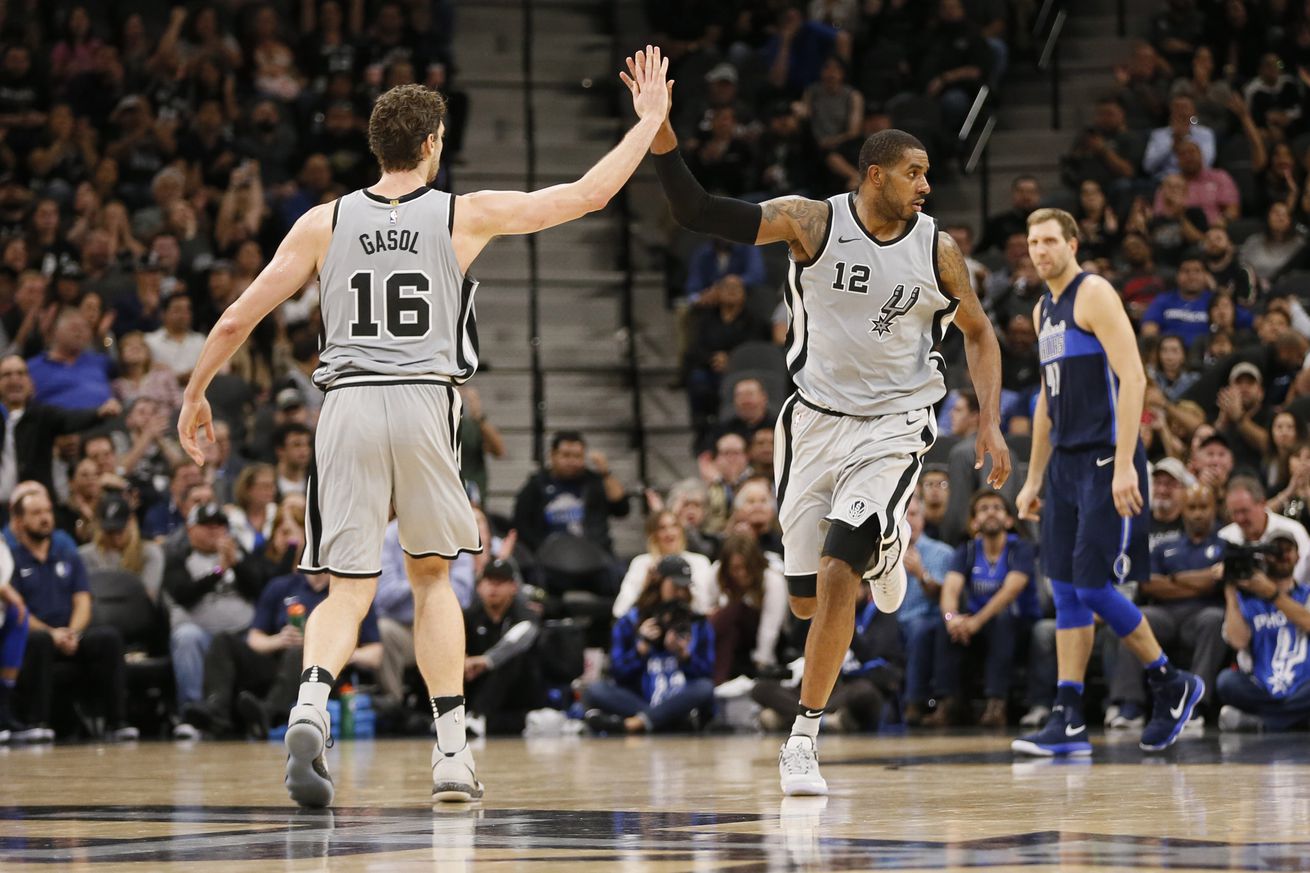 Tony Parker made a promising season debut, while LaMarcus Aldridge and Pau Gasol keyed another second-half comeback for the Silver and Black.

If you repeat the same action enough times, drill the same balletic motions into the shared space of memory between gray matter and soft tissue over the years, there’s not much that either a career-threatening injury or a prolonged hiatus can do to override it.

That was, at least, one of the things you could take away from the Spurs’ 115-108 win over the Mavericks on Monday night. The other is that San Antonio has some pretty talented big men.

With Tony Parker back in uniform (and back in the starting lineup), the Spurs appeared to pick up where they left off seven months ago, when he was forced out of the playoffs with a torn left quadriceps tendon. Their second bucket of the game came on a Parker-LaMarcus Aldridge pick-and-pop, a play that looked almost commonplace were it not for the fact that we hadn’t seen it since early May. The third was courtesy of the Wee Frenchman himself, as he curled around an Aldridge screen and dribbled into the lane, ambling at his now-customary two-thirds speed, getting Dallas’ Maxi Kleber into the air with a perfunctory pump fake, and finishing with the almost-too-easy lay-in.

Just like he never left… Tony Parker scores his first bucket of the season! #GoSpursGo

Later, he reflected on the play:

“[Pop] said, ‘Just be aggressive and be yourself, just penetrate and see what happens,’ so I just went into the paint — that’s what I do best — and he went for the pump fake, so it was a nice first basket.”

The instinctive behavior wasn’t limited to Tony’s performance. A spate of careless turnovers in the second quarter, punctuated by a bad call by the refs, elicited a familiar reflex on the Spurs’ sidelines, as Gregg Popovich, as if on cue, took to his feet, stomped towards the official near midcourt, and did enough smoldering and gesturing to receive his second ejection of the regular season. San Antonio was down, 36-24, at that point, with 7:25 still to go in the half.

For those that remained, a Popovich ejection was as strong a call to action as any —something assistant coach Ettore Messina (who took the reins in Pop’s place) noted after the game:

“You know if you see Coach Pop going out, you understand that everybody needs to step up — the fans, you and me.”

And the team responded well, narrowing the deficit to five points at the half and tightening its execution on offense. The Spurs had eight turnovers at the time of Pop’s ejection, and only two (!) in the game’s final 31-plus minutes.

Much of that was because San Antonio got back to what it does best against smaller teams this season, overwhelming their opponents with post-ups and high-low action between Aldridge (33 points) and Pau Gasol (25) and turning double-teams into open looks. The ball movement could be seen in the three-point shooting (10 of 24), as well as in the assist numbers (27 total, on 43 made FGs), where every starter had at least three.

Aldridge was once again impressive on both ends, switching onto ball-handlers, defending the rim, and providing perfectly-timed help defense. We’re 20 games into the season and LA has made as compelling an All-Star case as one could ask for while leading his team to the fourth-best record in the league. Stats like the one below help illustrate how much better he’s been in his third season as a Spur:

The Spurs-Mavs rivalry has been stripped of its enmity, and these Mavs are most definitely lottery-bound, but even an overmatched Rick Carlisle team can find a way to compete on any given night. Through some impressive guard play and good off-ball activity from Dwight Powell, Dallas managed to hang tough with San Antonio until the game’s closing minutes. Credit the Spurs for consistently having an answer, and for coming up with timely stops down the stretch.

But while their rivalry wanes, and the light dims on Dirk Nowitzki’s stellar career, the Spurs are still hoping they can get a bit more out of their vestiges of those bygone years. Parker could once again be an important part of the team’s puzzle, especially if he’s able to build on Monday night’s promising debut.

Another big effort from the Spurs bigs

The Spurs have often looked their best when they have Aldridge and Gasol both on the floor (+12.4 net rating), but Monday night was especially impressive.

Parker’s been feeling good for a while

“It’s been two weeks that I’ve felt I could’ve come back but I was just waiting to make sure. I felt great. I felt like I had my energy and tried to help the team. I’m happy we won. I was a little bit worried in the first half.”

That said, he noted that he was on a minutes restriction against Dallas, and should remain on one for at least the next few games.

Gay sat this one out, listed in the injury report as suffering from a sore right heel. It doesn’t sound like it’s anything serious, but any ding is something to keep an eye on.

Pop, on making do without Parker and Leonard

“There’s been a lot of moving parts, but I’ve gotta give our young guys and our new guys a lot of credit that they’ve blended in with the veterans. We’ve had different guys step in on different nights and score for us or make stops on defense. LA and Kyle Anderson have been real stalwarts for us. Those guys have been steady throughout this. LA’s combination of scoring and playing D, running the floor has just been outstanding. Guys like Kyle have just been special on top of it. Everybody else has contributed. It’s a good solid group of people and they’ve hung in there pretty good. Hopefully we can continue to do that until Tony is full speed and Kawhi is full speed.”

“He’s getting very close, and making progress. He’s having contact now, and hopefully we’ll get him back shortly.”

(Laughing) Is that Dr. Parker? I’m probably not gonna consult Tony on when Kawhi is gonna come back.