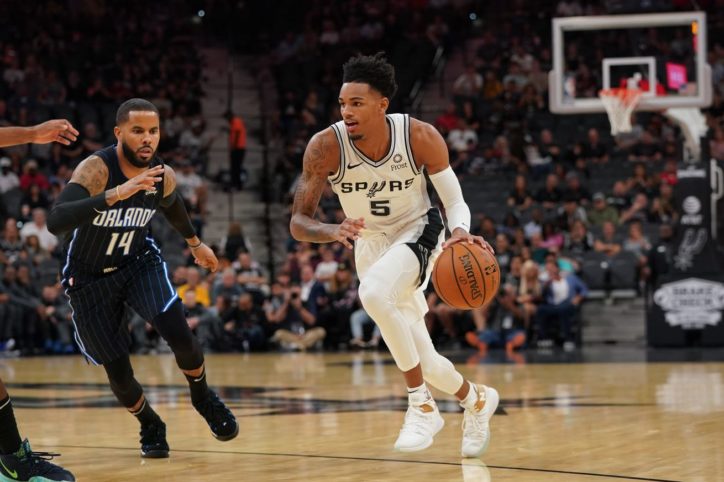 Bryn Forbes got hot, a handful of vets got the night off, and Dejounte Murray showed out in his long-awaited return. Also, the Spurs lost by a lot.

I’ll try not to bore you with the facts — not the countable kind at least. While exhibition games are already best taken in with a heavy dose of nihilism, the Spurs’ preseason opener against the Orlando Magic was in particular a mostly symbolic affair, a chance to find meaning in change, joy in reunions, and a vague sense of what’s to come.

We saw the broad brush strokes of last night coming, even if it was always going to be feel different to witness them ourselves. Imagine a TV show that once seamlessly turned over from season to season, and then recall the point when the young lead is now the hip new vice principal.

It wasn’t just the sight of Coach Tim, who hit the court an hour or so before tip-off to warm up former teammate LaMarcus Aldridge, that reinforced the Spurs: The New Class vibes we’re settling into, or being reminded of exec Brent Barry, minority owner David Robinson, and contented civilian Manu Ginobili who were all in attendance. There are now Dejounte Murray and Lonnie Walker jerseys sprinkled throughout the AT&T Center, new names on familiar gear to balance out the familiar names wearing new gear.

By design or not, Gregg Popovich let his young guys take center stage for most of Saturday night. With a handful of veterans (which included summer signees DeMarre Carroll and Trey Lyles) getting the night off for rest, the offense played largely through Murray (starting in his first NBA action in a year) and Derrick White. Both players did their best under their own respective conditions — Murray finding his footing after a long hiatus and White playing with a hodgepodge of second- and third-unit guys — but the end result was not, collectively, the kind of basketball this team will hope to carry over to the regular season. Miscues on turnovers were compounded by poor transition defense, and few possessions proved fruitful outside of simple pick and rolls or plays in the open floor. The game hit extended garbage time somewhere around the midpoint of the 3rd quarter. Were it not for a lights-out night by Bryn Forbes (24 points on 9 of 13 shooting), things could’ve gotten ugly even earlier.

By then, though, many fans had seen what they wanted to see out of the rehabilitated Murray, who made the most of the ball in his hands in DeRozan’s absence. His first play of the game was a simple pick and pop with Aldridge, who seemed to bring back one of his pet habits from last season: the token first quarter three-point shot. It went in, Aldridge’s only trey of the night, and the first of 4 assists for Murray.

Understandably Murray’s return to organized play following an ACL injury wasn’t without a few hiccups. He immediately followed up the assist with an airball from the top of the key and then an errant pass to Aldridge on a similar action on the opposite side of the court. He picked up two personal fouls within the first few minutes of the first quarter, and seemed at least a little tentative on how to handle contact around the basket. He picked an opponent’s pocket in the backcourt only to fumble the ball as he gathered for a layup and was then blocked at the rim by Mo Bamba after collecting himself.

Had that been the story of Murray’s night, there’d be no reason for concern — it’s been a while. But fans should largely be encouraged by what the 23-year-old guard showed, from his improved shooting stroke (he took a pass in the 2nd quarter and didn’t hesitate to pull the trigger on his only three of the night) to his overall fluidity and burst on the floor. He aimed to push the pace whenever he could and wasn’t shy about dribbling into the defense, finishing on a nifty up and under move once, getting to the line another time, and hitting the deck on more occasions than that.

If there was one quantifiable fact from the loss to the Magic, it’s that last point. For every time Murray fell, he got back up. After what happened 12 months ago, that means a lot.