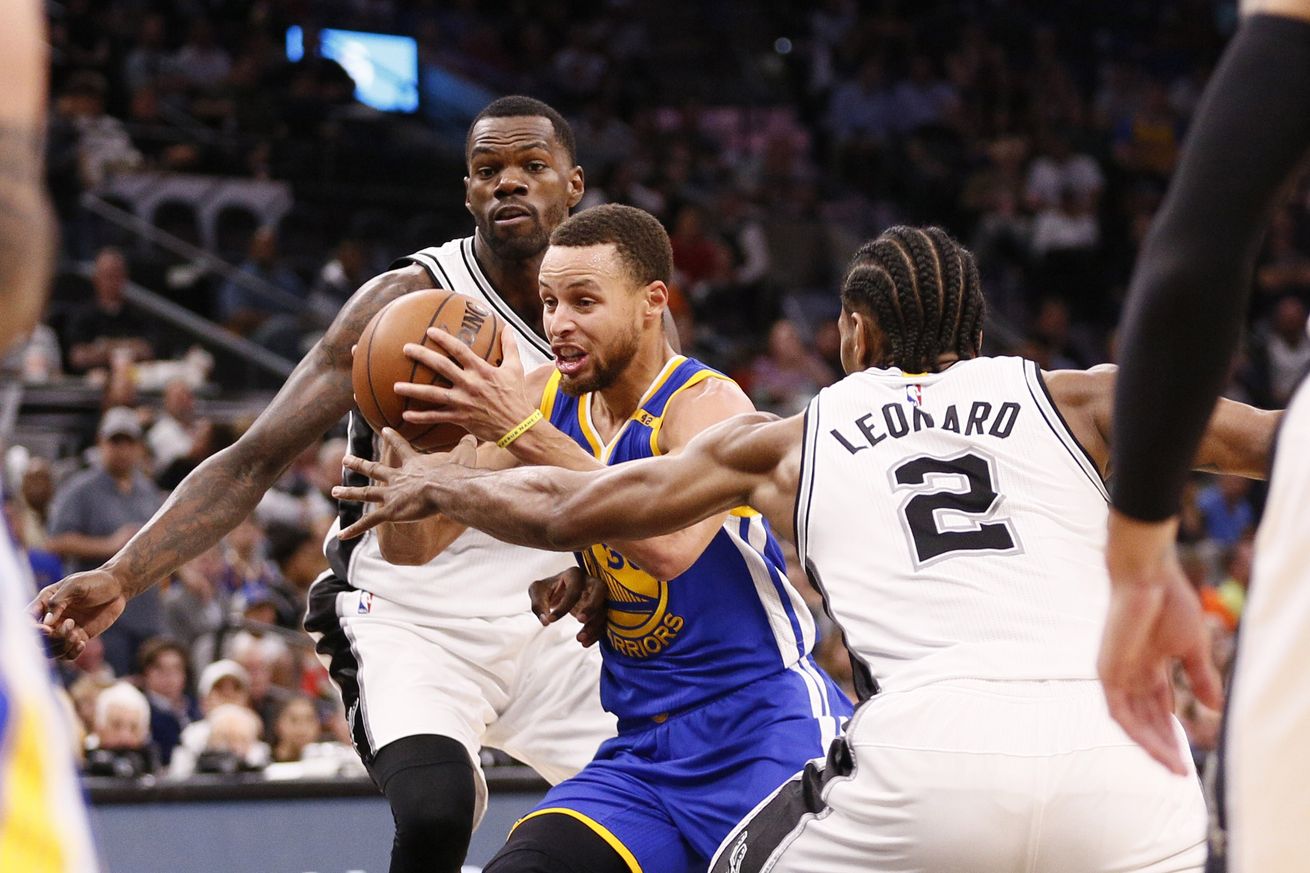 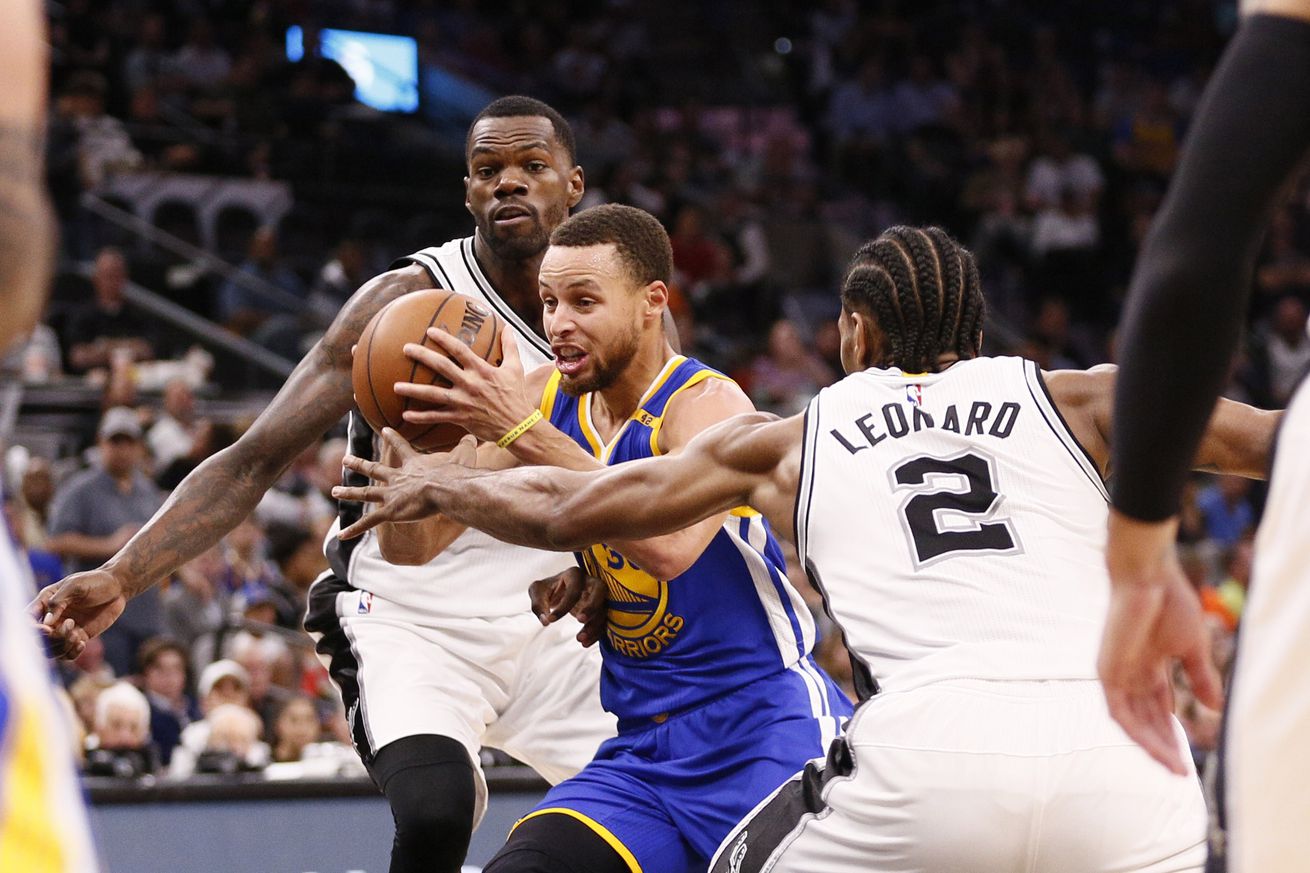 A wild game that saw a 36-point swing did not go well for the home team.

The Warriors are something else. Missing their best player in Kevin Durant they erased a 22-point deficit and took a double-digit lead of their own against a very good Spurs team and showed why they’re the best team in the association.

The Spurs started this one out on a tear, taking a 15-0 lead behind three triples from Danny Green before the Warriors finally hit a shot, a Stephen Curry three. It was 23-3 as the Spurs held the Warriors to just three points in the first six minutes of the game, which has to be a season-low for Golden State.

Things went much better for the Warriors for the rest of the quarter, Andre Iguodala scored seven for GSW in the last two and a half minutes of the quarter, and the Spurs held a 33-17 advantage after one.

The Warriors continued their solid play at the beginning of the second with a 10-4 run without Curry or Green on the floor and cut San Antonio’s lead to 10, reiterating the fact that a 20-point lead on the Dubs does not guarantee victory.

The Spurs lost their offensive game, credit the Dubs’ defense, in the second while Golden State caught fire. It was the biggest negative turnaround in a game this season for San Antonio with the Warriors climbing all the way back to tie the game before going into the half trailing San Antonio by just three, 57-54.

The Spurs turned the ball over six times in the second and hit only 42% of their shots while the Warriors took care of the ball (two turnovers) and hit 58% of their shots.

The third quarter started off where the second left off, with Golden State knocking down shots while the Spurs did things like fail to get a shot off in 24 seconds. The Dubs went up 62-57 three minutes into the half on a Curry three that prompted a timeout from Gregg Popovich.

That didn’t help much with the Warriors continuing to put it on the home team to the tune of a 13-2 run to start the third. The Spurs have struggled against elite defenses this season. The Warriors would lead by eight at one point before the Spurs pushed back a little and tied it up on a LaMarcus Aldridge and-one dunk in transition with three minutes left in the quarter.

That was the highlight of the quarter for the Silver and Black as they trailed by seven going into the final period after a 12-5 Warriors run.

San Antonio’s offense got it going to start the fourth but they couldn’t get any stops and a bucket-for-bucket game didn’t do much for San Antonio. They did cut it to four on a Manu Ginobili triple with eight minutes to play but Klay Thompson immediately responded by drilling a well-defended triple.

That was about it. Golden State pushed it to double digits and kind of cruised to the win. Which is absurd when you think about how the game started. Of course, by the fourth, the first half of the first quarter seemed like it had happened months before.

The loss could be a good thing for the Spurs with the one-seed now out of reach. It will allow the team to rest guys down the stretch for the playoffs, something that will certainly help Kawhi Leonard, who has had to do too much for the team for much of the season. He’s looked a bit fatigued for the past couple of weeks. I’d expect him to miss two or three of the remaining eight games with the rest of the team getting some rest as well.

All that’s left now is to wait and see who ends up in the seven seed for the first-round matchup.

Your Spurs fall to 57-17 and are now three games back of the one seed with the Warriors having only seven games left. The Spurs would have to win out and have the Warriors go 4-3 to finish the season to get homecourt. That’s not happening.

The four-game homestand is over and the Spurs will travel to Oklahoma City to take on the Thunder on Friday night. The team will be back in San Antonio for a Sunday matinee against the Jazz that starts at 2:30 Spurs time. The playoffs start two weeks from Saturday.