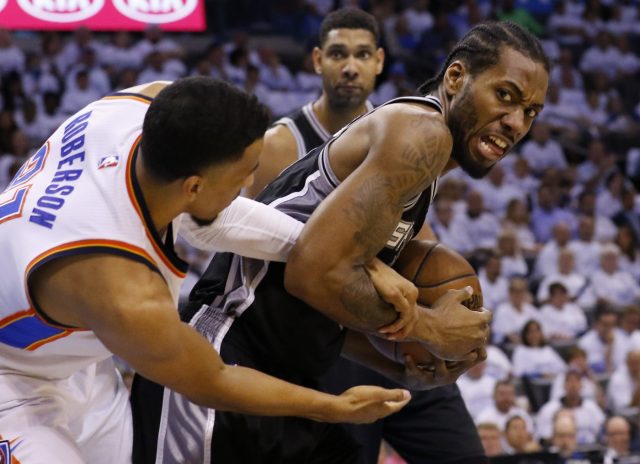 In many respects this was a topsy-turvy game with the San Antonio Spurs and Oklahoma City Thunder switching their normal game plans.

For example, whereas San Antonio’s ball movement was spotty, Oklahoma City’s half-court sets featured all kinds of weak-side action and dive cuts, as well as kick-out and drop passes. The proof of this is the discrepancy in team assists — 23 for OKC to only 12 for SA.

Another indication of this switcheroo was San Antonio’s running 31 isos:

35 points on 31 do-it-yourself situations is a healthy return, but the cost was a mostly stagnant offense.

On the other hand, the Thunder only ran 12 one-on-one plays, 10 of those for Kevin Durant that produced 10 points.

What else went wrong with San Antonio’s offense?

Three offensive fouls. Two shot-clock violations. Shooting only 2-12 from downtown. Missing numerous open mid-range jumpers and 12 layups. Plus, the Thunder keyed on Danny Green and succeeded in holding him scoreless — which, in turn, allowed the rest of their defense to sink into the paint.

Blame the Spurs for perhaps feeling overconfident only because of their cruise in Game 1 and the combination of their excellence and OKC’s stumbling as Game 3 raced to the finish line. And not because of satisfaction in winning Game 3 to “regain” the home-court advantage. In fact, at this level of play, all the talk about the importance of the home-court advantage is media-created nonsense.

For sure, while the Spurs failed to play with their usual pace, spacing and precision, the Thunder’s ball-hawking defense deserves most of the credit for this.

Moreover, OKC also overwhelmed the Spurs in two other critical aspects of the game……Read More

Source: Rosen – Spurs Not Themselves In Game 4 Loss To Thunder – TFB