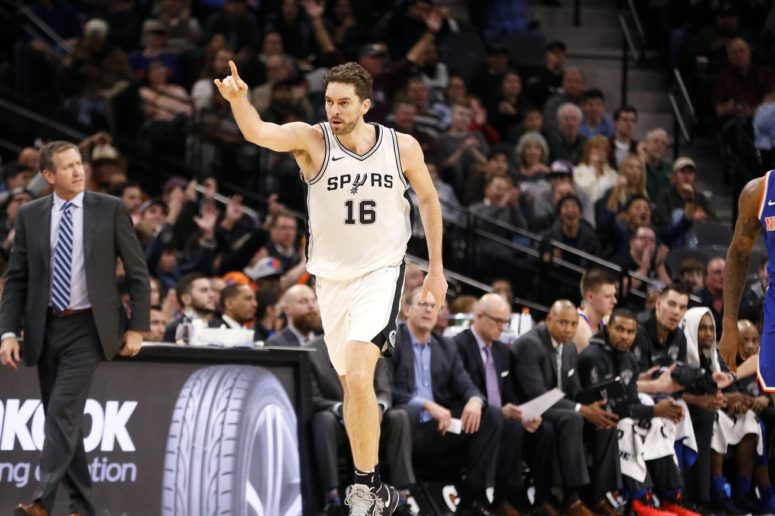 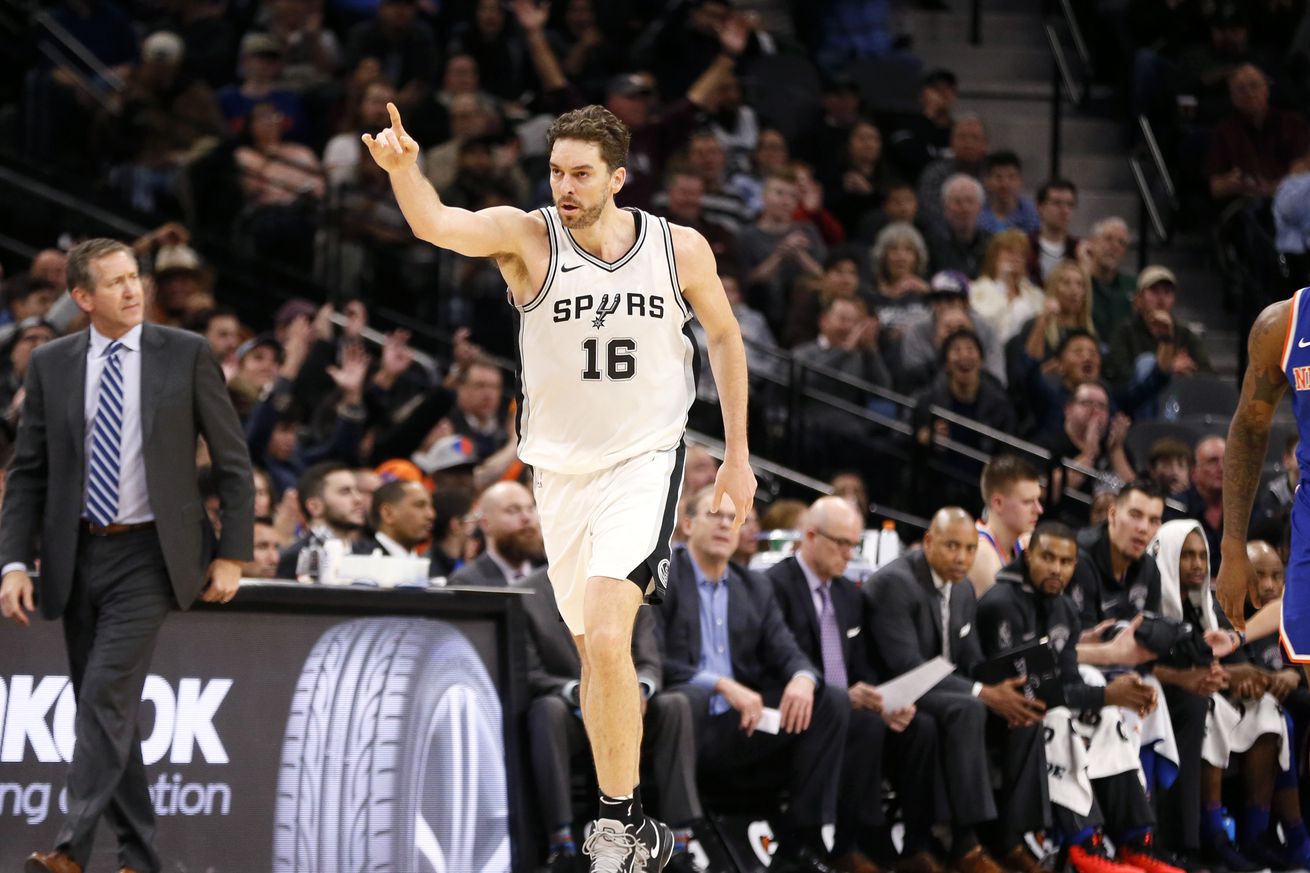 Kawhi Leonard was a late scratch and Rudy Gay got hurt, but another strong second-half performance was enough to push the Spurs past the visiting Knicks.

The Spurs have made a habit of improving as games go along, a trend that continued on Thursday in a 119-107 win over the visiting New York Knicks.

Sometimes the recipe for success is buried in an unlikely rotation Pop unearths, or at the bottom of another bottle of Grandpa Juice; against the Knicks it was simpler, with the starters doing much of the heavy lifting and providing stability on a night when the team was without two of their best bucket-getters. The five-man group combined for 87 points and posted a net rating of +35.9 (and 0 turnovers) in 12 minutes of sharing the floor.

Spurred by Tony Parker’s 14-first half points, it was the bigs that, once again, set the tone throughout. Pau Gasol (17 points, 11 rebounds, 7 assists) was his usual renaissance man, while LaMarcus Aldridge (25 points, 5 rebounds, 4 assists) remained aggressive in the paint, battling for every inch of space and contributing heavily to the fouling-out of Latvian wunderkind Kristaps Porzingis (18 points, 7 rebounds, 6 blocks) late in the game.

With the win, Gregg Popovich moved up the all-time coaching leaderboard, tying fifth-place George Karl at 1,175, but you wouldn’t have known that from watching him after the game — not by the way he roasted reporters and focused on the nuances that keyed his team’s second-half surge.

Some numbers matter, even to San Antonio, but the Spurs have a way of minimizing the quantifiable and maximizing the intangible. Which is why you heard a lot more LaMarcus Aldridge and Gasol’s improved chemistry, or why Pop bristled at the notion that Danny Green (15 points on 5-of-8 shooting) had played better than usual on Thursday “just because he’d made a couple of shots.” Stats provide watermarks at times, but it’s habits, communication, and execution the team is looking to build on.

You can expect a certain level of equivocation from the Spurs when it comes to discussing their individual numbers, and Gasol, despite this being only his second season with the team, is about as Spurs-y as they come. The 37-year-old center continues to be one of the team’s most integral pieces, and only a fraction of his contributions on both ends of the floor appears on the box score.

The same can usually be said of Anderson, who started once again in place of Kawhi Leonard. Anderson attempted (and made) just four field goals in the game, but finished with 16 points thanks to an 8-of-8 night from the free-throw line. He was active on both the offensive and defensive glass, and provided some much-needed size at small forward against a New York team that had exploited positional matchups in the first half. When asked to describe Anderson earlier this season, Pop sneered, then plucked the word “ethereal” from somewhere inside his frosty head. In jest or not, the word accurately captures not only Slow Mo’s leisurely gait but his way of intangibly affecting a game. He had a team-best +27 net rating on Thursday.

With the win, the Spurs improved to 17-2 at home and 25-11 on the season, sitting just a game-and-a-half behind the second-place Rockets. Not that those numbers may matter much to some people around the organization.

Leonard, who was listed as probable heading into Thursday, could be seen shooting around before the game, but must not have been feeling as good as he or the Spurs training staff would have liked. You could panic at him being a late scratch, or you could see his initial listing as a bit overly optimistic and sync up with Danny Green’s suggested timeframe that this team expects to be at full strength by the All-Star Break.

Speaking of injuries, Rudy Gay left at the end of the third quarter after appearing to re-aggravate a heel that’s held him out of games earlier this season. He left on his own power, but the news that broke after the win does give some cause for concern.

Rudy Gay (right heel) was in a walking boot leaving the arena. Scheduled to have an MRI tomorrow. #Spurs

Just as everyone appeared to be getting healthy again, too.

Pop isn’t one to entertain hyperbole or questions that he considers leaps in logic. So, it probably means something that he was willing to discuss the growing similarities between Slow Mo and Bobo after the game:

“[He’s of] the same ilk for sure. Boris had a little bit more experience. He had that post-up game to go with it — that big booty. But Kyle plays the same way, he understands what’s going on on the court, moves the basketball, gets things done.”

Want to become a master of hitting impossible shots like LaMarcus? Here’s one way to practice, maybe:

LaMarcus with his one-knee pregame routine. Got this one to drop on the second try. pic.twitter.com/ZVqBcqyKL6

This seems to be a thing now, and I don’t think it was at the start of the season. Now everyone is in on it, with the production crew recording Aldridge as he begins his stretches, right through until someone hands him a ball and lets him fire away, always off one knee. Some nights he gets it off the first try; tonight he got it on the second. Not too shabby.