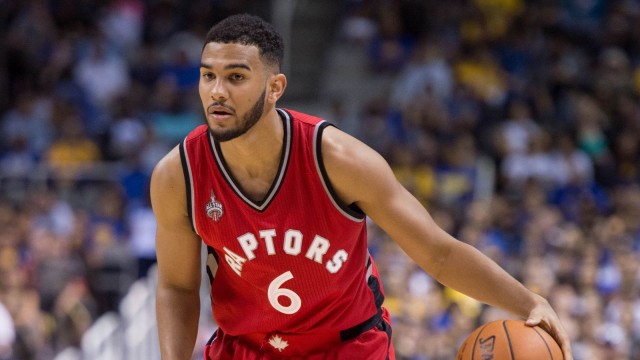 TORONTO — Cory Joseph would love to still be a Spur. The Spurs would love to still have him on the roster. Sometimes, these things don’t work out. When staying in San Antonio became impossible for Joseph last summer — when he became a collateral loss to the Spurs’ pursuit of LaMarcus Aldridge — he did the next best thing. The four-year, $30 million deal Joseph accepted to play backup point guard for his hometown Toronto Raptors was quite a consolation prize. “To get LaMarcus Aldridge, they had to free up some (salary cap) space, and I was one of the guys they had to let get free,” Joseph said Wednesday before his first game against his old team at Air Canada Centre. “There’s no hard feelings. If I was in their position, I would do the same thing.” Joseph grew up in Pickering, Ontario, a 30-minute drive into the suburbs from downtown Toronto. The No. 29 pick in the 2011 draft after one college season at Texas, Joseph spent his first four NBA campaigns backing up Tony Parker and was a key member of the 2014 championship squad. In his first 22 games with the Raptors, Joseph averaged career highs in minutes (26.3 per game), scoring (9.8 points per game) and assists (2.9)…….Read More