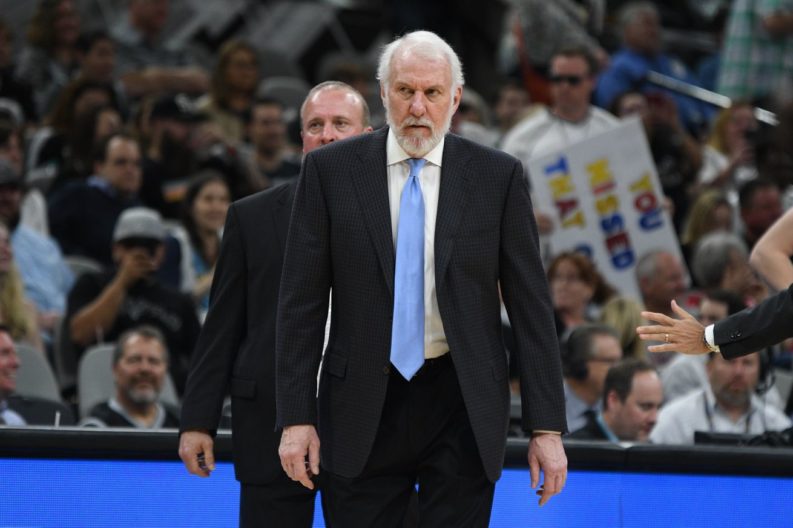 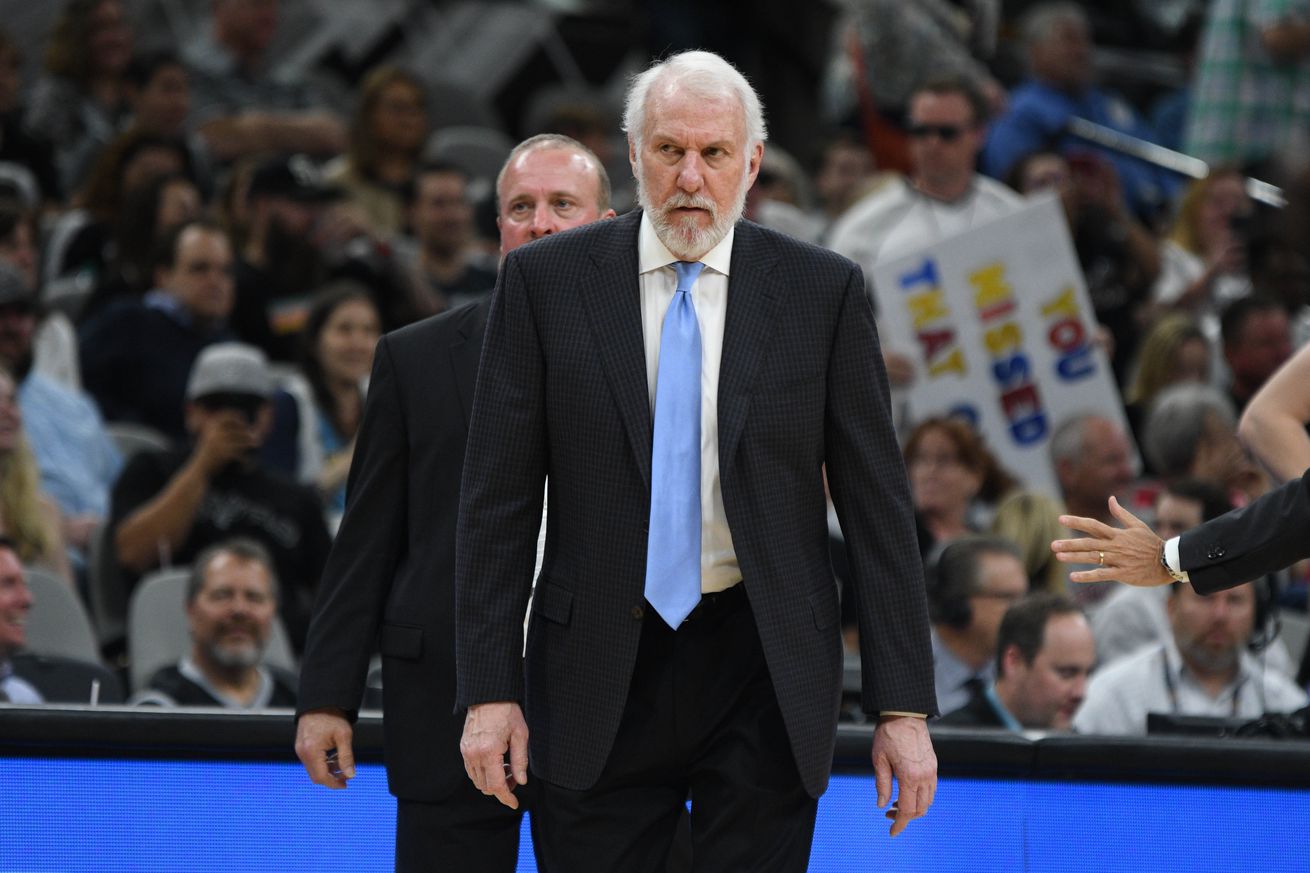 Down three starters and their head coach by the second half, the Spurs (at least, the ones still left standing) fell just short against Anthony Davis and company.

In the second half of their 121-116 loss to the Pelicans, Pau Gasol was seated next to assistant coach James Borrego, sporting a navy blue blazer and umber pants instead of his uniform. At the other end of the bench sat Kawhi Leonard, also in street clothes. LaMarcus Aldridge was in the locker room, lost to a sprained right ankle in the second quarter. Joining him 47 seconds into the third quarter was head coach Gregg Popovich, tossed following a vitriolic outburst that earned him two technical fouls.

And yet, the Spurs — stripped to little more than their very essence of rote execution and mindful opportunism — looked like an automaton that could function with whatever parts remained on the floor.

There was Rudy Gay, in only his third game back from a heel injury, filling in at center against Mr. February Anthony Davis. (Davis was held to 26 points on the night, thanks in part to Aldridge’s excellent defense in the first quarter) Gay paced the Spurs with 19 points, five boards, four assists, three blocks and one steal, looking every bit like the piece that PATFO may have believed could put this team over the top and into title contention.

There was Dejounte Murray (18 points, nine rebounds), showing more flashes of the star he could be developing into faster than anyone had imagined. He was a blur in the open court, at one point freezing Rajon Rondo with a cross-over that forced him into an intentional foul lest he give up an open drive to the rim. Murray also showed good poise in the half-court. Here, he found Gay for a terrific finish for one of his five assists, on what appeared to be a standard drag screen for Davis Bertans.

It’s official. I have a new favorite pet play. Check it out. I don’t even know what to call it, but I already love it. pic.twitter.com/PrGYlm6LDD

The future Hall of Famer now backing up Murray, Tony Parker, also had his moments, pouring eight straight points in the fourth quarter behind a flurry of mid-range pull-ups that made it seem possible that the Spurs could hold onto their lead until the end.

While Parker turned back the clock, teammate Manu Ginobili made us (again) rethink the entire concept of time, draining shots over the outreached wingspan of Davis and going directly at him off the dribble. He had 17 points and three assists in 20 minutes of action. Even Joffrey Lauvergne, the only true big man left for San Antonio, had his moments, chipping in 14 points and seven rebounds off the bench, and the Good Guys were still up by as much as 13 with four minutes to go in the third.

But welcome to the dystopian, Black Mirror version of Spurs basketball, where every -ism you’ve come to know and trust is now working against you.

As admirable as each next man performed in stepping up, many revealed their shortcomings when things mattered most. Lauvergne, of course, gave up the crucial offensive rebound to the more physically gifted Davis after Jrue Holiday missed two free throws, because that’s what mortals do. That became the difference between the Spurs having the ball down one and down three. Then, instead of that final, potentially-game-tying possession going to Kawhi Leonard, it was Patty Mills, who was unable to convert on a three from the top of the arc. The team’s lack of size in the paint made defensive rotations a problem with every dribble penetration by Holiday. Even assistant coach Ettore Messina, the elite basketball mind who assumed the reins after Pop’s ejection, appeared guilty of an oversight, asking the shortest man on the team, Mills, to inbound the ball in the game’s final moments, resulting in a turnover.

Every game matters heading into March, and the Spurs find themselves walking on the finest of razor’s edges. They’re a half-game behind third-place Minnesota (38-26) and a half-game ahead of seventh-place Oklahoma City (36-27), with Denver and Utah also in the hunt.

Customary logic would lead you to think San Antonio will be fine and string along enough wins to, in the least, be playing into late April. Yet there doesn’t seem like much fans can take for granted, given the turns this season has taken.

The big hole in the middle

Gay and Lauvergne did all they could in the second half, but you’re going to find a hard time winning without an impactful big man — especially when you’re facing Anthony Davis. With no Gasol or Aldridge, San Antonio gave up 70 second-half points, and 68 points in total in the painted area, with many of the game’s decisive final buckets coming as a result of poor defensive rotations and an inability to protect the rim.

Both Gasol and Ginobili offer some of the most intellectual and considered responses I’ve ever heard from a basketball player, but Murray might be my favorite quote on the team right now, given his age and the large role he’s stepping into.

“We lost. It’s tough, because I know how hard we were playing. I don’t buy into who’s out on the floor, who’s hurt. As I’ve said previous times, we’re pros, so it’s always the next man up, and you’d love to have your star player or whatever, but we lost. I feel like we had this game in our pocket. We could’ve controlled it better and won the game, but we lost. It’s good to see good things happen, but at the same time, it’s winning time.”

Here’s Pop, speaking before the game, on the decision to keep the Aussie guard in the starting lineup:

“He’s a good shooter. He helps us get off to a good start, spreads the court for us.”

There is of course more to it than that, because there has to be. Mills and Green are both capable floor-spacers, averaging close to the same percentage from beyond the arc this season — Mills at 38.9%, Green at 38.2%. My guess is it might have more to do with Mills’ better fit alongside Murray (the duo had a +9.2 net rating heading into this game, vs +3.8 when it’s Murray and Green), or his worse fit alongside Parker (-0.3).

Gasol, who hurt his knee on Sunday against Cleveland, sat out Wednesday’s game against New Orleans. Here are Pop’s pre-game comments on his center:

“It’d be somewhere in between [long-term and day-to-day]. Just hyperextended, and it’ll take time. He’ll get better, I think, pretty quickly.”

Another update on Gasol came after the game, courtesy of the San Antonio Express-News’ Jabari Young, as he reported on Aldridge:

Told LaMarcus Aldridge could have an MRI tomorrow on his right ankle. Meanwhile, Gasol had an MRI on his knee, no structural damage. #Spurs

It sounds like Gasol will be back sooner rather than later, although those words have taken on a new meaning for me after this season. Here’s hoping for more good news tomorrow with Aldridge.