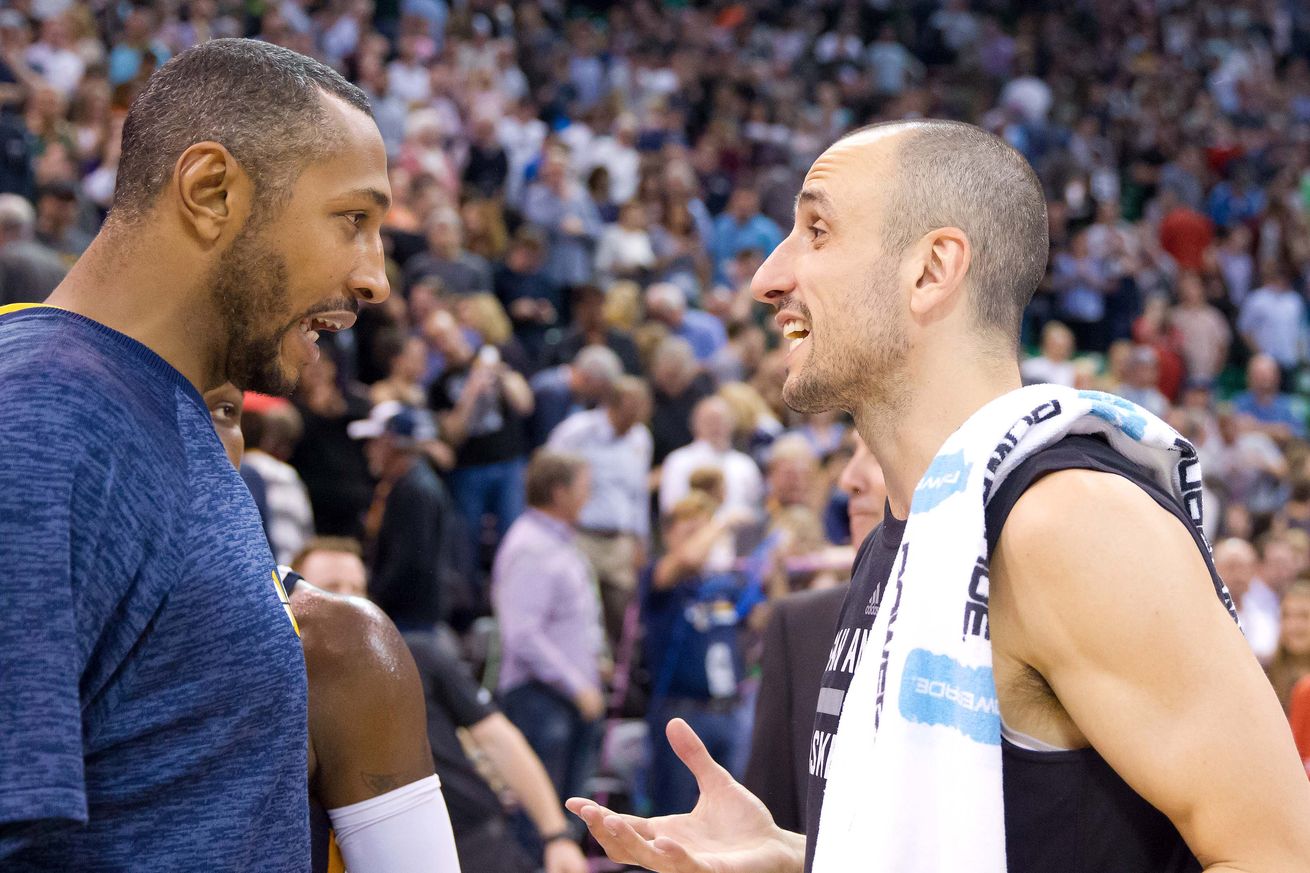 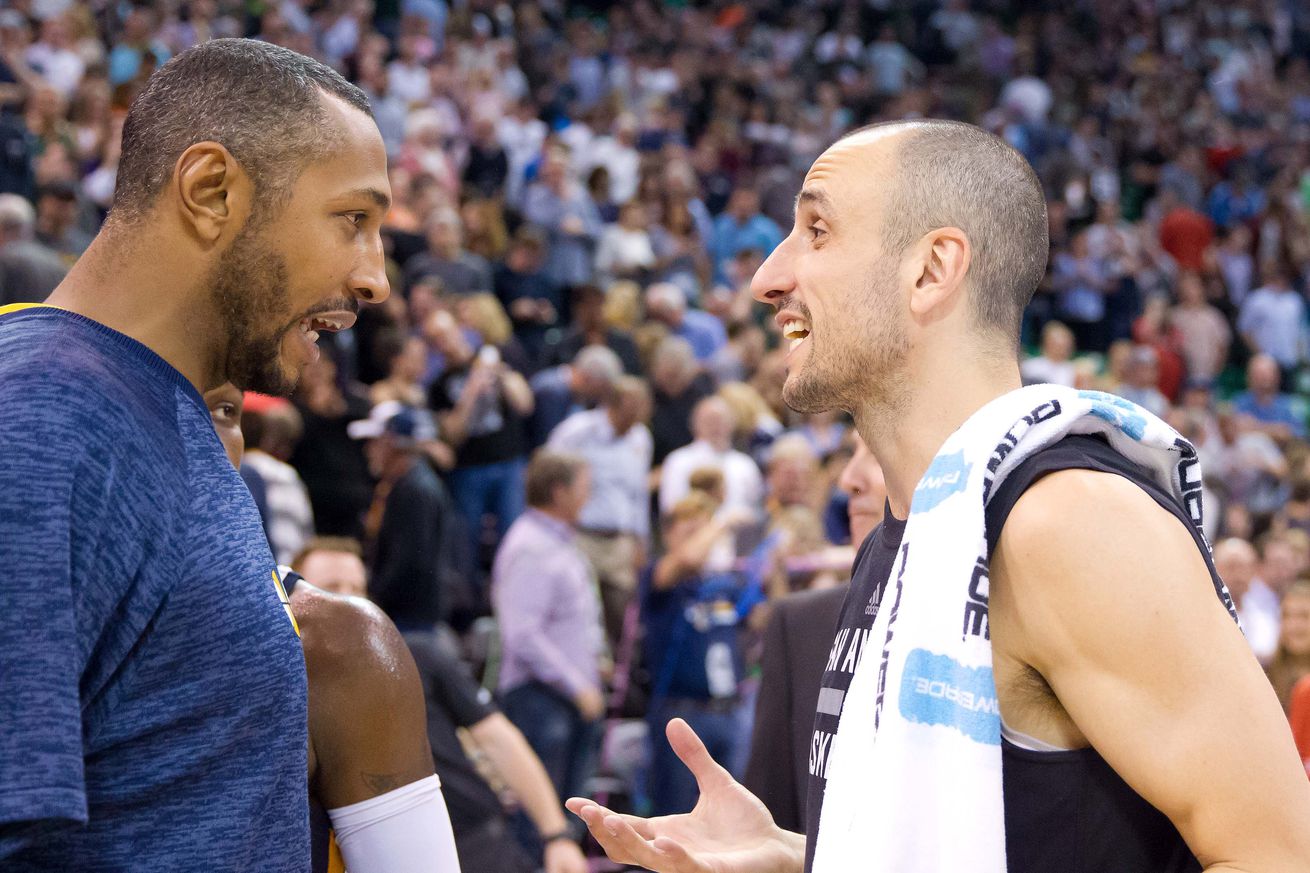 Hey, they ended last season on a three-game losing streak too.

How you felt about Game 82 at Utah as a microcosm of the season as a whole probably says a lot about your personality as a Spurs fan in general.

You can take heart at all the positives:

No one got hurt. (Never, ever take that for granted, with this team.)

Even with the loss, they still finished with 61 wins, which is a helluva lot more than I figured they would without Tim Duncan. They easily attained the second-best record in the league, despite having only one All-Star, which is a remarkable accomplishment.

Kawhi Leonard singlehandedly gives them a chance to compete in any given game.

The team as a whole has shown amazing resilience —what Gregg Popovich calls “stick-to-it-ive-ness” and has demonstrated, time and again, the ability to come back from considerable deficits. They came back from 16 down in the third quarter to take a late lead tonight.

LaMarcus Aldridge finished his regular season on a high note, leading the club with 18 points on 9-of-14 shooting, while adding three steals and a block on the other end.

Tony Parker showed some life in his legs with 14 points in 24 minutes on 5-of-8 shooting, most of it coming against one of the best if not the best defense in the league, with former teammate George Hill checking him and fellow countryman Rudy Gobert manning the paint. the best defens

Pau Gasol capped off a better season in San Antonio than most naysayers anticipated he’d have at 36, and eclipsed the 20,000 point plateau with 13 off the bench against the Jazz.

Manu Ginobili had another one of his patented you-steal-one-off-me-and-I’ll-immediately-steal-it-back-off-you sequences that never fail to delight me. He still does that stuff, even at 39.

Uh, did I mention that no one got hurt? Not that we didn’t tempt fate, by the way. Pop actually checked Ginobili back into the game with 4:21 remaining, briefly causing me to “go Serbian” at my television, but Ginobili immediately took a foul and I think he thought better of it, quickly pulling him in favor of Jonathon Simmons.

Oh, and the Spurs may have a secret weapon for the playoffs, but we’ll get to that in a second.

Now for the ugliness. Popovich told the press after the home loss to the Clippers that he wasn’t happy with the team’s effort and intensity going down the stretch and that he’d be using the regular rotation for the final two games to get things ironed out for the playoffs. The Spurs then responded by losing to Portland’s scrubs on Monday and then looking decidedly inferior to Utah in this finale. If you knew nothing about the standings and the context and were informed while watching the game that one of these teams was the second-seed and the other one was the fifth, you’d have responded, “How the heck did the Spurs win enough games to finish fifth?”

There were sloppy turnovers. Soooo many sloppy turnovers. On the second possession of the game Dewayne Dedmon was at the high post, trying to take Hill off the dribble, with predictable results. At one point later in the quarter I swear Danny Green tried a running hook shot. Even Leonard, perhaps informed that winning the MVP would mean that he’d be expected to give a public speech, played the least inspired first quarter I’ve seen from him in possibly ever, before eventually remembering that he is Kawhi Leonard and ramping up his engines. The Jazz built a 23-6 edge in points off turnovers, second chance points and points in the paint; and they even nailed 4-of-7 threes, with Rodney Hood banking in a 30-footer at the buzzer to take a 32-23 lead after one.

Both teams settled down a bit after that in the second quarter, though the Spurs ball movement was still nowhere to be found. Boris Diaw was eating David Lee’s lunch (wonk wonk) again and Derrick Favors got a few buckets inside while Aldridge answered with 10 for the Spurs. It was the kind of quarter where if anyone can recall a single specific detail a week from now, you’re lying.

The third period was mostly alarming. The defense was M.I.A., to the degree that Jazz color man Matt Harpring was making it sound like Utah’s starting five could give the Warriors a run for their money in the playoffs. Gordon Hayward was nailing tough step-backs, Gobert was cleaning up around the rim on drive-and-kicks and Joe Ingles canned a pair of threes. All the Spurs had going for them in response was Parker and Gasol. It turned out to be a 29-26 quarter for the Jazz, but it was only that close because they called off the dogs early.

While we’re here, a quick word about Gasol: He didn’t score too many of his 20,001 career points with the Spurs, but let’s take a moment to recognize truly one of the most underrated players of this or any other generation. Look at the company the Spaniard’s in:

Pau Gasol is just the sixth player in NBA history born outside of the United States to reach 20,000 career points. pic.twitter.com/7Lgvmothmu

(For what it’s worth, Duncan, Olajuwon and Ewing all wound up competing for USA internationally and Wilkins, an actual American who just happened to be born abroad, would’ve had he the chance.)

Gasol is as skilled a big-man as we’ve ever seen and not only is he a sure-fire first-ballot Hall-of-Famer but I will go to my grave believing it was criminal that voters gave Kobe Bryant the 2010 Finals MVP over him. It was even more of an injustice than Ginobili getting robbed in 2005, and I’m not about to get over that one anytime soon, either.

Anyway, even though Gasol’s scored more points against the Spurs in his career than for them than for them —852 to 792, not counting the playoffs— he’s someone whose game I’ve always enjoyed from afar and someone I’ve wished was a Spur forever. I’m happy I got to enjoy him on the team, better late than never.

This might’ve been the final regular season game of Ginobili’s career too, but I’m trying not to think about that. I’ve been wrong the last two years and he hinted to Jabari Young of the Express-News that it’s not the foregone conclusion most believe it to be.

Okay, time to wrap this up with the only actual interesting thing about the game, besides, again, that there were no injuries to report.

I think Davis Bertans represents the only hope the Spurs have to surprise some people. While I appreciate Lee’s hustle and efforts around the glass, he’s not going to cause any mismatches on defense. Bertans, with his unlimited range and ability to blow by people who rush out at him, is the most intriguing young player on the roster. Simmons can change games with his raw athleticism and penchant for making plays above the rim at both ends, but he’s too mistake prone to be counted on. He’s a turnover machine, a foul magnet and his three-pointer is rickety. Kyle Anderson has a better basketball I.Q., but no quickness at all and worse still no dog in him when the stakes are highest. They’re both forever competing for the 10th-man role when the correct answer will forever be “nah, just play Leonard more.”

The more interesting calculus to me is how the Spurs can change with Bertans in Lee’s spot. He can change the shape of defenses in ways Lee cannot, like a supercharged Red Rocket. I’m not sure how much of a “secret” he is at this stage, but I think he can give people more problems in the playoffs than Lee can and I’m hopeful he gets the opportunity. roblems