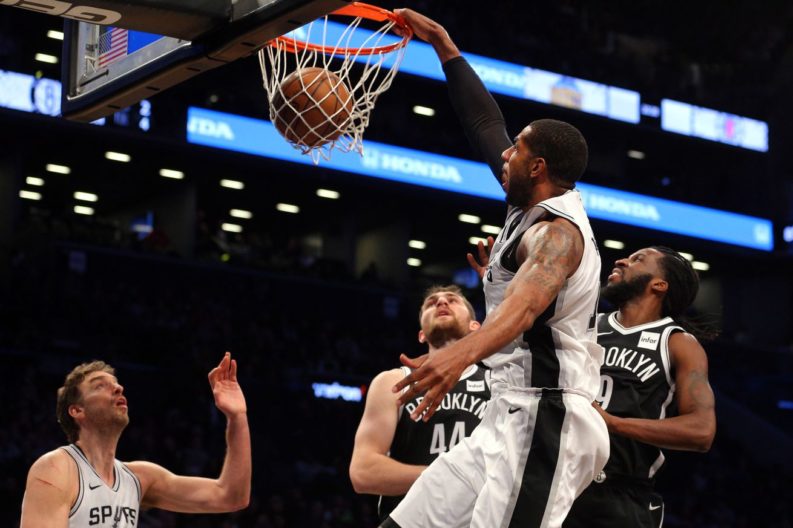 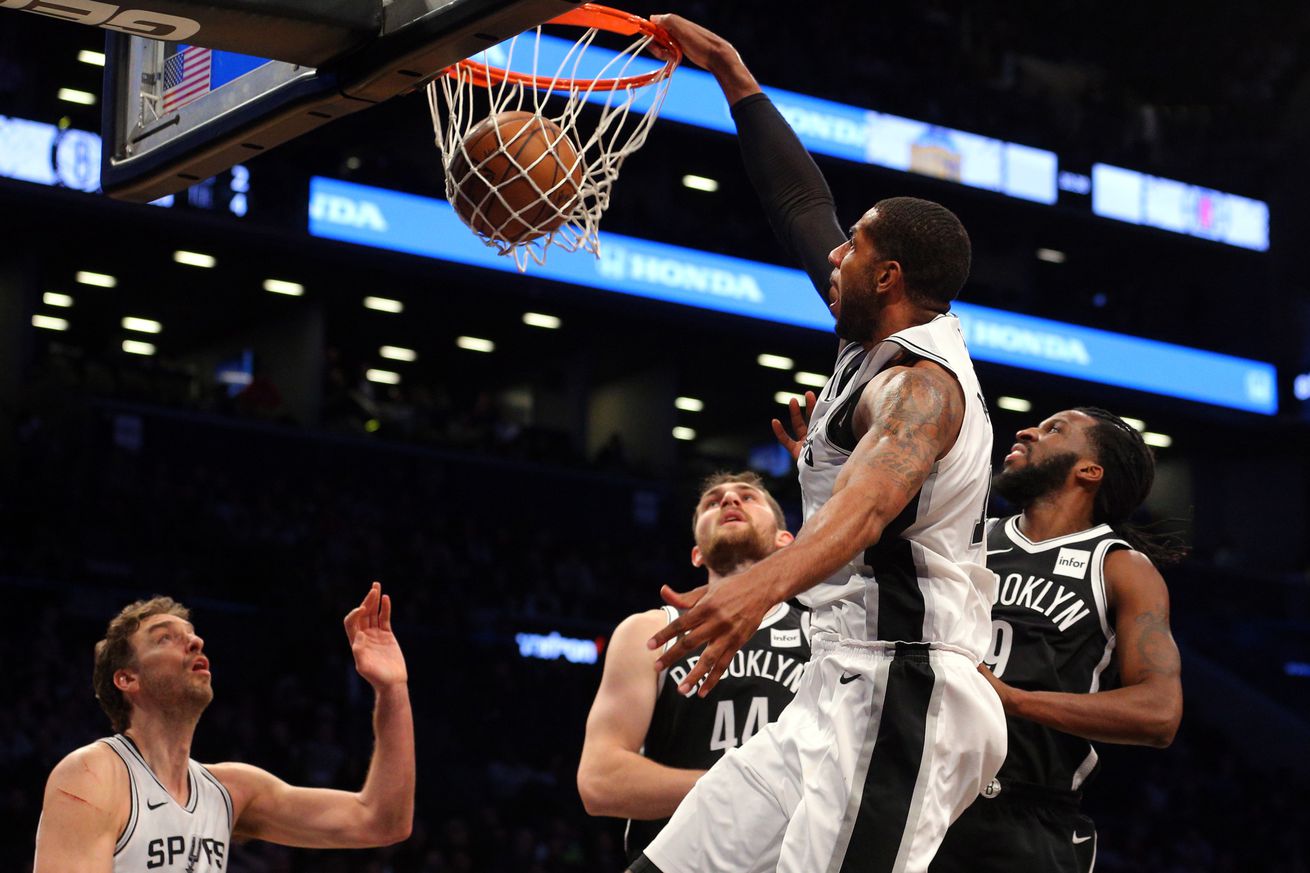 After what threatened to become a Spurs blowout, the Brooklyn Nets used some 3-point shooting and ferocious effort to get back into the game. But San Antonio did what they have done so well this season: make the other team play smart for 48 minutes, dominate the paint, and let LaMarcus Aldridge be the best player on the floor.

Pace is everything for the methodical Spurs, especially when playmakers like Kawhi Leonard, Rudy Gay, and Manu Ginobili are sitting out due to injury. Against a young, athletic, and high-energy squad like the Nets, the Spurs were able to get out to big lead through a massive size advantage down low and smart defense. Then they eventually held off a furious Nets comeback attempt in the fourth quarter doing the things that got them the lead in the first place.

Aldridge continued to look like one of the best big men in the game, finishing with 34 points and 8 rebounds, and repeatedly bullied his way into the paint for hook shots, layups, dunks, and his patented fadeaway jumpers. He is having his best season as a Spur and should receive a hat tip in the MVP discussion at some point. As a top-three seed out west without their best player, the Spurs’ ability to continuously win games is remarkable.

All game long, the Spurs’ offense subsisted on hot shooting from Aldridge, Patty Mills and Gasol, who combined for 8-10 shooting from 3 and 25-42 shooting overall. The offense hummed when those three were involved, and Brooklyn’s only answer was to get hot from 3 and amp up the speed of the game.

When Mills shoots well, the Spurs look like a completely different team. Tony Parker is undoubtedly the best floor general on the roster, but Mills’ ability to get scorching hot from downtown transforms the offense and opens up the floor for everybody else. He was the fireball off the bench in the 2014 championship run, and he was the player the Warriors assigned Klay Thompson to last playoffs. He is a bit overmatched to start for an NBA team, but he is among the very best backup guards in the league.

With a diminished rotation, Pop turned to playing a Mills-Bryn Forbes-Dejounte Murray lineup, to mostly positive results. The lineup is a handful for two reasons: first, the speed of that trio is tough to control. As the league downsizes and perimeter play is more valued, this is a nice wild card to keep in the back pocket. In today’s NBA, speed is often valued over size, especially on the perimeter, and should a team favor an up-and-down style of play, a Mills-Forbes-Murray trio could keep up in a track meet.

The second reason this lineup intrigues is the placement of everyone on the offensive end of the floor. With Forbes and Mills spreading the floor, a player such as Davis Bertans or Kyle Anderson in the forward spot, along with an offensive hub like Aldridge or Gasol in the post, Murray suddenly has all the space in the world to attack the basket and hunt down offensive boards. Teams will sag off him all they want because he cannot shoot, but as he progresses and develops, his one-on-one play with four other floor spacers could become a go-to in selective matchups.

Old veteran Tony Parker does not have the burst or finishing ability that he did in his prime, but against the Nets, he showed that he is still capable of finding his own shot against bigger defenders. He shot 3-12 and struggled to convert once he got into the paint, but he repeatedly found himself in position to hit his patented floater after blowing by the defense. Sometimes shots do not fall, and lucky for the Spurs, Parker’s shot making is not as important as once was.

For all his deficiencies, 37-year-old Pau Gasol has a skillset unlike almost any other big man in the league. He’s one of the best passing big men in NBA history, he has smartly leveraged his length to make up for his foot speed, and his sweet shooting now consistently stretches to the 3-point line, which also drags any post help defender for Aldridge out to the 3-point line. The Spurs were mocked for the hefty contract they handed out to Pau, but he has proven to be a much more effective presence on the floor than the many people give him credit for.

The Nets very much look like an up-and-coming version of the Spurs, minus any superstars. They are going to be good sooner rather than later, and their ability to push the Spurs late in the game is evidence of that. The news of Kawhi Leonard’s indefinite absence is frustrating, but the Spurs can learn a lot from what the Nets are doing this season: each game is an opportunity to practice controlling pace, and each game is an opportunity to let the young guys get some work in.